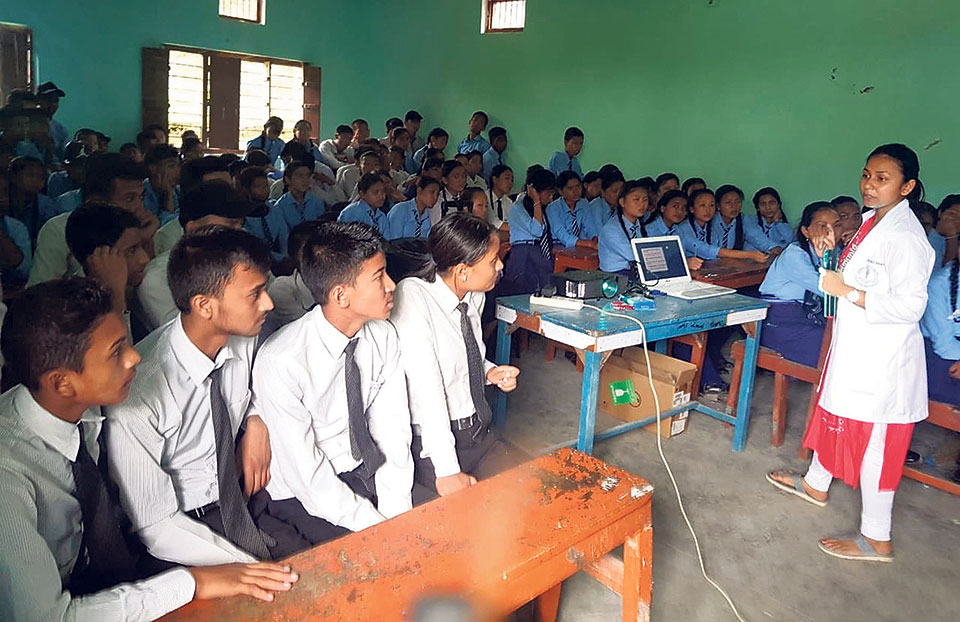 A member of the rapid response team formed to tackle the dengue outbreak in Dharan teaching a class about dengue on Monday.

DHARAN, June 11: Five days ago, a search and destroy campaign was launched in Dharan to bring the dengue outbreak under control. Local representatives, health workers, and various organizations were actively involved in destroying the larva of the mosquitoes that transmit dengue.

However, the campaign has failed to bring dengue under control.

With each passing day, the number of dengue patients has been increasing at the Dharan-based BP Koirala Institute of Health Sciences (BPKIHS).

Records maintained by BPKIHS show that so far 368 people coming to the hospital for checkups have tested positive for dengue. Adding the number of patients coming to Bijayapur Hospital, more than 400 people have now been infected.

“A search and destroy campaign is taking place at all local units but the dengue epidemic remains out of control,” said Dr Bijayaraj Khanal, coordinator of the Rapid Response Team (RRT), adding, “A large number of people are still coming for checkups from Ward No 15, which has been declared a crisis area.”

Schools launch campaign against dengue
As the search and destroy campaign could not make sufficient impact, doctors and the RRT have started conducting awareness campaigns at schools. Teachers and students of various community and private schools will be taught about ways to prevent dengue and destroy the mosquito larva. PABSON and N-PABSON have also extended their co-operation.

On Monday, an RRT team reached different schools to spread awareness of the disease. “School children are at high risk. If they are made more aware, they will also teach their parents, siblings, and neighbors, which will make it easier to bring the dengue under control,” said Maheshwar Rai, a member of the RRT. According to doctors, children below 14 and adults above 60 are especially prone to dengue.

Provincial government sanctions Rs. 8 million
Province 1 has allocated Rs 8 million for preventing dengue and helping in the treatment of patients. When asked about this by journalists, Chief Minister Sherdhan Rai informed about the budget allocation.

Dhruba Subedi, press advisor to Rai, informed Republica that the budget has been allocated for providing free treatment at BPKIHS and also for purchasing two more ventilators. He added that Rs. 3 million will be provided to the District Health Office. “The decision in this connection was taken by the provincial assembly,” he said.