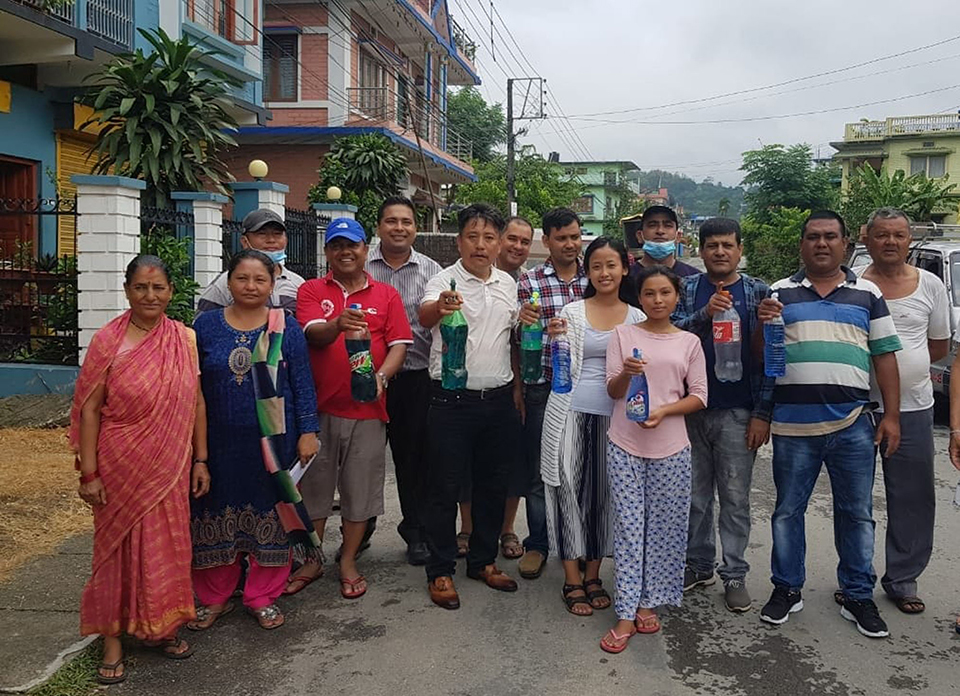 Rohit Rai/Republica Residents and representatives take part in a seek and destroy campaign for destroying dengue habitats and larva in Ward 15 of the Dharan Sub-Metropolitan City in this recent picture.

DHARAN, June 9: A blood test conducted in B.P Koirala Institute of Health and Sciences (BPKIHS) on May 14 tested positive for dengue. According to the advice given by doctors, two machines were imported and fogging was carried in the locality.

Dengue patients were also discovered earlier in 2016 and 2017. At the time, spreading of the disease was prevented by fogging in high-risk areas. Doctors and local representatives hoped that fogging would be effective this year as well.

However, it looks like the spread of the disease was not contained with fogging as the numbers of patients have kept increasing by the day. It has now spread to other areas as well.

Despite regular fogging, dengue hasn't been controlled and circumstances in the sub-metropolitan have worsened. Through coordination between BPKIHS and the sub-metropolitan, experts at the Institute assembled a response team for dengue outbreak control on May 29.

Coordinator of this team, Dr Bijaya Kumar Khanal said, “In previous years, only a few cases were identified but this year, the disease has spread like an epidemic.”

According to hospital administration, as of Saturday, a total of 852 were tested for dengue fever and results were positive for 281 patients. “Dengue hasn't been controlled and this is a serious concern”, Dr Bikash Shah said adding, “It is important that the campaign for eliminating dengue be intensified.” High-risk wards 15 and 8 have already been declared crisis-hit areas.

Dengue fever, which is usually observed post monsoon, spread earlier this year. Dharan faces an acute shortage of drinking water. Locals and hoteliers usually store water in drums and tanks which remain in the open, where mosquitoes are easily able to lay eggs and grow their larvae which infect the water.

According to doctors, mosquitoes, namely Aedes aegypti and Aedes albopictus, are responsible for transferring the dengue virus from person to person. Early symptoms of the disease include fever, severe muscle and joint pain, pain behind the eye, nausea and vomiting and rashes which appear a few days after the onset of fever.

In its test, BPKIHS has found patients at the hospital have been infected by two types of dengue virus. Dr Narayan Bhattarai, professor at the microbiology department of the hospital, informed that there are four types of virus. “As long as a person is infected by only one virus, risks are minimal but if the same individual is infected by a different virus a second time, it's dangerous,” Bhattarai said.

As fogging hasn't been very effective, experts have suggested taking initiatives for deploying teams to destroy mosquito habitats and larvas. As a response, local representatives and sub-metropolitan officials have launched a search and destroy campaign.

BIRATNAGAR, June 23: After infecting hundreds of people in Dharan, the dengue outbreak has started spreading aggressively in other parts... Read More...