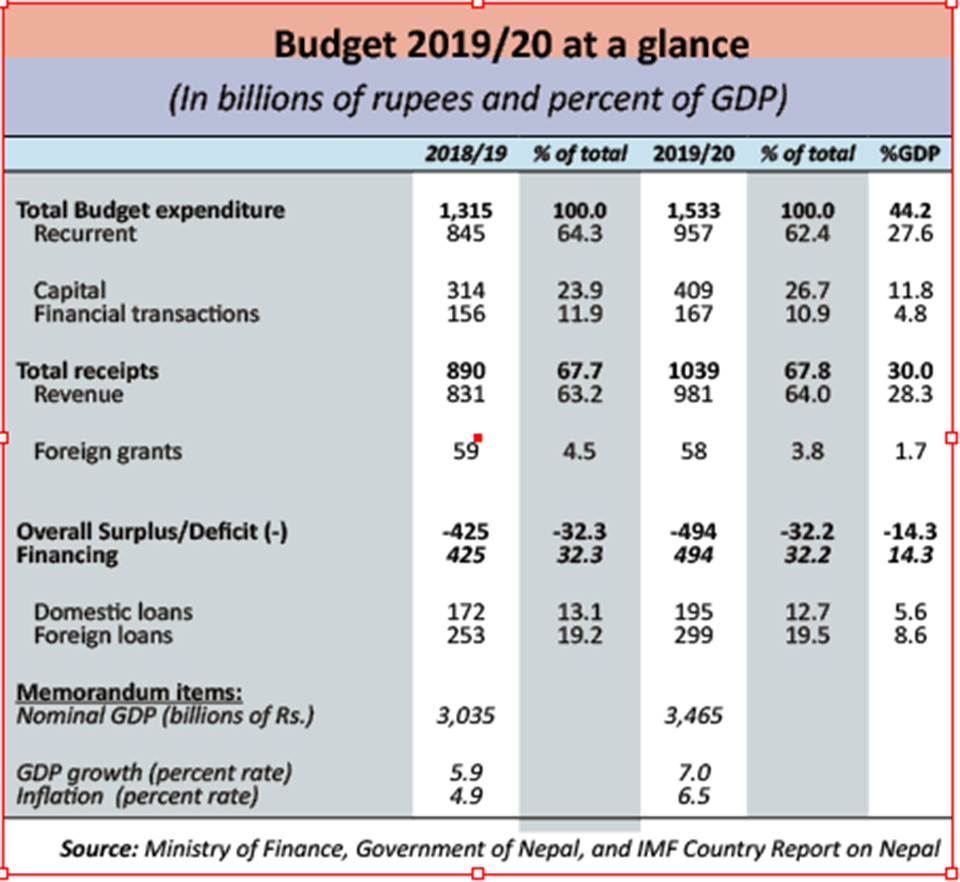 Finance Minister Yuba Raj Khatiwada unveiled the budget for this fiscal year on May 29, more than a month before the start of new fiscal year on July 14. One month plus period allowed for discussion, debate, and possible revisions on budget needs to be commended for the reason that most previous budgets were presented just a week or less in advance which made it seem like an act of formality with no room for review and revisions. The new tradition will hopefully create a situation for all stakeholders to provide inputs for final version.

To get an understanding of leery details of financial and policy overview provided in the budget, we can start with a few key numbers that comprise, in the main part, expenditure, revenue, and budget deficit or surplus that together gives a macroeconomic perspective of the budget’s impact on the economy. We can review these numbers in absolute term or in relation to Gross Domestic Product (GDP) but the latter is more appropriate way of understanding their significance and how they impact the larger economy.

Now, assuming that the stated amounts in the budget are accurate, all the key numbers seem extraordinary—revenue, expenditure and budget balance—of the like rarely found in a normal economy adhering to financial discipline. For example, total expenditure for 2019/20 is marked at Rs, 1,533 billion, which is a 17 percent increase over the current year allocation of Rs. 1,315 billion. However, the size of expenditure allocation becomes more meaningful if looked at in terms of GDP, which is 44 percent—unusual for a market or mixed market economy. This size of expenditure-GDP ratio means that of every rupee spent in the economy, about half of it comes from the government spending, a feature uncommon by any measure.

Expenditure allocation is broken down between recurrent and capital items which, respectively, are for meeting government’s day-to-day needs and for public investment funding. Roughly two-thirds of expenditures are allocated for current items and one fourth for capital items—roads, bridges, electric grid, water supply, and other infrastructure items that, in most part, determine the growth rate of the economy. The current/capital divide is comparable to other similar countries but for meeting an ambitious growth target of seven percent, a 12 percent of GDP allocation for capital items seems rather inadequate.

On the revenue side, tax and nontax revenues together are projected to increase by 18 percent. Like the expenditure projection, that is also ambitious and unrealistic. This is because the revenue number exceeds growth projections for GDP by at least five percentage points in real terms which, from all perspectives, look impossible unless the government raises the tax rates substantially and finds new taxing sources.

A part of revenue is derived from foreign grants but Rs 58 billion projected for 2019/20 (less than two percent of GDP) is quite small, given the size of emerging gap in revenue-expenditure balance.

Indeed, this gap called budget deficit, also looks historic at 14.3 percent of GDP which comes close to one third of total expenditure, meaning that of each rupee to be spent by the government during 2019/20, one third of it will be from borrowed resources. This will comprise borrowings from domestic and foreign sources which together amounts to nearly Rs 500 billion, all of which will increase the government’s outstanding debt, a generational burden.

According to preliminary budget report, the government sets 12 key priorities which, generally, should convey some urgent requirement items that are the key to increasing growth and improving living standard. However, the budget takes a different route to setting priorities which includes expenditure allocations for important Ministries and Departments. The budget presentation, however, doesn’t mention what exactly are priority items in these Ministries or Departments.

There is a room to doubt government’s understanding of concept of budget priorities which, certainly, isn’t how the budget gets allocated among the functional expenditure items. For prioritizing expenditures, the government must select, among numerous claims on budget, some key items by applying the concept of priorities, like potential benefits to social wellbeing and to economic growth. There is no evidence that priority items have been chosen on the basis of comparing their relative benefits and, further, that a technically sound list of priority items doesn’t exist.

Finally, implication of debt that government is accumulating with each budget cycle needs mentioning. There is no discussion of how the targeted budget deficit gets determined except in the arithmetic sense of revenue minus expenditures. Analytically, all of the expenditure items are to be carefully evaluated against expected revenue amount that government seeks to raise to fund them. At the balance of two sides, any further addition to the list must justify that incurrence of the deficit equals the extra cost of servicing the debt and that deficit doesn’t lead to inflationary pressures.

There is a convincing reason to believe that no such cost-benefit evaluation of the expected budget deficit gets considered and the only restraint on the size of the deficit is how much the government can borrow from foreign lenders and get domestic funding. It isn’t quite known if financial institutions get pressured to lend to the government but, with limited other financing options available, such a possibility can’t be ruled out.

National budgets are designed to meet the selected needs of the population, specifically those that individuals or families can’t meet themselves or can do so only at very high cost. This entitles the government to claim a part of their incomes in tax revenue and also get funding through borrowing, generally for those items that benefit the society over long periods, mainly the capital items.

One striking feature of Nepal budgeting has been that almost the entire amount of revenue collected from domestic sources gets spent for recurrent expenditures, meaning that all of capital expenditures are financed from foreign grants, local and foreign borrowings, and none of it out of budget savings. It isn’t then convincing that government is seriously committed to promoting growth and seeking expedited development, which is needed for the country to exit its current Least Developed Country status.

Also, looking at the country’s utilization of its capital resources, we find scarce evidence of much work having been done on development projects—roads, bridges, rail lines, airports, irrigation, public sanitation, water supply, education and health facilities and the like—and further that most of those undertaken remains unfinished, are of shoddy quality, and, in quite a number of cases, projects get completed just on paper, with nothing existing on the ground. Most alarmingly, work on the most visible and supremely important Kathmandu’s Melamchi Drinking Water Project has now proceeded for over decades, money spent many times above the original estimate, but its completion and utilization remains remote and uncertain.

Finally, looking at the government-for-government scenario, we can safely envisage a very narrow group of people—those directly and indirectly attached to government in any capacity, from salaried officials, to contractors and middlemen, to politicians in power, altogether may be a million—are the major beneficiaries of the government budget. If Rs.1,533 billion allocation for the 2019/20 budget gets cornered by just one million people, average payment per recipient comes to Rs1,530,000 or 1.3 lakhs rupees on a monthly basis.

A very small amount of cash payments are made to pensioners and elderly people which, however, doesn’t change the overall picture for relatively very few are the main beneficiaries of government budget largesse, with almost total exclusion of those who aren’t working for government or not attached to the government institutions. At the maximum and including dependents of the beneficiaries, about five million people—one-sixth of the population—benefit from budget spending, while those outside of this privileged group lose out completely.

It is then difficult to justify why the government is needed to exist in Nepal except for a bare bone of it—for keeping the law and order and doing little of anything else. In fact, this was the governing style that characterized the Rana regime which collected revenue just for its own upkeep. Given the systemic abuse of public money in the current liberalized regime, there is a strong case for going back to the governance system that had then existed under the Ranas. With such a turning back, the general public will be able to keep much of the nearly one trillion rupees—Rs.33,000 per person or Rs. 2 lakhs per household—that it now must surrender to government in tax and nontax assessments for which they get very little in quid pro quo payback.

The author was a Senior Economist at IMF in Washington DC