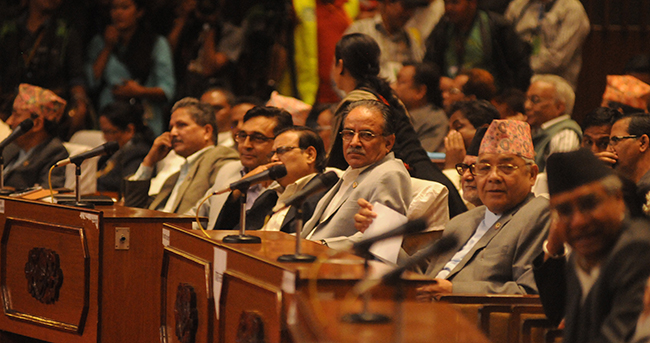 It is sad that despite all the political upheavals and fiery speeches delivered to the public, no serious case has been made to trim the size of parliament and the government.

I do not know how many of you will share my view but I believe that Nepal is practicing a form of idiotic and irresponsible statecraft. For example, there is no justification for the county carrying the load of an oversized legislature.

Nepal had a total of 109 MPs in its first democratically elected parliament in 1959. Democracy was dissolved in 1960 and we do not know much about how Nepal was governed during the 30 years of King's rule, except only that the King’s dictate was used to rule the country and nothing else mattered.
Then in 1990, democracy was restored and the first parliament in1991 had a total of 205 seats, almost double the number of 1959 parliament.

Now in the current parliament, the number of members in the Lower House is 275 and the National Assembly—the Upper House—has 59 members in it.

Look at Italy, which is much larger and much richer than Nepal. On May 22, Italy voted to reduce the numbers of MPs in the lower house from 634 to 400. Total number of MPs and senators is expected to be cut from 945 to 600. Voting outcome from 69 percent of voters shows the support for the reduction in numbers, cutting the size by about a third.

All these data show that Nepal has been overdoing with the number of deputies it has in parliament after the change to republican regime in 2008. There is no explanation why the size of parliament has been steadily increased with some slowdown since 2013 but still the 300-member plus size parliament for Nepal doesn’t look right.

It is hard to justify the growth in population as reason for the increase in parliament size. Population increased from about 10 million in 1960 to may be 27 million by 2017. This is less than three times increase whereas the parliament size currently above 300 is three times larger.

However, a more rational view about a country’s parliament size needs to be its affordability. In a country having just over $1.25 daily poverty wage—benchmark for poverty level income level globally—how much is it justified to have a burden of 100 times larger in salaries and allowances paid to each of the parliament member? And that is only the tip of the iceberg, in terms of the total cost of supporting unneeded and useless parliament members. Consider the multiple times money spent in the upkeep of parliament’s subsidiary employees attached to taking care of parliament supporting staff and facilities.

All this together along with salaries and allowances of government workforce—including police, army and diplomatic personnel—it is a trillion rupees now in a total Rs, 1,5 trillion budget spending in 2019/20. All these can be cut by half or ideally by two thirds and no harm will be done to society or the national economy.

Finally, several years ago during the time of deliberation on 2015 constitution, I had proposed having just 100 numbers in the Lower House (and no Upper House) on the basis of one seat for each of 75 districts and 25 seats allocated for the districts with largest-size population. However, in an ethnic and race conscious Nepal, almost all of the population-based 25 seats going to Madhes districts would be a nonstarter for the country's Pahade masters to bear.

It is truly sad that despite all the political upheavals and fiery speeches delivered to the public, no serious case has been made to trim the size of the parliament and the government—from the province to the federal levels—and the money it eats up annually. Such ignorance of the economy and of economic issues in general is no way to run a country and to justify its legitimacy.

One huge mistake of our new democracy is its oversized parliament. It is just political greed and authoritarianism run amok.

Let’s bring in remittance as much as we can through skills but not at the cost of our emotional wellbeing Read More...