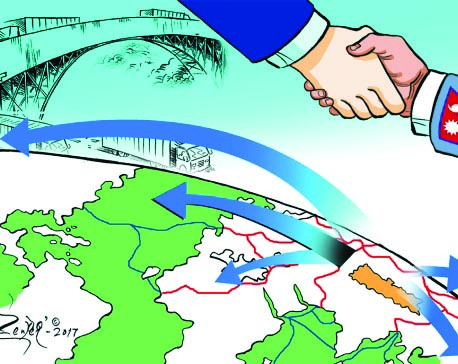 As a landlocked country, trade and route diversification should be the primary foreign policy objective for Nepal. This not only positively helps the country for its economic growth and competition for the economic initiative, but also increases its bargaining capacity.  It can have a significant political impact on politico-economic stability of Nepal. However, how to proceed with the route diversification is a debated topic in Nepal as it happens in most landlocked countries.

Also, continuous, cohesive diplomacy of India directly and significantly affects Nepal’s independent statehood and its operational autonomy. Politically conscious Nepalis do not forget 1973, 1989 and 2015 (the years of Indian blockade on Nepal). In this context, China’s Belt and Road Initiative (BRI) came to Nepal as trauma-healing opportunity and, by acceding to it, Nepal believes, it will bring a long term positive impact on its trade and political diplomacy. Political pundits of Kathmandu consider BRI as everything and try to analyze Nepal’s signature on BRI as a reply to India’s sledgehammer diplomacy. I, however, argue that BRI per se does not bring the paradigm shift to Nepal’s economy until Nepal is clear on how to use it and how to balance the regional politics. I have three reasons to say this.

First, Nepal’s southward sloppy geography and the regional geopolitics compel the landlocked country to be closer to India more than China. Almost all of Nepal’s international trade goes through Kolkota and Haldiya seaport of India and more than two third of its trade is with India. Nepal cannot abruptly disregard its close relations with India to advance its relations with the northern neighbor. Geopolitics does not allow this.

Second, BRI, which is a brainchild of President Xi Jinping, is itself a developing concept, which is brought mainly to achieve China’s foreign policy objective of “the great rejuvenation of the Chinese nations.” China develops BRI primarily for its interest to improve its position by increasing its influence in the international community led by the United States. Policies about BRI are still being developed, and the cooperative system with other nations related to its implementation is still being created. It has already encountered criticism by the West and other countries of the global south including Nepal’s neighbor India. The estimated funds of six trillion dollars are yet to be secured, and the policy needs to be clarified. Questions like who contributes how much, in what procedure and when are yet in the developing phase. The debate in Nepal, however, develops as if BRI can immediately help Nepal’s path to economic development in the upcoming few years. The fact-based analysis that policymakers and intellectuals in Kathmandu need is missing. Neither Nepal is the primary contributing state of BRI, nor major routes of BRI go through Nepal. Nepal gets some feeder road if it really gets something.  It is, thus, essential for Nepal to promote healthy debate on the pros and cons of BRI on Nepal’s sovereignty, strategic autonomy, and its traditional policy of non-alliance. To argue that China will do everything without the basic knowledge of how bilateral diplomacy works is to display political ignorance and incompetence.

Third, obtaining the funds for BRI is another challenge for China, for it neither can nor willing to contribute all of the cost solely by itself. For that, direct contribution by the member states and the incorporating projects into the national strategy is needed. Money has always been the central issue of contention in all major bilateral and multilateral projects. BRI, of course, will be no exception. As a universal economic principle, no one becomes interested in investing in projects that are not sure to give economic returns. Professor Rumi Aoyama in her journal article “One Belt, One Road: China’s New Global Strategy” gives an example of how the Hu Jintao administration delayed the Pakistan-Xinging pipeline project as it was anticipated to incur significant cost.

Let us come down to Nepal. In recent days rail link between Nepal and China is the discussion in almost all teashops in Kathmandu. It has become a new political tool for the political parties to gather a mass for their usual rattling of discussion. Most of the discussion is baseless as none of them are supported by the facts, researches and studies. Some ‘intellectuals’ have even published some books on the issue. However, they fail to analyze that no country invests in projects which are not in their strategic priority. It is the fundamental principle of international economic diplomacy.

Nepal-China railway, which Nepal is enthusiastic about, does not significantly serve China’s economic and geopolitical interest, which has already been made clear by the Chinese ambassador through her diplomatic and carefully chosen words. There is no guarantee of revenue from Nepal-China railway, and also there is a geopolitical risk that China has to play merely because India would not be pleased with China’s rail in its ‘sphere of influence’. China, on the other hand, of course, does not want to upset India by making Nepal unnecessarily closer to it, as China will get far more from India in all fronts than from poor and underdeveloped landlocked Nepal.

All these geopolitics, economic profitability analysis, and the premature BRI policy do not bring a paradigm shift to Nepal’s economy and its political autonomy. This, however, does not imply that Nepal should not go for BRI. As Nepal is already a signatory, it will, of course, become helpful to some extent to diversify its trade and help to decrease dependence on India. However, for that to achieve, Nepal needs to mainstream the debate and analytically distinguish the pros and cons of the BRI for Nepal’s long-term economic growth, political stability, non-alliance and operational autonomy.

The author is a Doctoral Candidate at Department of International Relations, South Asian University, New Delhi