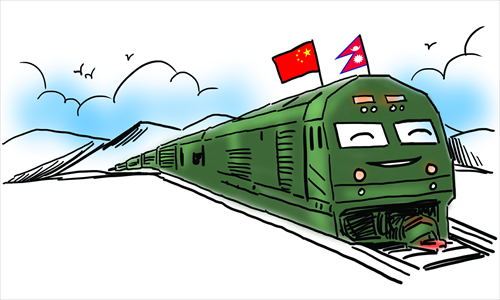 Congress for funding project only through grants

While the main opposition party has categorically stated that Nepal should develop the cross-country railroad only through grants, the ruling NCP is in favor of expediting the project even if it requires taking loans.

This comes barely a week after Nepal-China Trans-Himalayan Multi-Dimensional Connectivity Network and Nepal-China Cross Border Railway projects were incorporated in the joint communique issued after the conclusion of the second Belt and Rom for International Cooperation in Beijing.

This comes barely a week after Nepal-China Trans-Himalayan Multi-Dimensional Connectivity Network and Nepal-China Cross Border Railway projects were incorporated in the joint communique issued after the conclusion of the second Belt and Road Forum for International Cooperation held in Beijing. Nepal has yet to work out the method to fund both of the mega projects.

Commenting on the government's policy and program in parliament on Sunday, NC President Sher Bahadur Deuba said that Nepal should develop the project only if Beijing offers grant. “Given that the railroads connecting India and China are equally important for us, our position is that both the projects should be funded only through grants,” Deuba said in parliament on Sunday.

The policy and program unveiled by President Bidya Bhandari in the joint sitting of parliament on Friday states that the trans-border railroads with both China and India will be started in two years.

NC has maintained that Nepal, a small country with an economy worth around US$ 12 billion, cannot afford to fund multi-billion-dollar projects through loans. “But the government appears oblivious about the project's feasibility, funds, the returns and benefits,” Deuba said while criticizing the government for selecting projects on whim.

Although the Nepali side has long been requesting China to build the railway through grant, the Chinese side has remained silent on the funding issue. Many Chinese scholars have been saying in public that China would not be in position to develop the infrastructure requiring investment of several billions of dollars only on grants basis.

As the current government led by KP Oli has lately hinted that it is ready to bear a certain portion of the construction cost of the railroad with China, the position maintained by the main opposition party is likely to further divide the major parties over the project.

Speaking at a function in the capital recently, Foreign Minister Pradeep Gyawali said that the claims that Nepal will fall into a Chinese debt trap if the BRI projects are funded through loans, were biased. Gyawali also challenged those talking about debt trap to find 'charitable organizations that would provide interest-free loans'.

Nepal signed up to the China's BRI in May 2017 amid discomfort of India and major Western powers.

Earlier, government officials in Kathmandu said that Rs 35 billion will be needed to prepare the detailed project report (DPR) alone for the Kathmandu-Kerung railroad project. It is estimated that it will cost around US$ 2.75 billion to lay the 73-km section of the railroad that falls on the Nepali side.

Ruling NCP during its election campaign had made railway connectivity with China as a major agenda, which many political analysts believe played important role in its electoral success. While the ruling party is in favor of expediting the project seen as a means to break Nepal's sole dependence on India for the third country trade and transit, the main opposition party appears concerned over a possible debt trap.

Is the ruling alliance pulling an ‘election stunt’ in Nijgadh?
18 minutes ago