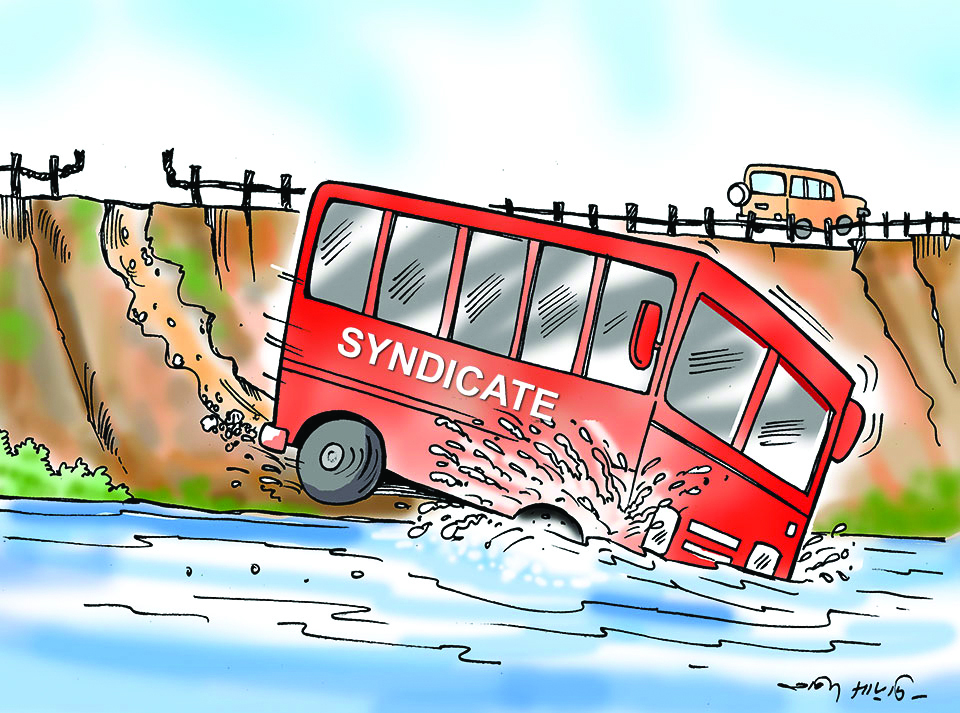 As long as the market-related inefficiencies that actually gave rise to syndicates remain, the transportation syndicates will rise again, in one form or another

Syndicates are bad. They increase price of services, often by restricting supply as well as setting artificially high price. Economists generally agree that under certain regularity conditions, competitive market is efficient except either in the sectors exhibiting increasing return to scale or in the sectors producing public goods.  Yet syndicates seem to be everywhere at least in the early stages of market economy. In America, the McClellan Committee of the US senate in the late 1950s cited the presence of syndicates (racketeering) among carpenters, textile workers, teamster unions, engineers, butchers and bakers, among others. Nepal has similar situation. The most famous among the syndicates are transportation industry syndicates. During the pre-festival season, they are often in the news for a bad reason. Bus syndicates make it difficult for passengers to go home while truck syndicates are accused of making goods expensive. How do we deal with them?

First, it is important to realize that syndicates are not alone. Take for example the trucking syndicates operating in Birgunj customs yard. There are also syndicates of customs agents and loaders who help in transshipment of goods. So, even if your trucking service is competitively secured, good luck dealing with other syndicates. Even after the truck exits the customs yard, there are layers of government agencies and randomly placed weigh stations owned by local goons. So, when the government removes the trucking industry syndicates, it is merely addressing one layer among a complex maze of syndicates.  It is like peeling onions—once a layer is removed, the other layers become more prominent. Fighting a syndicate requires political-economic conviction that all non-competitive behaviors are bad, and that this fight will be continuous and long-drawn.

Second, transportation syndicates, also called Transport Entrepreneurs Association (TEA), are run by insecure individuals. Many TEA members are formerly poor individuals who entered the industry as helpers. A study by Kathmandu University School of Management researchers looked at around 1000 truck owners (about ten percent of total) in 2015. It found that seventy percent of them previously worked in the transportation industry and had no other salable skill. Since they worked their way up to become truck owners, they were fiercely protective of their business. Selling the truck was not an option for them. While an average truck owner owned 2.4 trucks, the median owner owned only one. Furthermore, the more intense types of syndicates (in terms of price distortion) were positively associated with the routes that had older trucks. The owners were desperately trying to make a profit out of their sole significant asset.

But have we overestimated the impact of these transportation syndicates in the economy? The answer is yes. While they are bad for economy, they are not the only players in the market, and traders have different alternatives. Consider the consignments during the festival seasons. While festival season (September-November) is associated with more intense syndicates, many traders and importers outmaneuver the truckers by importing slightly earlier and storing goods in their warehouse. So, the upper bound of the impact of syndicates on price should be determined by the short term warehouse rentals which should not be significant.  This is where the traders and big industrialists further distort market. In the pretext of trucking industry syndicates, they set price that is often higher than the price that can be justified by the warehouse rentals. The study found that trucking industry syndicates were only responsible for 10 percent of the total rise in inflation. Other rise in prices was purely due to price gouging by the traders. The syndicates also affect GDP growth, but again marginally. In their absence, the GDP growth rate would have increased by about three percent. A six percent GDP growth, in the absence of trucking industry syndicates, would have resulted in the 6.18 percent.

Nepal’s trucking syndicates were actually started to address the incomplete insurance market. When highways (mainly East-West highway) opened around the 1970s in Nepal, the menu offered by the insurance companies had few options for truckers. The roads were bad, accidents were frequent, and trucking staffs were all novice. The response of accident victims were also disproportionate, sometimes leading to attempted lynching of the truck staffs by the angry mob. The truck owners were also unhappy about the sluggish pace of payment by the insurance companies. The truckers then realized that they could form an association, pool the risk, and start their own insurance fund. Furthermore, they could engage in collective bargaining with the government and victims. This model took off rather successfully. While the first TEA was registered in 1970s, the total number of TEAs reached at least 39 by 2015, and the associations cumulatively claimed membership of about 19000 trucks in the recognized 429 routes.

Truckers got all the attention and wrong publicity for two reasons. First, since their average education level was low, they were not well connected with media. Indeed, many individuals I talked to in media and department of Transportation Management remembered them as foul mouthed individuals difficult to deal with. Hence outside their immediate business circle, they had few friends. Second, they were directly in touch with the ordinary individuals in the street, unpopular, and thus easy and conspicuous target.

Nepali statecraft also generally fails to recognize that while changing a system is easy, improving it is hard. It requires systematic documentation of different features of the problems (including generation and processing of data periodically), policy experiments and their rigorous evaluation, and selection of better policies backed by evidence even when they contradict one’s belief.  Good governance is an art, perfected by perseverance, and it can hardly be imported and done in short period. Good researches can help. For example, there was heterogeneity in insurance services offered by different TEAs. One could exploit this heterogeneity in data to find the impact of improved menu in insurance services on the intensity of syndicates and then initiate reform in insurance market.

The government last year briefly started dealing with syndicates by banning the transportation associations. A frontal attack like that was good to show the intent. However, the beneficiaries are too distributed for it to be effective at this stage. The bureaucrats, for example, also traditionally benefit from the unions. The permit to operate in several routes comes only with the bribe. The survey found a bimodal distribution of bribe paid to get the permit, indicating while many pay only small amount of bribes, truckers in some lucrative routes pay significant amount of bribe, with many reporting to have paid as high as Rs 2,00,000 for a permit. It is in the interest of these officials to maintain such a barrier to entry.  So, the government was bound to face resistance from within.

As long as the market related inefficiencies that actually gave rise to syndicates remain, the syndicates will rise again in one form or another.  The survey showed that syndicates were popular with the truck owners, with 93 percent of the owners planning to renew their membership. The syndicate leaders were also making good amount of money as they corrupted their own insurance services. The racketeering and distribution of the ill gotten wealth among politicians, bureaucrats, and others by the beneficiaries of syndicates will ensure that favorable conditions for their rise continues for the foreseeable time. Hence, not only the government needs the conviction to crush all syndicates, but there should also be a stability of such conviction among the ruling politicians and bureaucrats. Now this is not a trivial thing to manage.