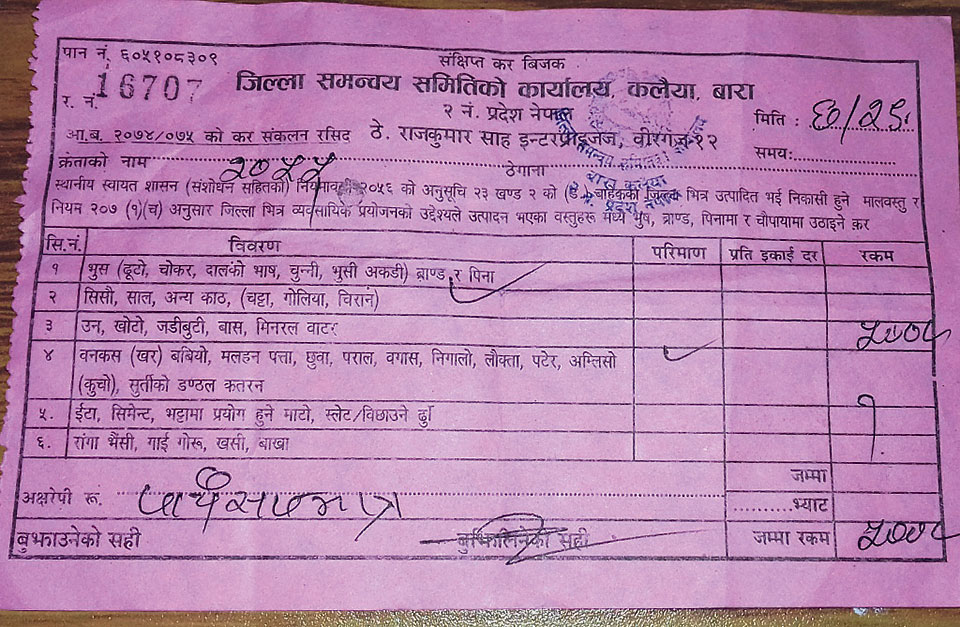 BARA, Oct 29: It has been found that tax contractors assigned by District Coordination Committees in different districts to collect taxes on agricultural products along the highways are charging taxes on the same product on multiple occasions. This is in violation of the law.

According to the Local Self Governance Regulation 2056 (1999) traders do not have to pay tax for the agricultural products twice. If they pay tax in one district, they can transport the products anywhere in the country without paying tax again.

However, the tax-collecting contractors, stationed along the highways, are forcefully charging taxes from vehicles carrying agricultural products as many times as possible.

On October 14, a truck with registration number Na 5 Kha 2055, carrying mustard cake left from Dang and arrived Kalaiya the next day. Along the way, the trader was charged agricultural tax by tax contractors in three different places in three districts.

Hamal said the latter two contractors misbehaved with him when he told them he had already paid tax and showed them the receipt.

“Even Nepal police and Armed Police Force act indifferent on this issue,” he said: “As nobody listens to us, we are forced to pay them as per their demand.”

Truck drivers claim that police receive commission from those contractors every month, which is why they refuse to take any action against them.

Bharat Bahadur Dhungana, chief of Bara DCC, said that traders do not have to pay tax twice. He further said that if any contractor was found collecting double taxes, then the DCC will take action against them.

POKHARA, May 21: The Pokhara Lekhnath Metropolitan City (PLMC) is to remove all the structures not meeting the stipulated standard... Read More...

DHANGADHI, May 25: It has already been seven years since a contracting company ‘Lama Sherpa Shalpa Biruwa JV’ was awarded the... Read More...

UML General Convention: Who secured how many votes?
21 hours ago

NRB investing Rs 1.10 billion in the fixed deposits of BFIs
19 hours ago

Snowfall forecast due to influence of Westerly trough
1 hour ago