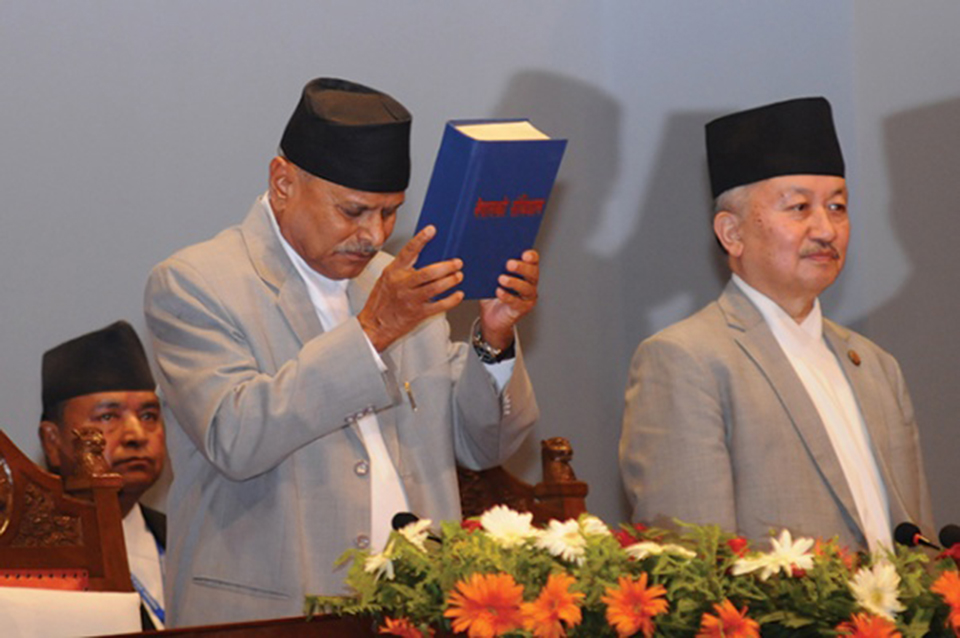 The framers of constitution of any country put national interest first. In doing so, they rely on normative structure of the country rather than adopting experience of outer world.  A constitutional democracy is not legally bound to adhere to international commitments at the cost of its sovereignty and integrity. For instance, the US accuses other nations of not adhering to human rights but it has so far failed to ratify International Covenant on Economic, Social and Cultural Rights (ICESCR, 1966) and Convention on Elimination of Discrimination against Women (CEDAW, 1979). The global super power has asserted on a number of occasions that these conventions contain a few provisions that could potentially question their sovereignty and integrity clauses.

Thus if Nepal has been reluctant to bring legal arrangements to adopt international norms citing its sovereignty conditions there is nothing wrong in it. Even India does not allow the people of other states to purchase property or carry out business.

When I was addressing a seminar held in Kathmandu on November 27, many had expected that I would come down heavily against Nepal’s constitution and say our constitution is the most regressive document. I did not, because constitution of Nepal is progressive on number of counts.

Even after three years of its promulgation and nearly two years of its implementation, many argue that Nepal’s constitution is worse than India’s. It is relevant here to compare these documents and see what they actually contain.

Our constitution has been praised for some of its progressive provisions. “Geographical size doesn’t matter. Even a small country can be a path finder of a new horizon, which becomes true with Nepal being the world’s first country that showed a new horizon to the whole world by recognizing the status of the transgender by including a third gender option in its census form in 2011,” writes Slomita Rai, an Indian researcher, in her LLM dissertation submitted to Uttaranchal University in 2015.

It’s the foremost fundamental document in Asia—and only the third in the world along with South Africa and Ecuador—to expressly guarantee the rights of transgender people. Article 12 confers an individual the right to seek citizenship certificate along with gender identity. An individual can choose his/her gender identity by his/her own declaration, without any third party intervention. In India, a person belonging to third gender is required to seek a medical certificate to acquire the status of ‘third gender.’

Nepal is also the first country in South Asia to explicitly recognize fundamental rights of sexual minorities. Ours is the first constitution is South Asia to include explicit mandate of one-third representation of women in legislative apparatus. This is a major breakthrough. It marks a new dawn for Nepali women. It’s a victory of equality over discrimination.

Nepal sets aside 33 percent of parliamentary seats for women through legislation. Article 86 (2) (a) ensures that three berths shall be given to women in 59-member National Assembly. India has been considering adopting similar constitutional framework since 1996. But it has not happened there yet.

Our charter institutes fair corpus of provisions for language as well. It has been provisioned that all the languages given by mother shall be national language (Article 6).  In doing so, the Republic disseminates a message to the world that every language spoken in Nepal is constitutionally equal. It’s not so in India. The constitution states that “official language of the Union shall be Hindi in Devnagari script.”

Article 344 of Indian Constitution commands the ‘Language Commission’ to make recommendations as to the progressive use of Hindi language for the official purpose of Union. Article 351 places an obligation on the central government to take steps to promote the spread and development of Hindi language. But, there is no any constitutional provision in Nepal that obliges any government agencies to promote and develop one particular language or restrict the use of another.

In India, a language could get official status in a state if it is spoken by a “substantial proportion of population.”

In Nepal, some Madhesi parties which brought their election manifesto in Hindi, have intensified efforts to enlist Hindi as one of the national languages of Nepal. They forget the fact that Hindi is spoken not even by one percent of Nepalis, let alone by a “substantial portion of population” as stated in Indian constitution. Constitution of Nepal has adopted a liberal approach regarding language policy-making. Even the provincial legislature has jurisdiction over language.

Unlike in India, right to language and culture has been recognized as a fundamental right in Nepal under Article 32. It means a person or community can knock the door of superior courts at the instance of violation of their right.

Nepal’s constitutional secularism requires the state to be neither wholly respectful nor disrespectful towards a religion. The equal respect to all religious faiths professed, practiced and propagated on the sovereign soil of Nepal is the hallmark of Nepali secularism. For Nepal secularism has also come to mean safeguarding of ‘dharma sanskriti’ (religion and culture) that has been in existence for generations (sanatan) as well as the freedom of religion and culture. This clause has been criticised by some.

“The new Constitution dilutes the provisions of secularism under the pretext of upholding the Sanatan Dharma, an alternative name for Hindu religion. As such, the Constitution has actually upheld the idea of Hindu state,” writes Dipendra Jha, Advocate General of Province-2, in his book. It would be worthwhile to examine the concept of secularism forwarded by Dr BR Ambedkar, the chief architect of Indian Constitution here.  “A secular state does not mean that we shall not take into consideration the religious sentiments of the people. All that a secular state means is that parliament shall not be competent to impose any particular religion upon the rest of the people,” writes Ambedkar.

Dr Chiara Letizia, a research associate at School of Anthropology and Museum Ethnography, University of Oxford, in her article “Shaping Secularism in Nepal” (2011) published in The European Bulletin of Himalayan Research argues that cow slaughter and conversion should not be outlawed in secular Nepal. She argues that there should not be laws based on Hindu norms and values and public holidays on Hindu festivals.

Researchers like her fail to understand that whatever is true for Europe may not be so for Nepal because of its unique socio-cultural set up. In Nepal, “custom” is unanimously regarded as a major source of law. If Nepal wishes to give constitutional protection to its customary practices, what’s wrong in it?

She suggests that it’s a sane to slaughter cows in secular Nepal. Secularism cannot find its strong base in cow slaughtering.

Both the constitutions of Nepal and India recognize only one type of citizenship. They have not adopted dual citizenship system.

It is a truism that constitution and law alone cannot completely eradicate systemic discrimination, oppression and poverty. Constitution, by nature, is an imperfect document. Our constitution may not be the best document of the world but it has some provisions which are more progressive than many constitutions of South Asia. We must not ignore this fact while debating our constitution.

Bodies float down Ganges as nearly 4,000 more die of COVID in India
14 hours ago

35 killed in Gaza, 3 in Israel, as violence escalates
16 hours ago