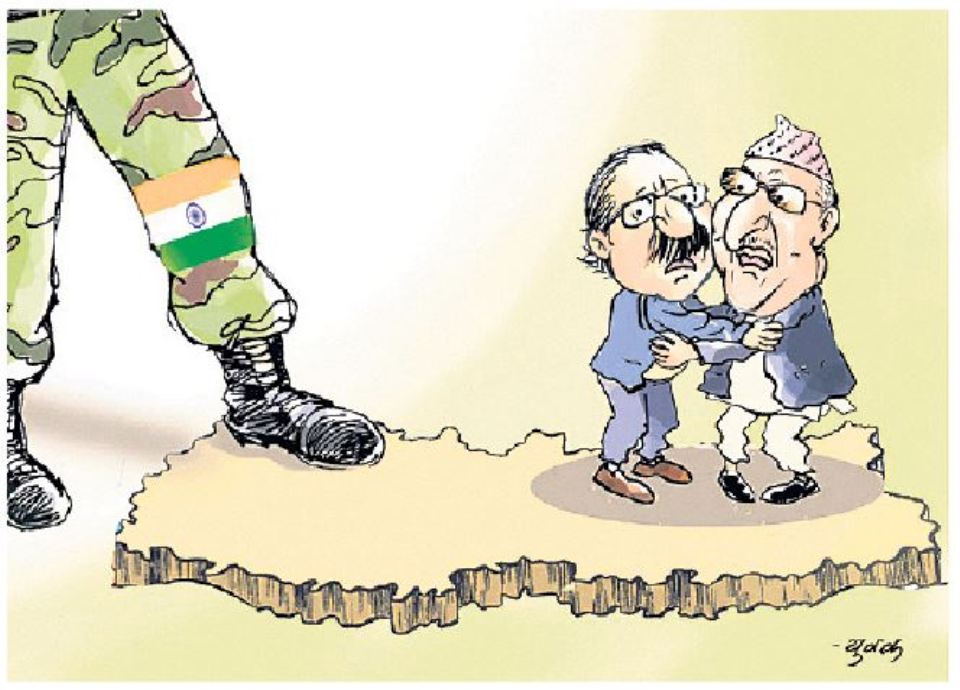 Nepal-India relations have been on the rocks because of India’s recent release of a political map in which Nepal’s territories of Kalapani area have been subsumed into Indian territory. Nepal government has already objected to this unilateral action of India as unacceptable.

The spokesperson of India’s Ministry of External Affairs issued a three-paragraph press statement in response. The press statement and the contents therein are highly misleading, full of lies and contain veiled warning, too. It smacks of Indian bureaucracy’s colonial mindset, hubris, hypocrisy and high-handedness.

In the first paragraph, the spokesperson says that their map accurately depicted sovereign territory of India and that the new map had in no manner revised their boundary with Nepal. Nepal’s territory has been shamelessly, surreptitiously and unilaterally included in the newly released political map. Yet, he has the cheek to say that no territory of Nepal was included. It is all but the height of hypocrisy.

Not a border issue

The second paragraph of his statement is completely misleading and distortion of historical facts. He tries to make us believe that Kalapani is a border issue and says that the boundary delineation exercise is ongoing and reiterates his government’s commitment to find a solution to this issue through dialogue. This is as much amusing as it is puzzling.

First, why he saw a need for a dialogue when he says with confidence that their new map has “in no way revised their boundary with Nepal?” This is clearly to assuage the surging resentment in Nepal over this highly overbearing Indian attitude. Surprisingly, he tries to create confusion by stating that Kalapani dispute is a border dispute between the two countries. This is nothing but an outright lie and far from the truth.

First and foremost, Kalapani is not a border issue between the two countries. The Sugauli Treaty, which both countries have owned up, has clearly established river Kali flowing from Limpiyadhura as the western border between the two countries. Thus, there is no border dispute in the area and the joint border delineation team has nothing to delineate there. To lump the territories of Kalapani with the other unsettled border issues along Nepal-India border, which the spokesperson’s statement tries to do, is to dishonor the Sugauli Treaty. Now, either India should say that it doesn’t honor the treaty obligation, or accept the boundary as stipulated in the treaty.

Therefore, we must be clear that Kalapani dispute is not at all about border dispute. It is a territorial dispute and about illegal occupation of our territory by India since 1962. To try to seek its solution by the joint border delineation team as if it were an outstanding border dispute is to dishonor the treaty obligation.

The third paragraph shows the true face of Indian establishment. One is at one’s wits end to read the contents of the paragraph, which contain a veiled warning that “both countries should guard against vested interests trying to create differences between our two countries.” It is clear who the warning is aimed at. It is obviously not for the Indian people who may have no reason to resent over the revised map. Clearly, the warning is intended for the Nepalis who have every reason to object to and express their anger. A democratic country, a close friend of Nepal that India is never tired of reiterating on every available occasion, unilaterally creates a problem. Then it sits in judgment and warns the aggrieved party not to make a hue and cry. Nothing can be more ironic and hypocritical than this.

How it all began

The revised political map of India can be called an open and unilateral cartographic aggression committed by the Indian government without the consent of and formal agreement with Nepal. The Indian establishment has followed the tradition handed down to them by their colonial masters. Let us go back to the history of post-Sugauli Treaty to understand how this cartographic aggression began.

The Sugauli Treaty does establish River Kali as Nepal’s western border with India. However, at least to my knowledge, it doesn’t include a counter-signed map by the two agreeing parties showing the Kali river originating from Limpiyadhura. Nor does the Treaty specifically mention the name of Limpiyadhura as the source of origin of the river Kali. These two omissions did leave much room for border manipulation and to commit cartographic aggression in later years by the British rulers in India. The wily British rulers seem to have begun unilaterally and at will to engage in border manipulation since the period after 1856, perhaps having realized the strategic importance of the Kalapani area. But one notable fact is that all the available maps, including those published by the Survey General of India between 1816 and 1856, do consistently show the river Kali originating from Limpiyadhura as the border between the two countries.

Interestingly, inconsistencies and subtle border manipulation appear to have started only after 1856 onwards. A map published in 1856 by the Survey General of British-India suddenly shifted the border from Limpiyadhura to Lipukhola, while retaining the Kali as the river flowing from Limpiyadhura. It was the first recorded unilateral cartographic aggression committed by the British. Whether it was done with or  without the knowledge of and consultation with Nepal is unknown. In subsequent years, this unilateral exercises to alter border and shifting it in stages towards east of Limpiyadhura continued in the maps of Survey General of India.

Then suddenly in the map of 1879 the river Kali flowing from Limpiyadhura was given a new name of Kutiyangti. Not only that, other maps published around the same period have named Lipukhola, hitherto remained nameless, several miles east of Limpiyadhura as Kali river. The Survey General of India’s 1879 map has moved the border further east of Lipukhola, including Kalapani. In the map, the borderline follows south along a small stream, Pankhagadh, to the south of Kalapani and moves again north along the ridge lines all the way up to Lipulekh. The Kalapani and Lipulekh passes are shown well inside the so-called Indian territory. The British rulers in India are largely to blame for creating this problem.

Kalapani is undoubtedly a very sensitive political issue from the strategic and national interest point of view. The wily British tried to move the border to Kalapani from Limpiyadhura perhaps because of its strategic location and significance. For us it symbolizes our national pride and our supreme national interest. Hence, its permanent solution must be searched through dialogue at the highest political levels on both countries. It may be prudent to conduct negotiation on stages. The first stage of negotiation should involve seeking recognition by India that the territories of Kalapani and Limpiyadhura areas irrefutably belong to Nepal as per the Treaty of Sugauli. India may not easily agree to it. It is here we must be able to bring our diplomatic prowess to bear upon India. For that we must arm ourselves with irrefutable historical evidences and maps in our negotiation with India.

The second stage of negotiation must be centered around how to get back the Indian occupied territories from the Kalapani area. Negotiations on both issues may be taxing and time-consuming. The Indian establishment may resort to all sorts of tactics to stall negotiation. But there is no retracting to be made. Since these cartographic aggressions were committed unilaterally, they can in no way change our border established by the Treaty of Sugauli.

There is already a national consensus and the whole nation stands united on this issue. The momentum generated now must be seized by the government. Perhaps Indian Prime Minister Narendra Modi has already felt a moral dilemma for having committed this cartographic aggression in utter disregard for and in contravention of the Sugauli Treaty provisions.

It is hoped he is fully aware that such acts may help fester, not foster, good friendly relations with its long-time and well-meaning next door neighbor. True to the stature and standing of India in the international community, Modi should show magnanimity of heart and political will to help resolve this dispute once and for all, in a friendly way.