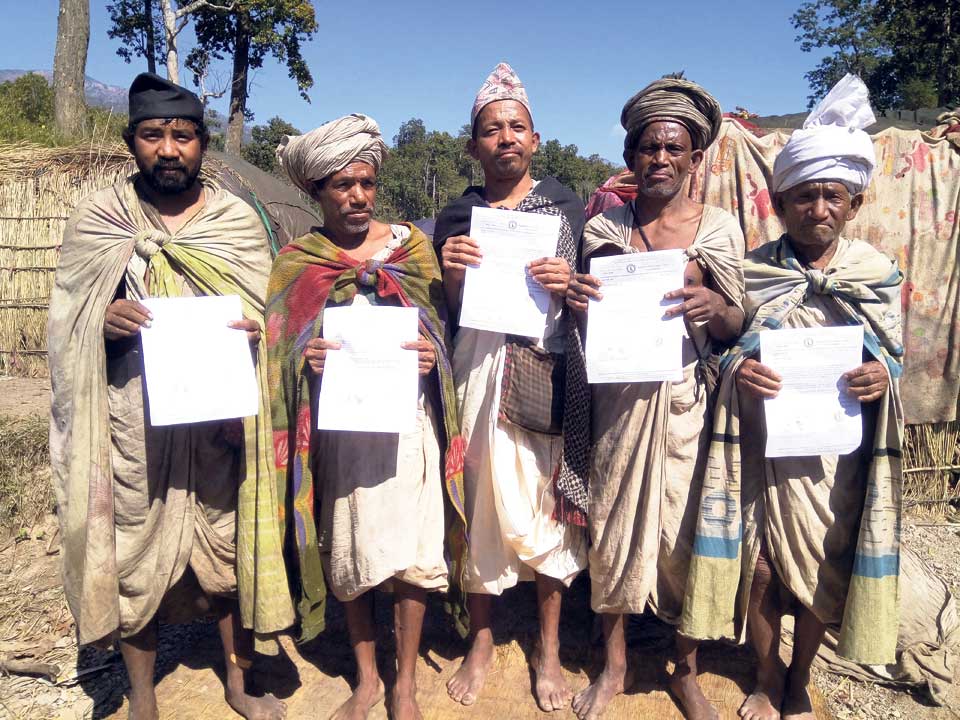 SURKHET, Feb 24: Five years ago, Shambhu Prasad Chaurasiya, the then District Forest Officer (DFO) of Surkhet reached Nalkhola Community Forest to meet Rautes, the last nomadic tribe of Nepal. When he urged the leader of the community Mahin Bahadur Shahi to start agriculture, take up jobs and send their children to school, Shahi said to him, "You become a Raute like us, we will become commoners like you."

Rautes who managed their meal by hunting and gathering never wanted to work or get educated. Going against their own principles, five people from the Raute community including former leader Mahin Bahadur started working since Saturday. People, who once refused to touch money considering it a sin, have now taken up jobs for earning money.

Currently, Rautes are living in the Lekbesi Municipality of Surkhet. Former leader of the community, Mahin Bahadur and current leaders Suryanarayan, Dil Bahadur, Bir Bahadur and youth Prakash Shahi have been appointed as the Raute social cadres for Social Service Center, (SOSEC) Dailekh. They will be provided Rs 1,500 a month.

After accepting the appointment letter Mahin Bahadur said, "As we are not allowed to cut trees in the forest. We have no option other than working to arrange two square meal for our family members," adding, "This is not a choice but an obligation for us."

Until a few years ago, people of this community earned their living by selling wooden utensils. However, they are unable to continue their ancestral profession as they have been forbidden from cutting trees.

"Now we will have a permanent source of earning, we won't have to wander places seeking donation," said leader Suryanarayan. In recent years, there has been massive change in the lifestyle of Rautes.

Surprisingly, even the children of these communities have understood the importance of education. "We might get scolded if we are found learning alphabets in our community," said young Birkha Bahadur Shahi, adding, "That is why, we come a bit far from our locality to study." SOSEC has arranged a friendly teacher for the Raute children.

The teacher Durga Khatri says the children are interested in their studies but the Raute leaders often obstruct their studies. "Raute children dream of becoming doctors and drivers but the leaders prevent them from studying saying that is something they have never done," said Khatri.

Meanwhile, Karnali Province has formulated new laws and policies for the Raute community. "With the objective of preserving the language, culture and tradition of these people, we have formulated some new policies," said Social Development Minister of the province Dal Rawal, adding, "We hope this will play a pivotal role in the promotion of Raute culture."

As per the new law, people other caste will have to seek permission before providing help or meeting the Raute people. As the people of this community have started consuming too much alcohol, the province will deploy police near their settlement soon to monitor the supply of liquor. Likewise, the province government has announced to manage mobile schools and health services at the doorsteps of these people.

Until July 15, 2018, there were altogether 151 Rautes in Nepal; however, their number has dropped to 145 in the last seven months.

Risky journey to school for lack of bridge