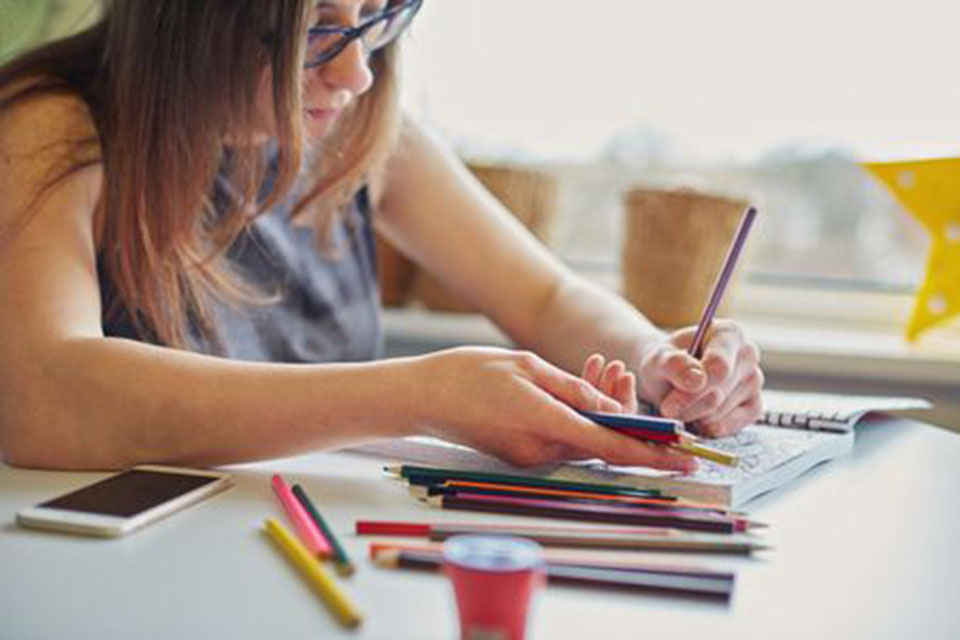 Coloring was once considered as something a child would enjoy doing. Now this activity has shifted to the world of adults

No, it’s not just due to nostalgia for good old childhood days.  It’s more complex than that and the coloring books are also more complex.   Adult coloring is more for therapeutic reasons. One of the reasons could be that it helps the elderly with maintaining their hand eye coordination. At the same time it also provides them with a purpose to do something. It is actually an excellent way to immerse themselves in a different world of colors and be happy about it too.  Apart from that, adult coloring is a way to relax a stressed mind. A 2005 study found that coloring activated parts of brain that supports creativity.

Not just exercising, coloring also leads to creative meditation. The way it works is that coloring requires focused attention outside of self–awareness. In the process of removing ourselves as focal point of our thoughts, we immerse in the current activity of coloring.  When this state is achieved, coloring becomes very much like an exercise in meditation.

Famous psychologist Carl Jung believed that coloring mandalas—an abstract geometrical form often used in many ancient cultures, such as Hinduism, Buddhism, Australian Aboriginal and Native American—helped patients experience benefits of meditation. These benefits included inner calm and self-realization. He used this practice for the promotion of wellness among his patients.  The task of coloring is focused and demands full concentration. Hence, there is no opportunity for troubling thoughts. Thus reducing negativity in people and replacing it with positive thoughts, when we react favorably with color blending, required for creative patterns.

The act of coloring requires repetition and absolute attention to details. This increases a person’s focus on the activity, rather than their worries. Neuropsychologists have noticed how coloring created real neurological effects. They noticed changes in heart rate along with changes in brainwaves too.

Beyond child’s play
Coloring was once considered as something a child would enjoy doing. The only instance of adult coloring would be teachers and sometimes parents, to teach children to color. Apart from that, adults were ashamed of being caught coloring and would feel the need to justify their action.  The same activity has now suddenly shifted to a different territory—the adults.  Yes, it is a fun way to pass time but it’s the books’ therapeutic quality that has made it a super hit in the Western world.  So when did this trend start?

In 1961, the “Executive Coloring Book” was published and it contained plenty of sardonic comments like ‘this is my suit. Color it grey or I will lose my job’, about corporate life.  The same year another adult coloring book ‘JFK Coloring Book’, supposedly authored by Caroline Kennedy who was four years old at the time, reached the top of The New York Times bestsellers list.   The popularity of coloring books of the 60s depended on counter cultural captions that appealed people of that time and not on artistic aspirations.

Now the adult coloring books emphasize more on actual coloring with therapeutic value of the elaborate designs.  The coloring books became so popular that to keep up with the global demands of coloring pencils, Faber-Castell had to add extra shifts at its Bavarian factory. The popularity of the adult coloring books to some extent might be because of the fond memories of childhood that it evokes in adults and while doing that it also helps people reduce anxiety, restlessness and also relieves their stress.

I am sure you are thinking art cannot cure a disease.  Yes, you are right, but it can make you feel better and hence, is often used as a therapy.  Similarly coloring is therapeutic, which is not the same thing as therapy. It presents a creative venture even for those who are not artists.  Different people have found different reasons to use adult coloring books.  Some have found it useful to help them concentrate in class lectures.

Therapeutic value
So why have coloring books suddenly become so appealing to the adults? It is entirely possible that people still enjoy the coloring that some might have done as a child, while for some others it is totally new and perhaps it gives a creative outlet to get away from daily routines.  Or may be it is the attraction of mindfulness that we experience during the coloring sessions as we disconnect from the chaotic world and get connected with the present activity of coloring. Whatever the cause, adult coloring is becoming extremely popular these days in the western world.

Finally, adult coloring books are of therapeutic value but they are not the same as art therapy and using an adult coloring book is not exactly the same as completing an art therapy session.  That’s because art therapy relies on the relationship between the client and the therapist.  Despite that adult coloring has plenty of benefits for those who use it. These benefits range from improving mood, to reducing mental health stress. After reading about adult coloring in such detail, I am sure you too are tempted to start coloring.  There is no need to be ashamed of.  Take the first step and download a sheet or two from the Internet and borrow your children’s coloring pencils and you are all set to start your new venture.  You never know you too might like it.  Go ahead and try it, won’t you, parents?