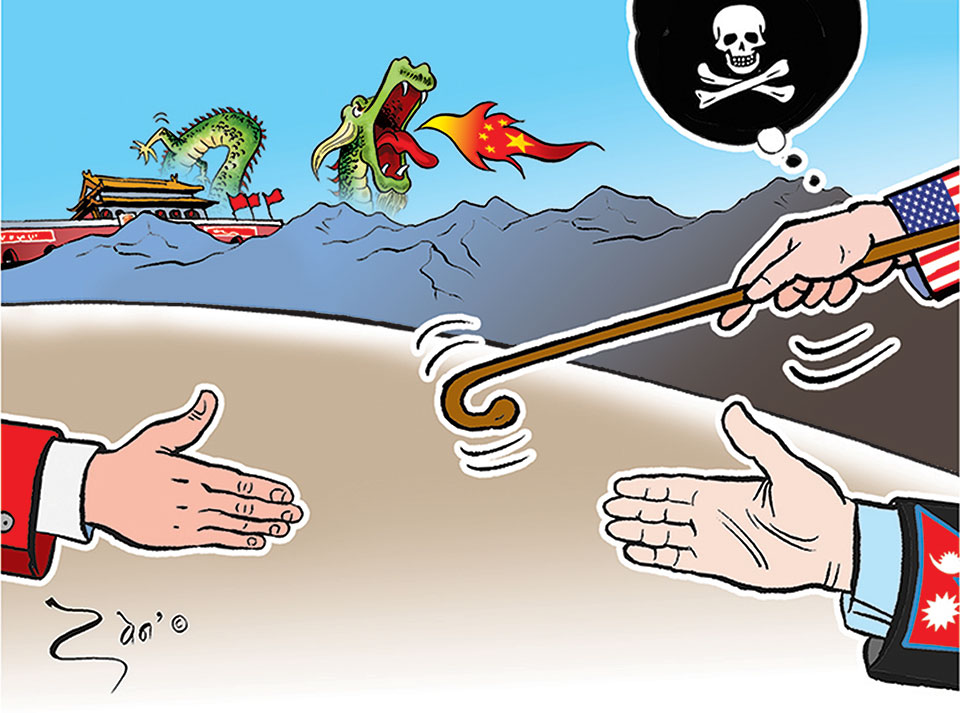 Maintaining a strategic balance between China, India and the US-led Western world remains a challenge for Nepal. But some recent events show we may be losing this balance

The Trump administration in the US has come up with the Indo-Pacific doctrine which in many ways is a restatement of Barak Obama’s pivot to Asia, known as the rebalance doctrine. Both doctrines are of the same origin and carry a shadow of the famous Thucydides trap that was popularized by Harvard Professor Graham Allison in the 1990s.

Trap doctrine
The trap doctrine states that there is a high probability of tension leading to war between a rising and an established power competing for influence and domination. As a historian Thucydides observed that Athens in the past was the established power with all its culture, wealth and military might. Sparta was another emerging nation with a strong military culture and the potential to challenge Athenian supremacy. Athenian rulers viewed Sparta’s rise with apprehension and concluded that it needs to be “shown its place” before it becomes ambitious enough to put forward a challenge. This perception led to war.

Prof Allison explores the history of war in the past five centuries and concludes that of the 16  major conflicts in the world during this period, 12 were the result of the Thucydides trap. In 12 out of 16 cases, war erupted because the existing and the emerging powers could not find an amicable model that generates trust and security between the two so that it could be a win-win situation for both. The question today is: Is history going to repeat with conflict between the established and the emerging powers again in the first quarter of the 21st century? For Nepal this question is of relevance since the US as reported in news media sees Nepal as a part of the Indo-Pacific nexus that is evolving at the moment as  an informal alliance of four nations namely Quad with  India, Australia, Japan and the US in it. It is not yet clear what this alliance aims to achieve except its vague and latent uneasiness with China’s emergence as a quasi-ideological power with new economic and military might representing both a challenge as well as an opportunity.  As an alternative to the famous “Washington Consensus” of the 1990s there is now the “Beijing consensus”   which is seen as a new approach to change and progress. However, in their dealings with China all four countries in the Quad see the challenges and the opportunities with different perspectives making it difficult to think of a common theme and response.

Containment Doctrine
During the Cold War the containment of the Soviet Union was the overriding concern of the Western world led by the US. The Soviet state was at its core anti-capitalist and represented an economy that was inefficient and not a serious participant in global economy. In essence the world was divided into two camps that were philosophically separate with different world views and limited economic interaction. In this setting the goals of the US foreign policy was the containment of the “evil empire” hoping that it would collapse under the weight of an economy that was lagging in productivity and innovation. The democratic wave of the 1990s achieved this goal and for a while American scholars saw it as the “end of ideology” and the final victory of democracy and liberalism. The 1990s was a period of one superpower directly or indirectly setting the rules of international relations with other nations relegated to the status of offering suggestions and operating at the margin.  China’s rapid rise as an economic and military superpower has indirectly challenged this scenario. Similarly India’s rise as well as the growth of many other nations in Asia as new centers of world economic growth with vast future potentials has unleashed new perceptions of national interests with strong security and economic considerations. Asia has now become important for the US and therefore the need for rebalance or the search for a new Indo-Pacific strategy.

Strategic balance
Both India and China are becoming increasingly important actors in the global balance of power.  China is a one party quasi ideological state that has shown that it is not averse to project power beyond its immediate border even if it means some risk of confrontation with the US, the established power. However, increasing economic interaction between the two countries defines a red line, however vague it may be, that both nations cannot ignore. Similarly for India which remains a vibrant democracy China remains both an opportunity as well as a threat in the horizon.  In this scenario, maintaining a strategic balance between China, India and the Western world led by the US remains a challenge for Nepal. Unfortunately the recent outbursts by the ruling communist leadership against the US indicate that we may be losing this balance to the detriment of our own national interests.

For Nepal the first task of foreign policy is the preservation of the country’s survival as an independent and hopefully a prosperous nation. Our region—South Asia—is a “conflict zone” with both the US and China as participants with differing interests. In this context we should look at the past for some insights in dealing with the present. During the Rana rule we accepted the “umbrella doctrine” and accommodated the British interests.  Given the declining power of China on the north this was probably a wise strategy to retain our status as an independent nation.  However, during the last 70 years both consciousness of Nepali people and the power balance in the region have undergone a sea change. We have a rising world power in the north and an aspiring world power in the south interacting with an established super power that does not seem to be sure about the role it wants to play in the evolving world order. It is a period of transition that is dismissive of some elements of the present international order while being unable to present an alternative vision.  The ensuing confusion holds potential for international turbulence where small countries like Nepal can easily be caught in a triangular configuration.

The key to Nepal’s survival and prosperity is a high level diplomatic skill based on the concept of strategic balance. It demands that we develop the vision and capability to project ourselves as a trustworthy nation  that remains sensitive to the concerns of both our mighty neighbors in the north and the south as well as  the Western world led so far by the US, while remaining aware of our core national interests. This will require careful balancing between short term and long term goals so as to maintain equilibrium in our foreign relations. In this context the recent flip-flop in foreign policy and the use of language that is reminiscent of the Cold War era is regrettable. Adventurism, whether in words or actions, can raise the risk beyond our capability to manage thus threatening the balance that we should maintain.

The, former foreign minister, is the President of National Democratic Party (United)

The US cannot decouple its economy completely from China without enormous costs. ... Read More...