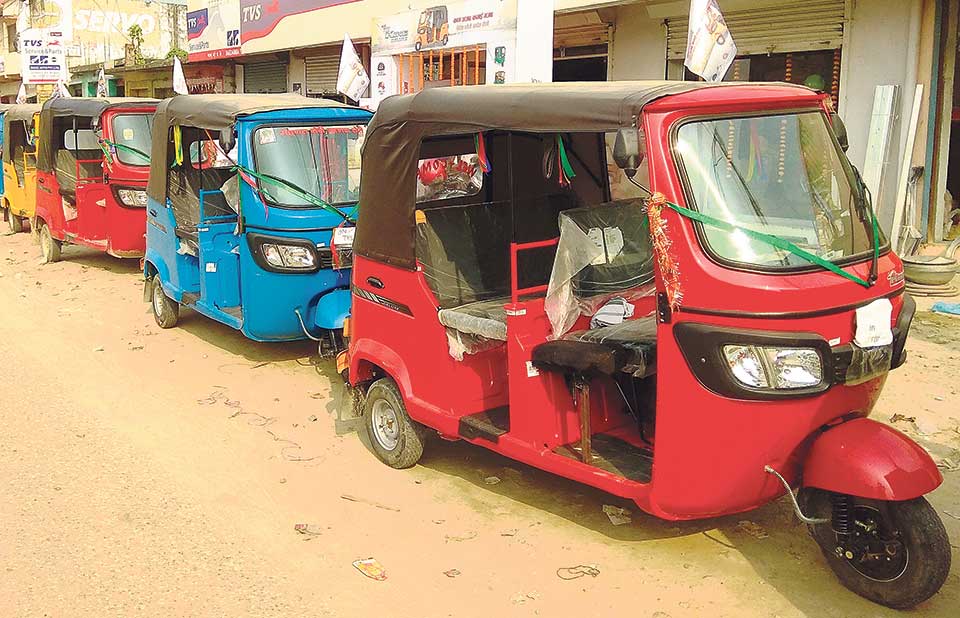 BIRGUNJ, Jan 27: Along with increase in import of vehicles set to hit the road as public vehicles, the import of small vehicles such as three-wheeler auto-rickshaws has also increased. The first half of the Fiscal Year 2017/18 saw import of more than 5,000 auto-rickshaws, which is nearly twice the volume of import compared to FY2016/17.

According to statistics maintained by the Birgunj Costumes Office, only 2,637 auto-rickshaws were imported by mid-January last year, while this number has soared up to 5,060 this year. With the expansion of road networks, vehicles have got access to various corners of the country, whereas the case last year was different. It has resulted in the surge of auto-rickshaw import in the country. The vehicles entering the country through Birgunj have made their way to other districts of tarai and the hilly regions as well.
“The import of three-wheelers has seen significant rise this year. The taxes involving import of these vehicles include 30 percent customs duty, 55 percent excise duty and additional 13 percent Value Added Tax (VAT) adding up to 98 percent revenue in the import of three wheelers,” said Sebanta Pokhrel, chief of Birgunj Costumes Office. The demand for auto-rickshaw in the Nepali market has increased, therefore the import of these vehicles have taken a leap this year, added Pokhrel. This surge in import has contributed to 167 million worth of revenue in the first half of the fiscal year.

After adding up the revenues associated with the import of auto-rickshaws, each vehicle’s cost sums up to Rs 300,000 which, while hitting the showrooms goes up to about Rs 350,000. The Nepali market features a wide range of three wheelers costing as much as Rs 550,000. “The auto-rickshaws sold in the Nepali market are seldom purchased for personal use; in fact these vehicles are used as means of public transport and provide people with employment opportunities,” said Binaya Yadav, of Shanti Motors. “As public transportation service helps change the economic activities of people, banks are not hesitant toward investing in this field. With the bank accepting clearance in monthly or daily installments, the demand for these vehicles has increased.

Nepali roads have an abundance of three-wheelers from half a dozen auto-rickshaw companies, and the number is increasing by the day.

Sharp fall in imports thru Birgunj in FY2015/16

BIRGUNJ, Dec 12: Import of mobile phones has jumped by more than five times via the Birgunj customs point. ... Read More...