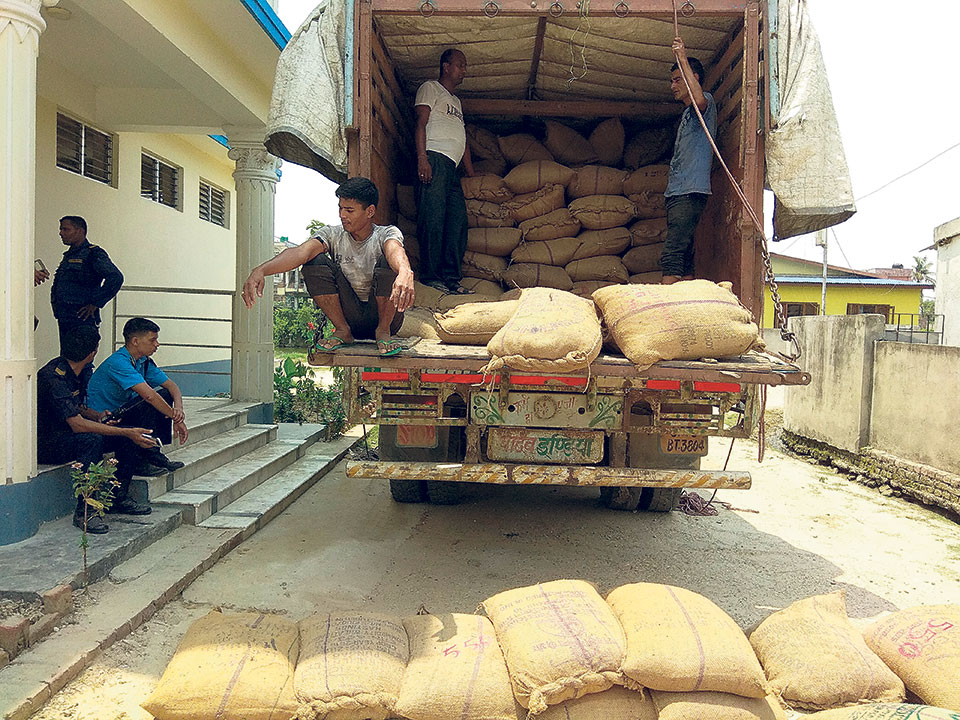 This truck was impounded by security forces near no man’s land in June after it was found carrying black pepper by showing documents of leather goods at the customs office. Photo: Republica Files

According to the office, 12,264 tons of black pepper was imported via Birgunj Customs Office and Sirsiya Dry Port Customs Office in the review year compared to mere 1,867 tons in FY2016/17. Officials at the customs office say that the rise in black pepper imports by a whopping 656.47 percent year-on-year is ‘unbelievable’.

Such a high import growth implies that smuggling of this spice is on the rise. Though police have seized trucks carrying black peppers imported illegally and arrested petty smugglers time and again, detailed investigation against the smuggling racket has not been launched yet.

Earlier in June, security forces impounded a truck with Indian registration, which was carrying 12.2 tons of black pepper, near the Nepal-India border point after it had completed all customs procedures. Traders say that smugglers could take the truck all the way to the Nepal-India border point after getting green signals from the Indian customs officials.

The Pathlaiya based mid-regional office of Department of Revenue Investigation has launched an investigation into the case.

“Everybody knows who are involved in smuggling of black pepper. But nobody is going to take action against them,” a security official in Birgunj claimed, seeking anonymity.

Traders say illegal trade of black pepper started about three years ago and the modus operandi of this trade is similar to betel nuts.

About three years ago, smuggling of betel nuts has worried officials of both Nepal and India. Nepali traders would import betel nuts from third countries and export them to India as a Nepali product. Like black pepper, India has also banned betel nuts import.

As the import figure of black pepper is way high compared to the domestic demand, it is clear that the overwhelming rise in black pepper import into Nepal is related to smuggling.

BIRGUNJ, Jan 27: Along with increase in import of vehicles set to hit the road as public vehicles, the import of... Read More...