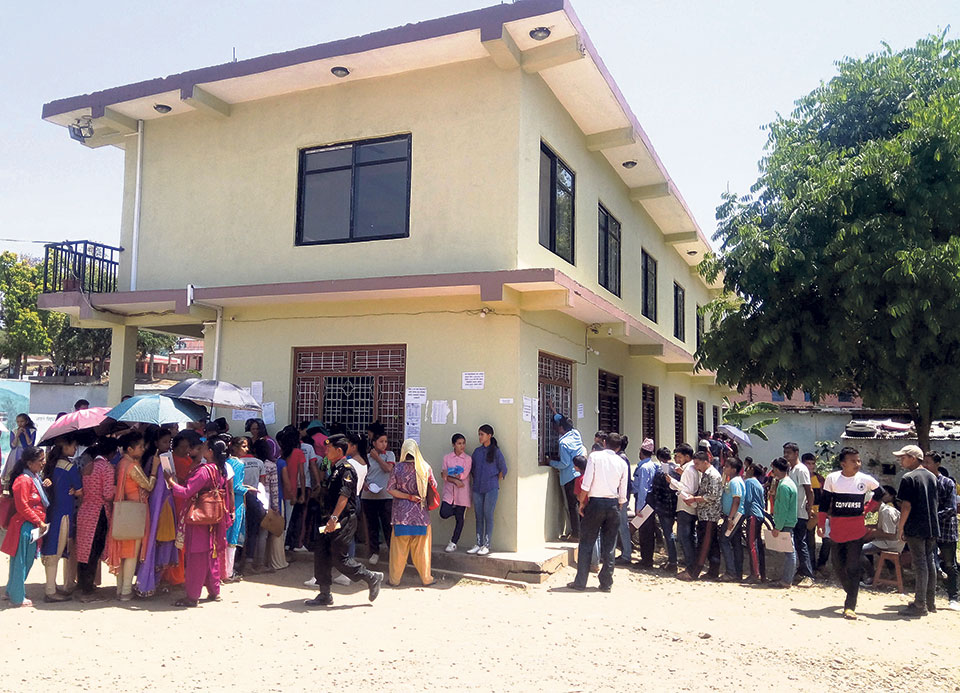 SURKHET, May 20: Liladhar Chapai of Gurvakot Municipality had decided that his children would attend private school even before they were born. Despite being a teacher at a community school, he had no faith in the quality of the education provided by community schools. However, this year he admitted his daughter to Jana Secondary School, a community school, in 9th grade.

Dhaneshwor Upadhyay, also of Gurvakot Municipality, admitted his son in 6th grade at the same school. Upadhyay’s son and Chapai’s daughter both were studying at a renowned private school earlier.

According to Upadhyay, community schools are far better for children since there are a lot more things to learn there. When educational quality is no more a problem, every parent should opt for sending their children to a community school, he argues.

“I had sent my child to one of the best considered private schools here. Since childhood, I was very concerned about the quality of education they will receive. Schools shape the personality and character of a child. So as parents we must be very wise in choosing a school for them,” Upadhaya said.

He had sent his son to a Montessori based school in the beginning. The fee was hefty, yet he never compromised. Then he shifted the boy to a renowned private school where he studied till fifth grade. This year, he was admitted to a community school.

“I checked the environment of the school before admitting him. It was just great. I was assured that no private school around here could match its education standards,” said Upadhyaya in praise of the school.

Sandip Khatri who studied at a private school in Birendranagar till last year has now joined Shree Sanskrit Secondary School as a 9th grader. The school offers education both in English and Nepali mediums. Khatri is happy to have joined this school.

This academic year, Jana Secondary School had announced admissions for 434 seats from 1 to 9th grade. It conducted an entrance exam for selecting the students from among the 1,707 applications it had received.

According to parents, Dhakal is right. So much so that admission in some community schools necessities ‘source – force’. Even such influences are failing in some schools. Requesting anonymity, father of a sixth grader stated that his political power did not work. “I wanted to admit my son to a community school which has been doing pretty good these days, but he was not selected. I tried to use political influence, but that also did not help.”

According to Dhakal, the school is getting popular due to its child-friendly environment, trained teachers and infrastructures. “We have given priority to modern techniques of teaching and learning. We take care of children’s physical and mental health. We believe that we are doing better than many private schools here,” he said.

According to Bhupendra BC, Vice Principal of Namuna Secondary School of Surkhet, the changing scenario regarding community school is very encouraging. “Earlier, students rejected by private schools would come to community schools. Now, those who are not accepted by community schools are going to private ones. Things are changing,” he said.

Yama Lal Ghimire, principal of the Shree Sanskrit Secondary School, noted that his school is receiving a growing number of students from private school every new year. “Our capacity is not that much. We need to expand now,” he said. He added that the environment at community schools is peaceful and humble compared to private schools.

DHADING, July 1: Most of the private schools in the country, basically those affluent ones, have run digital classes amid... Read More...

GORKHA, April 14: Although article 31 of Nepal’s constitution states that every citizen shall have the right to get free... Read More...

In defense of private schools

Why can’t an entrepreneur open a private school and make profit in the process? Why don’t we let the market... Read More...