Are we a peaceful nation?

This is a sequel to my earlier piece “Are we a happy nation?” (July 3, Republica). There must be relations between peace and happiness. A peaceful country must be happy and a happy country must be peaceful.

Boasting of Lumbini—the the birth place of Lord Buddha, an apostle of peace—has almost become our national pastime. We love to project ourselves as a peace-loving nation. Even Panchsheel (the five principles of peaceful co-existence) is bedrock of our foreign policy.  Our blood just boils when somebody claims Buddha was born in some other place, not in Nepal. This must have to do with our other culture—of Gurkha bravery and Nepali khukuri—than an innate desire for peace. But for sure, everybody knows that when Siddartha Gautama was born, neither there was a country called Nepal nor India. Keeping aside this polemic debate, let us focus on the question: Is Nepal a peaceful country?

Since 2007, the Institute of Economics and Peace (IEP), based in Sydney, Australia has been annually publishing Global Peace Index (GPI) that measures peace and harmony of the countries, on a scale ranging from one (peaceful country) to five (less peaceful or violent country). A country scoring less is peaceful country compared to the one scoring higher. Higher scores imply worsening of peacefulness and vice versa. In June, the IEP released its Global Peace Index 2019 for 163 independent states and territories.

Peace is notoriously difficult to define. It may be defined as a state of tranquility and harmony, an opposite of war, conflict and violence. However, this is only one measure of peace, called negative peace or an absence of violence. The Global Peace Index (GPI) is meant to capture negative peace. There is another index called Positive Peace Index (PPI), also scaled from 1-5, which goes beyond negative peace and measures resilience of a society “to absorb and recover from shocks and it can also be used to measure fragility and help to predict the likelihood of conflict, interpersonal violence, and social instability.”

The concepts of negative and positive peace are similar to the concepts of health in medical science. A person may not be sick. There may not be any signs of disease in the body (negative peace) yet we cannot claim the person to be healthy (positive peace). To be healthy, a person must have an appropriate diet, enough physical exercises and appropriate mental dispositions. Therefore, positive peace speaks of attitudes, institutions and structures that create and sustain peaceful societies. Negative Peace complements Positive Peace.  Sustainable peace calls for active presence of both negative and positive peace. However, peace index is not without criticism. Prof Johan Galtung from Transcend Peace University, Norway, called it charlatanism and labeled PPI as Positive Business Index in view of its tilt toward business.

The GPI as a measure of negative peace is composed of three broad components, namely, the extent of domestic and international conflicts, social safety and security and militarization (level of military build-up and access to weapons and its level of peacefulness, both domestically and internationally). These three components are further divided into 23 sub-components.

Similarly, the Positive Peace Index (PPI) consists of eight factors, namely, sound business environment, well-functioning government, equitable distribution of resources, free flow of information, good relations with neighbors, high level of human capital, acceptance of the rights of the others and low level of corruption. The readers interested in methodological details may refer to the website www.economicsandpeace.org

The chart presents Nepal’s status on GPI from 2009-2019, PPI from 2013-2018 and peace surplus and deficit. In 2009, with a GPI score of 1.94, Nepal was ranked at 77th position among the list of 144 countries. In 2019, with a score of 2.00, Nepal is ranked at 78th position among 163 countries. There is a slight worsening of negative peace. However, over the last ten years, there are not much perceptible changes. Gradual increases (worsening) and decreases (improving) can be observed in GPI scores. We had worst GPI score in 2011 and best in 2015. The April Earthquake of 2015 may have robbed our happiness (refer to my previous column) but not our peacefulness. During a situation of national crisis we remained resilient. However, it got disturbed in 2016 and 2017 with the eruption of violence during Tarai-Madhes agitations and unofficial blockade. In terms of negative peace, I would say, by and large, Nepal is still a peaceful country. What about positive peace?

GPI and PPI scores are often compared to find out whether a country is in peace deficit or peace surplus. Clearly, our case is that of peace deficit. This comes as a sad message for a country boasting “Buddha was born in Nepal”.

The Global Peace Index reports provide loads of information. One such important information is the economic cost of peace, that is, the amount of money the country is losing because of violence. In 2014, the per capita economic burden for Nepal was $35 and this increased to $166 in 2016 and fell down to $142 in 2019. For a country with per capita annual income of around $1000, losing $142 per head or 14.2 percent of the income due to conflict and violence is definitely a big price to pay. Imagine the money we can save simply by remaining a peaceful country?

The decomposition of GPI and PPI provides some interesting insights into factors helping or hindering to maintain peace in Nepal. With regards to GPI (negative peace), the prime suspect is social safety and security followed by growing militarization. Growing militarization is a thing to worry about. Are our politicians aware of this? On-going domestic and international conflict has literally remained constant from 2014 to 2019. We have no international conflicts.

Reading PPI (positive peace), peace spoilers included worsening corruption situation and our relations with the neighbor. In a separate report on peace and corruption, the IEP writes, “a country cannot reduce corruption by being peaceful but it can be peaceful by reducing corruption”. No need to speak much about reducing corruption, but relations with our neighbor is definitely a thing to worry. Well, the data is for 2018. Peace and happiness are definitely correlated but correlation does not speak about causation. Reading Nepal’s happiness index along with negative and positive peace indices, I would say Nepal to be a happy country because we do not have violence (negative peace) but at the same time we are sad country because we fall behind in positive peace. 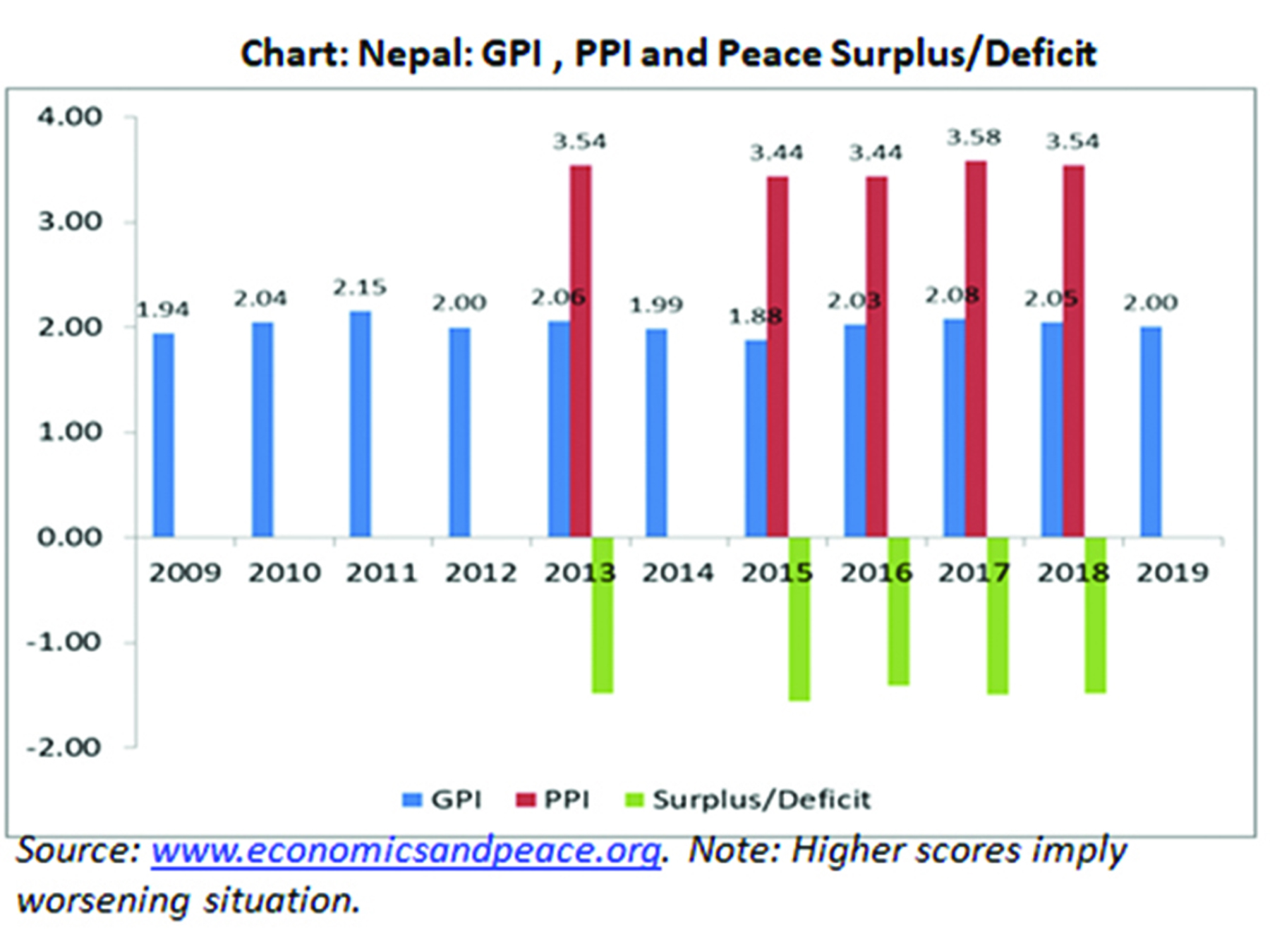