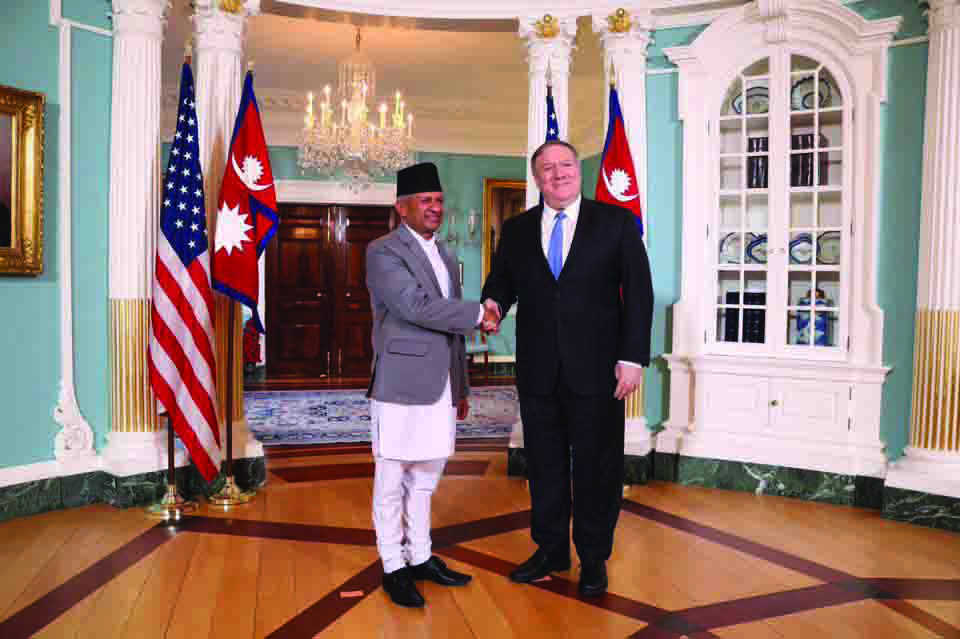 Diplomacy and development have been conducted in an ad hoc manner based more on sporadic “big dream talks” than a clear framework, vision and time-bound actions

Development and diplomacy should have moved toward a “paradigm shift” in Nepal with the new constitution and a stable national government with an overwhelming majority in power for almost a year. There are seven provincial and 753 local governments for added institutional support to bring diplomatic, developmental and democratic agenda closer to institutionalization. Given the democratic change, decentralized power and rising expectation of people to gain concrete delivery from the three levels of government, interest to support Nepal and invest in our people-friendly development plan has risen in international community. But it requires sound diplomacy and enhanced engagement with multilateral and bilateral partners for better implementation of programs and projects.

Soon after assuming office and before heading to India for an official visit, Prime Minister KP Oli had stressed that the new foreign policy motto would be ‘amity with all, and enmity with none’ while addressing diplomats and development partners in Kathmandu in March, 2018. “Inclusive democratic state” focused on advancing “socio-economic development” will remain our two “intrinsic diplomatic goals”, he had said. He had euphorically stressed that Nepal enjoys cordial and friendly relations with India and China and “independent foreign policy and balanced conduct of relations will be the hallmarks of our external engagements.”

Minister of Foreign Affairs Pradip Gyawali was of the view that “Nepal’s foreign policy engagements will be commensurate with new domestic priorities as well as our international commitments”.

What are the clear domestic development priorities of the government? Where is the clear framework and minimum consensus-based foreign policy? How are the internal and external resources mobilized and utilized to meet those priorities? While some progress is visible and it may be too early to completely fault the government now, the general impression is that the government has neither set the diplomatic and developmental priorities clearly nor has it been able to spend the capital budget effectively. Diplomacy and development have been conducted in an ad hoc manner based more on sporadic “big dream talks” than a clear framework, vision and time-bound actions.

Consider Nepal’s relation with China and India under Oli’s administration. Wrongly or rightly, a broad Indian intelligentsia and government outfit considers Oli “pro-China in his policies and approach”. New Delhi is eager to retain its influence and relevance in Nepal. The dominant view is respect the “democratic mandate,” don’t alienate popular opinion and wait and watch Oli’s moves. Prachanda being largely “unreliable”, NC having badly bungled in polls and the Madhesi parties being fractured and “geographically limited” what options are there for now?

Interestingly, the year-end review of Indian government’s policies has reportedly assessed the “restoration of relations with China” and a “balance” in ties with its neighbors, including Nepal, as positive outcomes of its foreign policy in year 2018. Nepal and India have recently agreed on energy banking for supplying electricity to India during the wet season when domestic supply is high and buying during the dry winter when internal generation is short to meet the demand. Possibility of exporting electricity to Bangladesh using Indian transmission line and attracting investment in hydro-power from Bangladesh appears to be progressing. However, implementation of the big projects such as Pancheswar is still languishing. While Nepal-China relations seem to be going fine, implementation of BRI and transit agreements has been sluggish. The long awaited and much-talked about Nepal visit by Chinese President Xi Jinping is yet to take place.

Foreign Minister Pradeep Gyawali undertook an official visit to Japan in November, 2018. The press release by Ministry of Foreign Affairs on November 19 stated that Japanese foreign minister Taro Kono “assured of the Japanese government’s full support on realizing the goals of “Prosperous Nepal, Happy Nepali” including in the sectors of infrastructure development and connectivity, poverty reduction, development of agriculture, transfer of technology, climate change and disaster mitigation”.  However, the concrete outcome was only the exchange of note for grant of 350 million Yen for carrying out the “food assistance program in Nepal”.

Additionally, Japan has included Nepal as one of the Asian nations to import labor. Nepal is drafting MoU to discuss with the Japanese Foreign Minister during his Kathmandu visit on January 9. However, experts are concerned about its viability and sustainability. Obviously, severe labor shortages and booming economy is reflected in 160 jobs available for every 100 looking for it. But 55 percent of Japanese are opposed to the new law enacted to bring more foreign workers, according to the Mainichi newspaper’s December 17 poll.

On the US-Nepal front, the US Secretary of State Colin Powell had visited Nepal in January 2002. King Birendra visited the US in December 1983 and the then Prime Minister Sher Bahadur Deuba in May 2002. After 16 years, a high level meeting between Foreign Minister Pradeep Gyawali and the US Secretary of State Michael R Pompeo took place in Washington on December 18, 2018. Pompeo highlighted the enduring strength of the US-Nepal partnership and the close people-to-people ties that form the foundation of the relationship. The two leaders are said to have discussed Nepal’s $500 million Millennium Challenge Corporation compact, “Nepal’s central role in a free, open, and prosperous Indo-Pacific” and global issues, including North Korea, according to the US sources.

However, Nepal clarified that a broad gamut of issues were discussed to “widen and deepen” 70 years of partnership and lift the relationship to the next level. But Nepal “did not commit” to the Indo-Pacific strategy.  Eyebrows were raised widely till the clarification followed as the Indo-Pacific Strategy is aimed at countering China. Clearly, Nepal’s welfare lies in not antagonizing China, including in BRI. Under the Indo-Pacific Strategy US aims to engage India, Japan and Australia in curbing China in Indo-Pacific region. For linking “Indian Ocean” with “Pacific Ocean”, Southeast Asia cannot be bypassed. Consequently, South East Asian nations, particularly Indonesia and Singapore, are part of the Strategy. Reportedly, India is in no mood to unduly confront China given its multifaceted and thawing relations since Doklam standoff.

Global instability is widely predicted to be the key characteristic of 2019, including for Asia, given China’s touchy relations with the US, potential swing in global trade and elections in Australia, India, Indonesia and Thailand. This will have an impact on Nepal as well.

An effective and consensus-based foreign policy focused on economic diplomacy that profitably balances India and China, labor importing Gulf States, Malaysia and Korea and global players like the US, Japan, UK and EU should be Nepal’s priority at the moment.