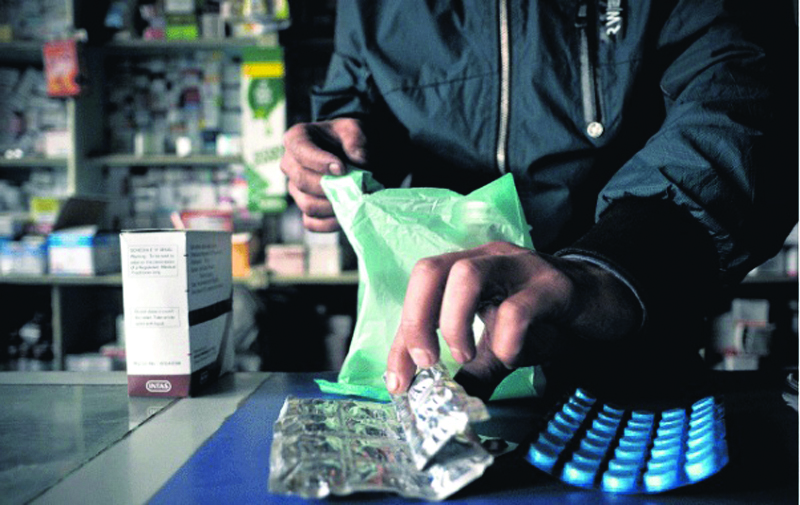 Nepal relies on India to fulfill its medicine requirement. Overreliance on foreign suppliers for vital medicines could be disastrous for Nepal in case of national health crisis

Nepalis, who have experienced snail-paced industrial growth for years, may be surprised to know that drugs are being manufactured in Nepal for over 50 years now. Chemidrug Industries Pvt Ltd is the first manufacturer of drug products in Nepal which began its operation in 1970. Then National Health Policy was promulgated in 1991 which envisaged increment in domestic production of essential drugs. National Drug Policy (1995) further stressed on the need to prioritize making Nepal self-reliant in production of drugs.

With political stability and the government’s commitment to follow the objectives of National Drug Policy, many pharmaceutical manufacturers are entering the drug sector. It can be said this is a gesture of goodwill but it is also because drug manufacturing is regarded as a rewarding business.

There are 78 pharmaceutical industries in Nepal, including the sole state-run Nepal Drug Limited under Department of Drug Administration (DDA). However, Nepal has yet to attain 50 percent sustenance. Nepal relies mainly on India to fulfill its remaining half of medicine requirement. In case of public health emergencies, the foreign suppliers may not be as responsive as local manufacturers to supply huge quantities of required medicines. So over reliance on them could be disastrous in case of national health crisis. We have faced such situation in the past.

On the aftermath of the gigantic earthquake that sank Nepal into the disaster in 2015, Nepal was in serious need of medicines. But it coincided with the unofficial trade embargo by India which lasted for months halting regular medicine supplies to Nepal. Without the domestic pharmaceutical industries, things could have turned much worse. Attaining self-sustenance in medicines is, therefore, imperative.

India is one of the largest suppliers of generic medicines to the countries like the US and the UK which are famous for unerring regulatory provisions. Nepal can take up India’s pharmaceutical development route to strive for pharmaceutical security.

In the decade between 1950s and 1960s, multinational companies entered India. They acquired drug molecules (APIs: active pharmaceutical ingredients) from overseas and formulated them locally for higher profitability—thanks to the lower labor costs. Having known this, Indian entrepreneurs themselves started their own pharmaceutical business and served the country in lower profit margins. That helped India combat the higher medicine prices set by multinational pharmaceutical companies.

After taking a stronghold on pharmaceutical finished products business, India turned its attention toward attaining sustenance in APIs. To do so, India, between 1970s and 1990s, mandated drug manufacturers to also get engaged in APIs manufacturing. Thus followed surge in APIs manufacturing but since APIs production yields low profit margin they turned their attention to China to procure APIs in lower cost.

This has now left India with dependence on China for supply of about a whopping 70 percent of APIs they need. Yet India is reluctant to become completely reliant on China as a cautionary measure against any escalation of tension between the giant nations in future.

India is thoughtful that its import of APIs was cut during 2008 Summer Olympics. That had raised the concerns about single-country reliance. While the race to attain self-sustenance in medicines goes on for now in Nepal, attaining self-sustenance in APIs can be viewed differently. Production of APIs comes up with challenges such as huge investment requirement for equipment, controlling tons of hazardous wastes among others.

Since Nepal’s rich neighbors, China and India, have long since monopolized the global market for the cheaper APIs and they supply APIs throughout the world, it is not worth trying to achieve self-sustenance in APIs production for Nepal. As of now, Nepal imports majority of raw materials from India. Breaking the shackles of single country reliance, Nepal should diversity its raw materials vendors and China comes as a suitable alternative as Nepal has recently signed a protocol to operationalize Transit and Transport Agreement of 2016.  Proposed railway connection with China can help Nepal’s quest for alternative vendors.

Indian government has set out plans to increase the competitiveness of domestic pharmaceutical industries. Special Economic Zone (SEZ) development is high on the agenda, where the geographical proximity of companies is levered to collaborate while competing in areas of test facilities, training centers, research and development facilities, effluent treatment plant and logistic centers. In Nepal’s drive to sustenance in quality pharmaceutical products with growth of domestic industries, the government can contemplate these options too.

A couple of months ago, DDA recommended Ministry of Health and Population to levy import ban on 30 kinds of drugs as Nepali manufacturers committed to fulfill the market demand within the country. The cabinet endorsement of the proposal will only help Nepali manufacturers to prosper in line with government’s policy. However, DDA needs to ensure quality and safety and ensure that efficacy is not compromised.

The government set customs tariff of solitary one percent in importation of pharmaceutical raw materials and equipment. This can help domestic pharmaceutical industries. As Nepali manufacturers are flexing their muscles to claim the market share in totality, all of them are reliant mostly on India for supply of majority of raw materials and machineries. There are arguments among the pharmaceutical fraternity that Nepal cannot be considered self-reliant in medicines with all the materials imported from third country. But think of significant job opportunities that booming pharmaceutical industry development will create and think of the research works these industries will carry out to excel in the markets.

No matter how much we glorify role of ICT in improving education, it cannot happen without larger participation of teachers Read More...