An artist’s dedication to revive the art of lithography 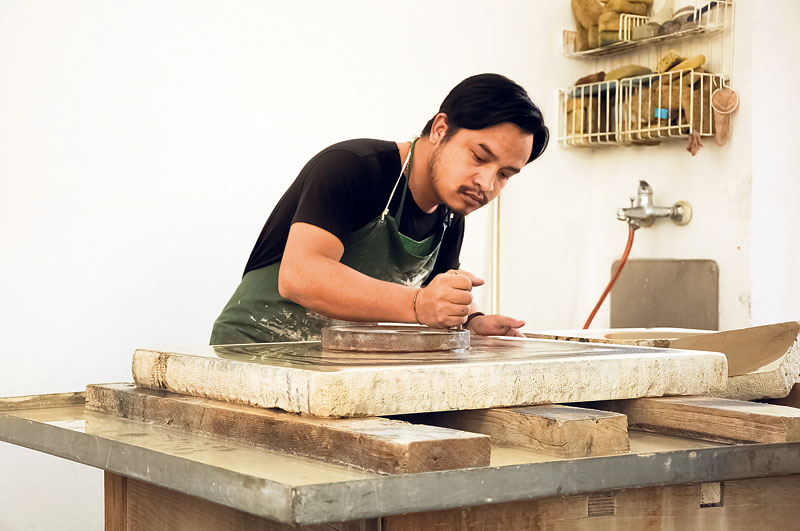 In 2010, Lama found himself in Tokyo, knocking on the doors of every art school in sight. He nervously pushed his portfolio of paintings to admission committee’s people, hoping to get accepted in any graduate level fine arts program. Many were impressed by his paintings but his lack of Japanese language proficiency singled him out. He went through one rejection after the other.

He had come from Nepal with high hopes. Freshly out of Kathmandu University’s fine arts program, he had received acclaim for his solo exhibition on Buddhist monks called ‘Transcendental Vibrations’. He had gone on to sell almost all of his fifteen paintings in that show. However, here he was, teaching himself Japanese and making ends meet doing odd jobs. The rejections pushed him away from art for nearly a year but he didn’t let his frustrations sedate his ambitions. So whatever money he would save, he would spend it on train rides that would take him to various art galleries and museums all over Tokyo.

On one such outing, a Japanese art professor was impressed by this curious looking Nepali artist. He referred Lama to his fellow professor in Tokyo’s Meisei University. But the only option available to Lama at Meisei’s department of design was to enroll in the lithography printing class. “Until then, I was only making oil and acrylic paintings. I had this vague memory of studying introductory litho printing in my bachelors,” he recalls.

It is said that lithography was started as early as 1796 in Germany. In this technique, printers would directly draw or paint on a heavy slab of limestone (lithos means stones in Greek). Before paper is placed on top of the slab’s image, big rollers are used to level the design and spread chemicals to color it. Then finally a press machine is used to apply appropriate pressure so that the image is perfectly printed on the paper.

Lama was caught in a big dilemma. He had seen litho printed works before but the technique was too complicated and overwhelming to his senses. He was also aware that this medium was a dying art form. Forget Nepal, there were only a handful of litho artists left in the world. He had to start from scratch but he was too psyched to let this opportunity go out of his hand.

He took up the program because he had no other options but as soon as he touched the limestone slab for the first time, he experienced a strange energy radiating from it. “From then on, I never felt I should give up on litho printing. Though my first few prints were entirely black, I kept on researching and adding up my technical abilities,” he says.

Now it is 2016 and Lama has mounted fifteen of his fully fledged litho prints in his series called ‘Fragments’ at the Siddhartha Art Gallery in Baber Mahal. The show, which is the very first litho print exhibition by a Nepali artist, is an outcome of his litho printing residency in Germany and China. The prints, influenced from a spattered style of Japanese calligraphy, gravitate as Lama’s tribute to the 2015 Nepal Earthquake.

The chaotic imagery of his prints is blotched by his explosive execution of monochromatic color. One recurring motif in his prints is the appearance of broken off religious sculptures. He aligns ‘shivalingas’, ‘garuds’ and ‘nandis’ to form a collage like mingle of religious artifacts. “When I think of the earthquake, the first image that comes to my mind is the destruction of our heritage sites. In a matter of few seconds, our most cherished architectural sites were reduced to rubble. As an artist you know how much effort goes in making art,” he says. He had documented photographs of the damaged sculptures and drawn sketches of them. Those images are what you see in his prints.

Many onlookers will feel that Lama’s prints deviate towards a dark milieu, the medium of lithography imposes such stark bareness but Lama tells us that there are rays of hopes behind the dark clouds. And you will notice that Lama names most of his piece with an optimistic air, some of which are called ‘Beauty Unveiled’ and ‘Hope in Havoc’.
In the past year, we have seen many artists dealing with the subject of disaster in their work. Lama is no exception. But he thinks that there’s a difference between artists simply following a trend and artists self-questioning themselves in their work.

“Disaster is highly romanticized nowadays. Artists are parodying events to fit their work but I believe disaster is not a joke. To me it’s more like pouring the fear I went through during that time,” he says. For Lama, this is the second time he has chosen the subject of natural disaster. In 2014 he had a show ‘From Tokyo to Kathmandu’ where he presented prints made from woodblock that depicted his traumatic experiences during the tsunami and earthquake in Japan.

It’s hard to survive as a lithography print artist. Artists like Lama are still working hard to setup a proper litho studio and add to that the trouble of finding litho printmaking materials like limestone slabs and chemicals. But Lama is determined to stay true his craft. “For now the future of lithography printing looks grim. However, I see art students gaining interest in this medium. I will never desert this form because a manual print that I make after going through so much physical pain is more valuable to me than a print that gets sputtered out from a digital printer.”

KATHMANDU, April 11: Celebrated Nepali artists will be exhibiting their paintings in an exhibition, “Ages of Paintings Mini-Large” at Music... Read More...