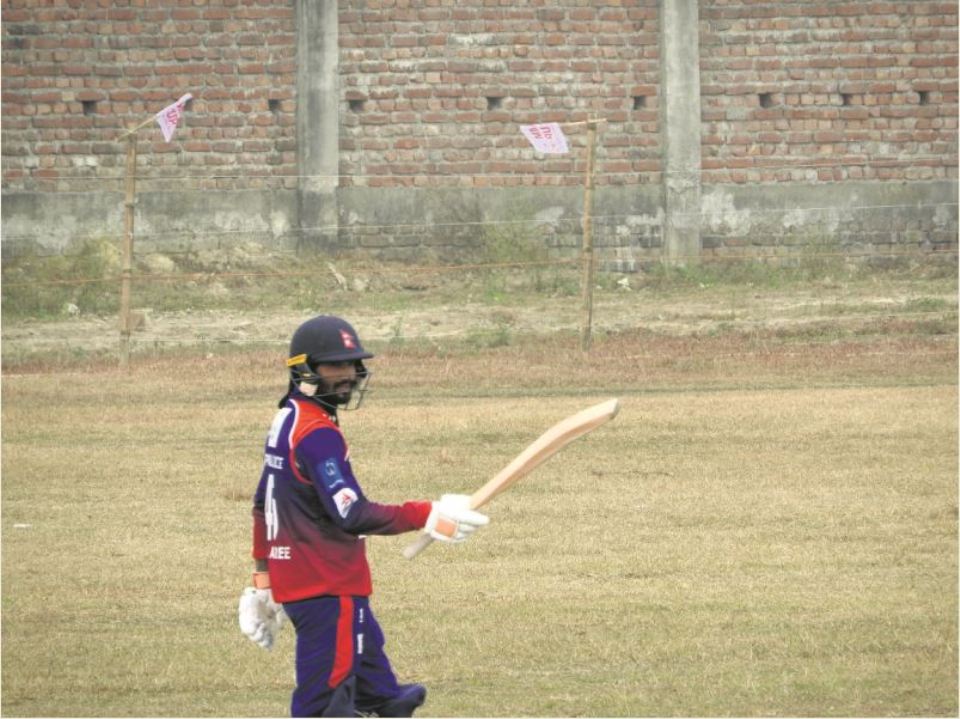 In the final Group B match played in Inaruwa Cricket Ground, Police Club struggled its way to 183 losing all its wicket in 48.1 overs before bundling out Province 2 for paltry 137 in 42.2 overs to seal the semifinal berth as group winners.

Bishal Sushling, who registered a century in the first edition of the tournament last year, followed up his second edition with a valiant 80 runs off 112 deliveries which included eight boundaries and five sixes. Coming in to bat at number six, Sushling played a lone hand as wicket kept falling at the other end. Hari Shankar Shah’s 18 and Haseem Ansari’s 10 runs were other two double-digit scores of the innings which saw some failed rearguard starts. Sushling added 63 runs for the last wicket with Kumar Thapa who stayed unbeaten on seven runs off 14 deliveries. Sushling was the last wicket to fall along with Province 2’s hopes of reaching the semifinals.

Airee and Lalit Singh Bhandari claimed three wickets each. Pawan Sarraf picked two including the important wicket of Sushling. Lalit Rajbanshi and Sagar Dhakal chipped in with a wicket each.

Earlier, Province 2 won the toss and invited Police Club to bat first. Airee’s 64-ball 50 runs helped Police Club get to a good start as the team total was 99 runs for the loss of two wickets at the end of 23 overs. Airee was aided by opening batsman Amit Shrestha’s 37 runs off 65 deliveries which included five boundaries. However, Police Club lost four wickets adding next 23 runs as the innings got derailed. Apart from Rashid Khan’s 36-ball 15 runs none of the other lower order batsmen were able to make any impact as the innings closed on 183 runs for the loss of all its wickets in 48.1 overs.

Group D matches will start from Saturday. Malaysia XI will face Sudur Paschim Province in the first match. Gandaki Province is the third team in the group. The winner of the group will qualify for the semifinals. Province 3, Tribhuvan Army Club and Nepal Police Club have secured its respective berth in the semifinals.