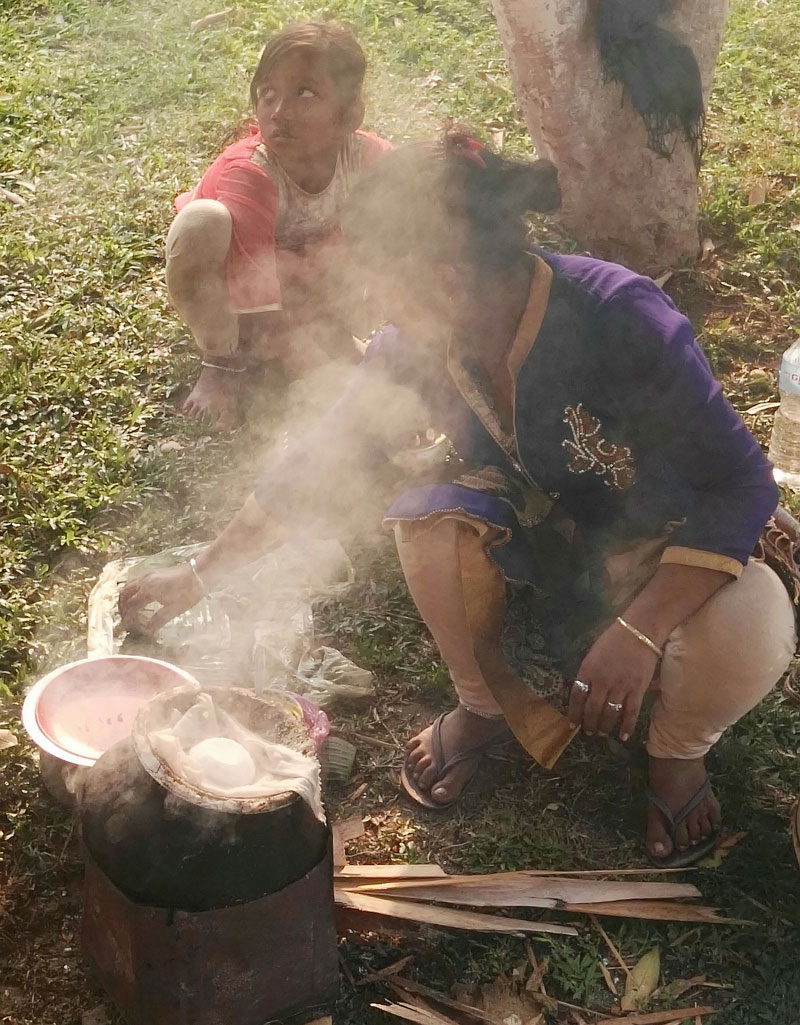 Where are Nepali women in the metaphor of coffins, bakasko bimba, which pervades pathologies of remittance reporting?
Three to four coffins that arrive on an average at the Tribhuvan International Airport have become a metaphor of apparent Nepali prosperity. In the resource-starved economy of hills and mountains, subsistence agriculture has always been supplemented by remittances. The Treaty of Sugauli only formalized the system of sturdy young men from mountains serving as loyal warriors in foreign forces.

Exodus of restless youngsters was one of the contributing factors behind the apparent stability of Ranarchy for over a century despite frequent palace coups. Brothers killed brothers in grand palaces and cousins conspired against each other inside Kathmandu Valley but peace prevailed in rest of the country as it was regularly denuded of able-bodied youngsters. After having been suppressed ruthlessly for decades, residents of the Valley had lost the will to fight back and had begun to disperse throughout the country as minor traders in search of livelihood. Agriculture continued to be the mainstay of economy, but the biggest Nepali export has always been export of ‘manpower’.

It is difficult to put a date, but the ‘tradition’ of women being tricked and then trafficked to the harems of Muslim Nababs and Hindu Rajas and courtesans of rich merchants of the Ganga plains is also quite old. However, human trafficking to the brothels of Calcutta and Bombay is of relatively recent origin. It probably began when the Second World War brought vagaries of large-scale warfare that required ‘rest and recreation’ for soldiers and services of so-called ‘comfort women’ to the doorsteps of southern Asia. It intensified during the Panchayat regime as greed spread as a national malaise deep into the countryside.

There is such a hue and cry about protecting stucco palaces of Rana-era as ‘national heritage’. In fact, if there is anything ‘national’ about them, it’s humiliation of the nation.

They are monuments of collective shame. The architecture of almost all such edifices is a cheap imitation of Greco-Roman traditions. They were built with the blood-money of Gorkha soldiers killed abroad in wars that had almost nothing to do with Nepal. Tenant farmers and peasants of Madhesh bore part of the cost of construction in the form of punitive taxes. Craftsmen and workers, mostly from Newar and Tamang communities, were made to toil like slaves to complete these palaces in record time. Keeping Ranarchy afloat for over a century and carrying Shahs over the shoulders destroyed any chance Nepal had had of emerging as a self-sustaining economy.

The government began to withdraw from whatever little services it had promised to provide from mid-1980s as it began to need ever more resources for the upkeep of an increasingly lavish royal family. Patronage system of politics that Panchayat practiced also required more funds than merely foreign aid could provide. Thus began the practice of privatization of essential services. For-profit schools began to sprout. Every pharmacy became a pay clinic as doctors began to devote more time to private practice than at hospitals where they served. The government formed after the People’s Movement of 1990 had inherited a bloated state apparatus and a broken economy.

The early-1990s were also ascendant years of Liberalization, Globalization and Privatization (LPG) theology of political economy. Donors’ darlings were parachuted into corridors of economic planning and management. They may have been technically competent, but they lacked the moral strength to withstand market pressures and machinations of moneybags. Populist politicos needed quick-fix solutions. And thus began the exodus: With no hope of redemption inside the country, youths in ever larger numbers began to go abroad in search of livelihood, liberty and happiness.

Manpower export
The hierarchy of the country’s political economy can be seen clearly in the destination list of Nepali youths. The best and brightest youngsters from families of traditional elite go to what was once the land of liberty and has now degenerated into Trumpistan. Then comes the turn of countries with low emigration barriers such as Australia and Canada that attract ambitious professionals and starry-eyed students. Few of them have any intention of coming back home. From purely economic point of view, all human and material investment that had gone into their education and upbringing is a complete loss. Along with brawn and brain, potentials too drain out with them. Remittance from the so-called First World countries, except Japan, is probably negative as settlers slowly take away proceeds from the sales of their ancestral property or savings of their parents into host bases through unofficial channels.

Only freaks venture in search of jobs in Europe. Former Gurkhas have begun to settle in England these days. Remittance from most European countries is miniscule. However, a significant portion of foreign currency earning comes from workers in Japan and Korea. The Nepali elite rides cars of Korean and Japanese brands, assembled in India, with the proceeds.

Bulk of the money that sustains remittance-based national economy of Nepal comes from oil-exporting countries, which have a hierarchy of their own. Living conditions being marginally better, Malaysia and Dubai are favorite destinations for literate laborers. Then come Sheikhdoms such as Kuwait and Qatar where even unskilled hands are in high demand for dirty, difficult and dangerous jobs. Politically and physically high-risk countries such as Saudi Arabia, Iraq, Bahrain and even Afghanistan are destinations of the truly desperate. Caregivers end up in places as diverse as Lebanon, Israel, New Zealand, South Africa and Nordic countries.

Looking for work in places that require passport and visa is an expensive affair. Most migrants borrow money at usurious rates from unscrupulous moneylenders to go abroad.

Little wonder, most of their earning for years is spent in repaying debts. The poor often opt out of country by simply crossing the ten-yard no-man’s land between India and Nepal.

The hard-pressed and hardy people from high mountains of Karnali go to build roads in the frontier regions of Uttarakhand, Himachal and Kashmir. People from mid-mountains of central and western Nepal end up in Indian metropolitan cities. The Madheshi poor head for Delhi, Haryana, Punjab and Gujarat. Gross amount remitted home may be lower, but there are more Nepalis working in India than all other countries put together.

Where are the women in all these conjectures and stories? Is their role limited to waiting for sons to send money home? That may be largely true among Madheshi families, but it’s estimated that at least 20 percent of Nepali ‘manpower’ export consists of its women of roughly the same age group—between 18-40 years—and many of them remit more money than their male counterparts despite ending up in lower-paying jobs with more stringent employment conditions.

Invisible women
At one session of the ‘Art and Literary Festival’ in Kakarvitta, activist Pranita Koyu raised a provocative issue. Nearly a quarter of all Nepali workers who toil in West Asia, South East Asia and South Asia are women. Like men, women too fall between the age group of 18-40 years—too young to die. Yet, where are they in the metaphor of coffins—bakasko bimba—that pervades pathologies of remittance reporting? In a revelation startling for most in the audience, she stated in a flat tone that out of over a thousand families of workers ‘missing in action’ abroad, only one claimed the identity of a woman. When women disappear or die in West or Southeast Asia as an undocumented worker, her existence is disowned even by families back home. Nobody wants to bring disgrace upon the family by accepting that it had been living off the earnings of its female member.

The story is somewhat similar about women working in India. Families are reluctant to accept women returnees from Bombay that have been rescued by law enforcement agencies or welfare organizations. When girls are tricked away, families in villages try to suppress the news and seldom report to police for the fear of being harassed. Amartya Sen had written about more than 100 million missing women of Asia back in 1990. The situation has probably worsened as female foeticide has spread and preference for sons has gone up with the rise in prosperity, literacy and respectability. Add to that the pain of neglect for the women that sustain remittance-based economies.

If the ground reality is so grim, why is there no hue and cry about it in informed circles? Rampant NGOisation has sapped the energy of feminism. Sublimation of rage through arts and literature has blunted individual efforts. Other than politicization, there is no enduring solution to the social curse of half the population being left out of all mainstream discourses.

Let us prepare Nepal for its glorious future by building the 21st century relevant leadership it deserves ... Read More...

Tourism at all time low in tourist destinations
18 hours ago