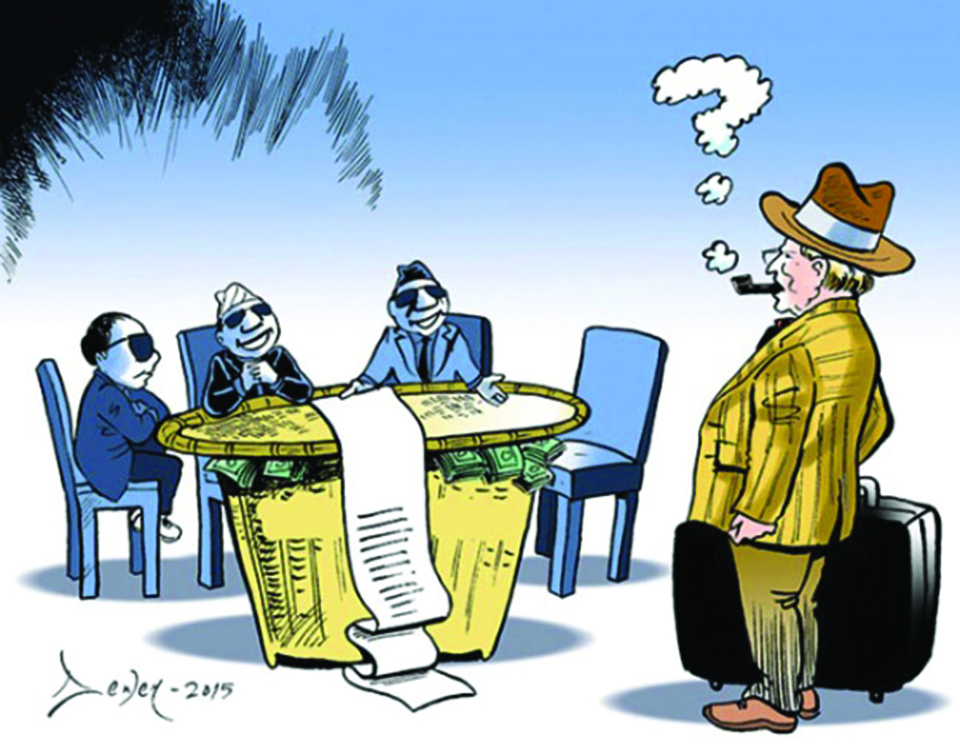 Last month, the Asian Development Bank (ADB), a key multilateral development partner for Nepal, announced that its investment projects in Nepal were under performing. At the review meeting, Diwesh Sharan, ADB’s deputy director general for South Asia, said that “improved portfolio performance will help the country [Nepal] to sustain and further tap opportunities of increased lending space provided by ADB.”

Government issued a strong challenge after it was announced that Nepal had slid five places to 110th in the global ranking on ease of doing business. The Finance Minister, Dr Yuba Raj Khatiwada, himself raged that the World Bank’s methodology for indexing the ease of doing business was flawed.

But the government’s furore will pass. Cautionary tales about the need for “improved portfolio performance” will be forgotten. Dropping from 105 to 110 on the ease of doing business will be just a number.

Life will go on. Like two lovers on a deserted island, government and her development partners will return to their embrace and tango under the moonlight sky with the sounds of waves crashing by their feet. Yonder in the distance, ordinary Nepalis will be fighting the waves to stay afloat and survive.

At a critical juncture of our history, with a new constitution and the prospect of a prosperous future ahead, development aid—grants and loans alike—is failing the people of Nepal. The delivery mechanisms for development aid is financing the monopoly of the state and crowding out change agents.

Aid remains important for Nepal’s development. The federal government’s budget for 2018-2019 anticipates that approximately a quarter of the government’s budget will be met through foreign grants and loans. With no access to international capital markets and negligible foreign investments, Nepal clearly needs development grants and loans to finance a wide range of public spending.

The need for development aid is not in question. The mechanics of aid delivery are under question.

The state is beginning to play a larger role in the social and political economy. Some of it is natural. With sweeping changes, people have pegged their hopes on the government. As legitimate representatives of the people, government must lead on the delivery of these aspirations.

But the government is also exploiting its position of leadership to create a monopoly. Instead of leading and facilitating delivery, it is encroaching upon space that is better served by others. Private sector is a good example. Instead of encouraging private sector, government is eroding the scope for private sector engagement. There is similar encroachment on non-governmental service delivery, such as in education, health, financial services, energy and transport.

Regulating to facilitate is always a lot more challenging. The simpler thing for government to do is simply assert its authority and establish its monopoly. This also offers easy political rhetoric: “We will bring cooking gas to every kitchen.” “We will invest in hydro plants ourselves.” “We will end the transport syndicate.”

For the state and development partners in tango swaying under the moonlight, this may be a glorious dance party. Government’s promises can get larger. Political patronage can get wider. Development partners can show they are doing more stuffs.

But no matter how compelling the monopoly, the government, of course, cannot do everything alone. It needs the full range of actors—private sector, non-governmental organizations, communities, religious institutions and individuals—to work toward the goal in tandem.

In Nepal, the growing monopoly of the state is crowding out change agents.

While many donors are rushing to support local governments, making development finance available only through the central government is rapidly eroding the promise that decentralization once offered. The monopoly of the state, enabled in part by development aid financing, is reducing decentralization to nothing more than a sophisticated patronage network.

The monopoly of the state is also reducing the space for special interest and civilian activism that can act as a counter weight to government. There is no public funding for such associations or activism. Development aid largely flows through government coffers. Domestic private funding for public cause is non-existent. In the absence of meaningful funding opportunities, civilian activism is limited to hunger strikes and protest marches. Such protests are good at demonstrating public anger but ineffective in galvanizing change.

The absence of funding for non-state actors is also limiting technical and other innovation, particularly around adoption of new technologies and ideas.

One way to address these failures is to shift the focus from a discussion about where aid is being directed to how aid is being delivered. The process of aid delivery must enhance public participation, accountability and oversight.

Many of Nepal’s current challenges stem from poor public participation, accountability and weak institutional oversight. Institutions are weak. Even those designed to check the executive branch of the government, such as judiciary and legislature, or constitutional bodies, such as the anti-corruption commission, lack independence and fail on oversight.

For development partners, a wide range of response options are available.

There should be greater public engagement on where and how aid is used. This means engaging more directly with the legislature and public oversight committees in the design and monitoring of development aid projects.

All grants and loans above a minimum threshold must be subject to parliamentary approvals and triangulated through broader public stakeholder consensus.

Delivery channels for aid must broaden beyond the state and actively engage with private, non-governmental and community organizations in ways that directly challenge the monopoly of the state. Government can require monitoring and reporting of independent projects, but it cannot retain authority to approve projects.

These thoughts may stoke your imagination. I’m sure there are many more ideas.

But change requires all development partners to look beyond the tango embrace with government and connect directly with the aspirations of Nepalis.