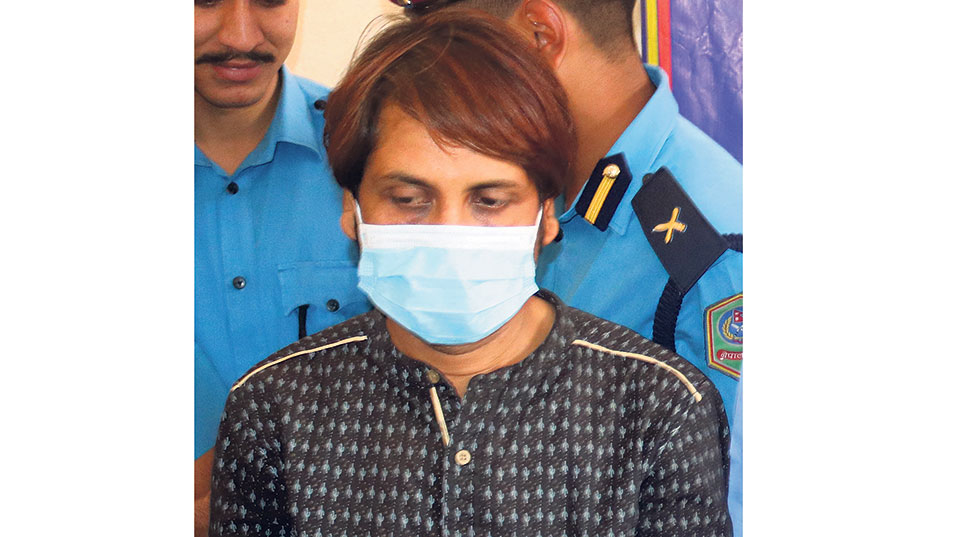 MAKAWANPUR, Nov 3: Acid attack was not heard of in Nepal before it happened to a beautiful girl from Hetauda on one fateful day. It was six years ago. Bindabasini Kansakar, who used to be considered a very beautiful and brilliant girl in the locality, was thrown acid on her face by an acquaintance. She was 20 then and studying in grade 12 in a nearby college. Her dreams were big and confidence high.

“But everything changed after the acid attack,” sighs Kansakar, who on Friday could not control her anger and tried to pounce on 40-year-old Dilipraj Keshari, the guilty who finally landed in police net. Years after the incident, police were able to locate Keshari, who had been absconding since the incident. Police made him public on Friday amid a press meet.

“He ruined my life, why don’t you let me slap him a few times?” a disturbed Kansakar said as the police and her family members tried to stop her from turning violent.

Knasakar had not known Keshari until the wedding of her cousin brother. She used to frequent her cousin’s house, which was nearby, where she sometimes met Keshari. Kansakar’s family had a retail shop, where Keshari started visiting to buy goods. The sole purpose of his visit was to woo her. His interest in Kasnakar seemed to grow day by day.

“He would wait for me on the way to college, on the way back home; he would make frequent phone calls, he would harass me,” reminisced Kansakar.

One day, he proposed to her. She was not ready for the relationship. He came to her house and talked to the family members. Upon this, Kansakar’s father Madhusudhan tactfully dealt with the situation.

“My father talked calmly to him and said clearly that we are not ready for the relationship, so he must stop all this,” she recalled.

But Keshari did not give up. One casual day, he appeared at the shop again. “I was at the shop but I did not pay any attention to him. He was smiling,” she said. “He was carrying a bottle in his hand.”

He came near Kansakar and said there was honey in the bottle. “This is honey, would you take it to your home?” he said politely. Suddenly, he threw the liquid on her face and fled. It was April 22, 2013.

The incident drew widespread media attention. However, it was learnt that he was an Indian national and that made it very challenging for the police to get hold of him.

Kansakar lived a hellish life since then. But this Friday turned out to be a very important day in her life as the police finally nabbed the culprit while he was in Nepal.

“How could I stop myself after seeing him in front of me? I have gone through too much of trauma due to what he did to me. What was my mistake?” Kansakar questioned to her family and the police on Friday at the District Police Office, Makwanpur where Keshari was made public. She has demanded lifetime jail or death sentence for Keshari.

“My medical expenses alone have crossed over eight million. My family members have gone through enough trouble due to the incident,” she said.

As per the existing law, the guilty in acid attack cases get a maximum of eight years of jail term. According to Kansakar, punishment cannot justify the magnitude of the violence. “He also has to pay off all the expenses we have borne due to his insane act,” Kansakar, who has been receiving treatment in India, further said.

According to the police, they had been trying to locate the culprit since long. In addition, they had been given strong directives by the Inspector General of Police Sarbendra Khanal to expedite this search.

“We nabbed him from Bhalohi of Jitpur, Simara Sub metropolis – 23 while he was here to meet his relatives. He is from Amarpurvan ward number 6, of Maharajgunj, India,” said SP Bikashraj Khanal, chief of District Police Office, Bara. “Police made extra effort to locate him, it was not easy,” he added.