Access to finance biggest obstacle to growth for private sector 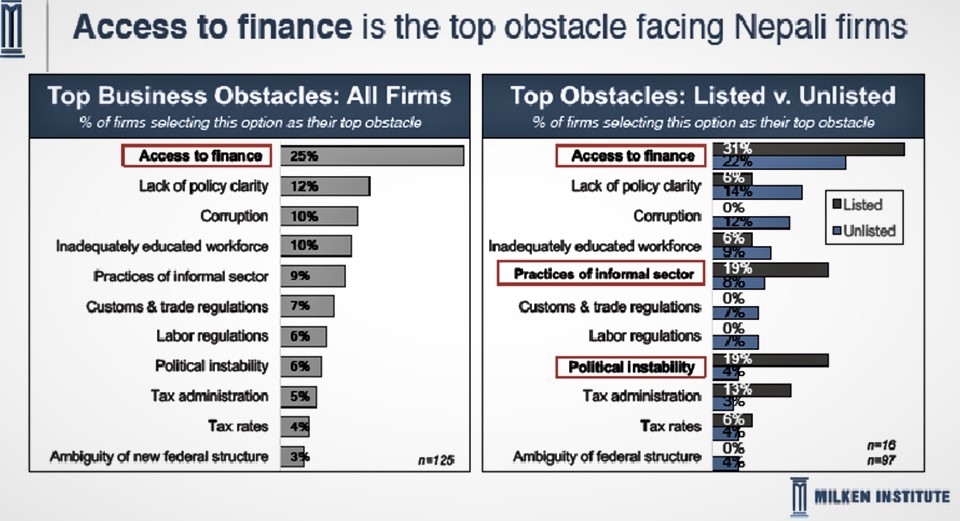 KATHMANDU, May 31: Access to finance has emerged as the biggest obstacle to Nepali firms after the country headed toward political stability and stable supply of electricity, a recent survey carried out jointly by Nepal Stock Exchange (Nepse) and The Milken Institute (MI) shows.

The findings of the survey of 126 business firms carried out jointly by Nepal’s stock exchange company and California-based independent economic think tank, The Milken Institute, indicate a significant progress that Nepal has made in the areas of political instability and access to electricity.

According to the survey’s findings obtained by Republica, 25% of the surveyed firms pointed out ‘access to finance’ as the top obstacle that they have been facing.
This was followed by lack of policy clarity. Twelve percent of those surveyed selected lack of clarity as the top business obstacle.

For 10% of the surveyed firms, corruption was the top obstacle.

Similarly, 10% of the firms pointed out inadequately educated workforce as the biggest obstacle to their business.

While 9% said practices of informal sector were top obstacle for them, it was customs and trade regulations for 7% of the surveyed firms.

Labor regulations (for 6% of firms), political instability (6%), tax administration (5%), tax rates (4%) and ambiguity of the new federal structure (3%) were the top obstacles, according to the survey.
The survey covered 17 listed and 109 unlisted companies. Similarly, 16% of the surveyed firms were from the manufacturing sector.

The survey also compared its results with the findings of the World Bank’s Enterprise Surveys (ES) in 2009 and 2013. It found that political stability had become a relatively lesser concern for Nepali business firms in recent years.

Political instability in Nepal was  identified as the biggest barrier for 62% of the firms surveyed in the Enterprises Survey of the World Bank, while only 6% termed it as the major barrier in the Nepse-MI survey. As many as 49% had pointed it out as a top barrier in ES of 2013.

Electricity was not a top obstacle for any company in 2019 even though it was a major obstacle for 27% of the firms that participated in the Enterprises Survey of 2009 and 26% in 2013.
Access to finance has become the top obstacle for firms who also said this barrier had consequences for business investment and implications for future growth, according to the Nepse-MI survey.

“For Nepal’s entrepreneurs, ranging from small and medium-sized enterprises to large businesses, access to capital is critical to economic growth and job creation,” Curtis S Chin, former US Ambassador to the Asian Development Bank, and Asia Fellow of the Milken Institute, told Republica.

As a majority of companies are attributing access to finance as a major hurdle for their business growth, experts say that there is a strong demand for new funding sources for business firms.
“Development of robust, transparent capital markets is key to any nation’s development, including Nepal,” Chin said. “I remain optimistic on Nepal, but it is clear that here and elsewhere progress must continue to be made in what I call the ‘battle of the bric’ – the continuing fight against bureaucracy, regulation, inequality and corruption.”

KATHMANDU, May 29: Finance Minister Yubaraj Khatiwada is expected to try breathing new life into the economy, with his budget for... Read More...

KATHMANDU, May 14: Finance Minister Dr Yubaraj Khatiwada has said that preparations are underway to bring the socialism-oriented budget as per... Read More...

KATHMANDU, Feb 21: The Ministry of Finance has revised the budget downwards, based on the current dismal spending trend, to Rs... Read More...