A year on, family of a minor killed after abduction still awaiting justice 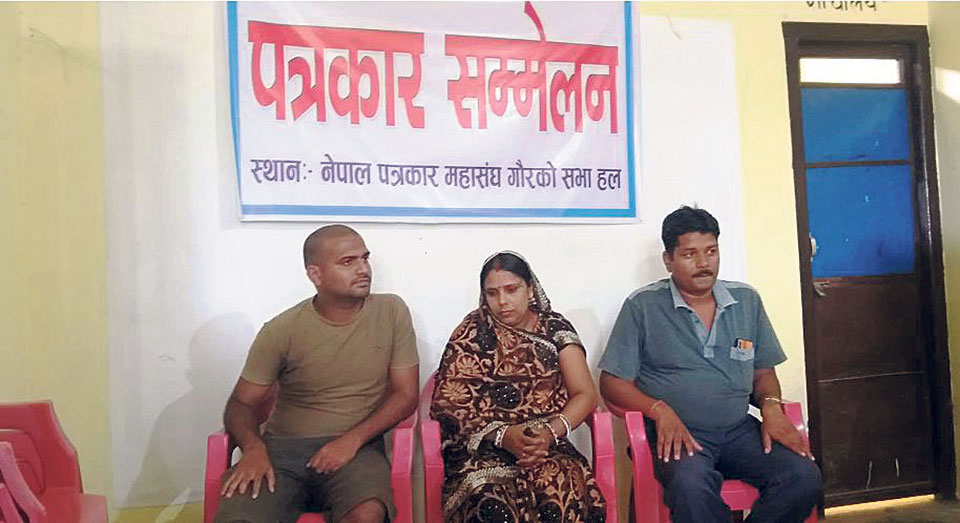 RAUTAHAT, June 14: A year since the abduction and subsequent murder of a minor in Rautahat, his family members are still awaiting justice while the perpetrators are still at large.

Yuvraj Sah, the 13 years old son of Dilip Sah of Dumariya, Katahariya Municipality-9, was kidnapped by a group of 17 people while he was sleeping in his house. Apparently, ward chief of Katahariya-9, Ramagya Ray Yadav, had ordered the kidnapping and the murder. The kidnappers had demanded a ransom of Rs 10 million from the minor’s family.

Unable to pay the ransom, the family members reported the incident to the police. After the police started searching for the kidnappers, they killed the child within 24 hours of the abduction, fearing that he might reveal their identities. The perpetrators had beaten him up brutally, breaking both his legs, shot him in the temple and dumped the body on the embankment of the Bagmati River.

Organizing a press conference on Thursday, the victim’s family demanded justice. Speaking at the press conference organized on the premises of the Federation of Nepali Journalists (FNJ), Rautahat chapter,  they said that the police had filed a complaint against 17 persons including ward chief Yadav but only 12 of them were arrested, including the ward chief.

The arrestees were remanded into judicial custody by the Rautahat District Court. However, the Birgunj-based High Court released Krishnavatar Yadav, Biki Ray Yadav, Sudhir Ray Yadav and Bholaray Yadav on bail on November 10, 2018, according to the victim’s father Dilip.

Dilip claims that pressure is being mounted on the authorities from various quarters to release ward chief Ramagya Yadav, Krishna Yadav and Rambalak Yadav. Babita Devi, the mother of the victim, said that the release of those accused of kidnapping and murdering her son is a grave injustice.

“I can never forget how my only son was murdered by these people. The decision of the court to release them without any punishment has added insult to our injury,” laments Babita Devi.

Talking to journalists, the victim’s family said that ward chief Yadav along with two other accused filed an appeal at the Supreme Court and the hearing on the case has been scheduled for Friday June 14. “After losing my son, all I want is to see the perpetrators behind the bars. However, looking at the current situation getting justice seems difficult,” said Babita Devi.

Dilip and Babita are both health workers by profession.  They have urged the police to arrest the other five accused, including Police Constable Hoshnarayan Yadav, who are still at large.

This was a case of dispute among IGP contenders and Supreme Court was the right authority to review the appointment process Read More...

Hearing on case against Home Minister Lamichhane continues
31 minutes ago

Four arrested with illegal drugs in Janakpur
48 minutes ago