Govt deploys counseling teams from door to door in Kharitpati 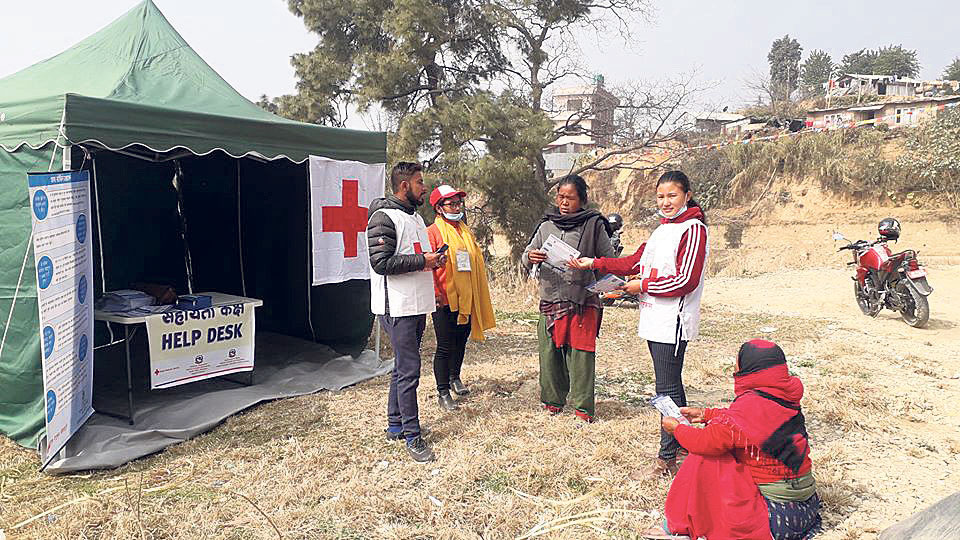 BHAKTAPUR, Feb 20: The government has deployed campaigners in Kharipati of Bhaktapur district for counseling the locals about ways to deal with the possible threats of cornoavirus. The teams have been campaigning from door to door explaining the people about coronaviurs and the safety measures that one needs to adopt to avoid being infected. They are seen counseling people while distributing pamphlets, leaflets and masks in the locality where the government has quarantined Nepali students who were evacuated from China on Saturday. The government took this initiative after some locals of Kharipati reportedly abandoned their homes fearing spread of the flu.

The government has kept the China returnees, most of whom are students, on the premises of Nepal Electricity Authority at Kharipati. Those who were rescued from the epicenter of coronavirus have thanked the government for the best possible arrangement for them during such a testing time. Their blood tests have turned out negative, which confirms they are not infected. However, they will remain in quarantine for nine more days for further observation.

Earlier, the awareness programs were targeted to schools, colleges and other public areas only. But following the news of the locals of Kharitpati becoming panicked over the issue, the door-to-door campaign was launched on Tuesday.

The Ministry of Health and Population has been working closely with Nepal Red Cross Society and other organizations for spreading awareness. According to Bhaktapur's CDO Humkala Pandey, masks have been distributed to the people.

As the crew members of the aircraft that brought the Nepalis back from China have been kept in quarantine at Nagarkot, help desks have been set up there too and campaigns launched.

The locals of Bhaktapur had turned a cold shoulder to the Nepali students returning from China fearing coronavirus outbreak in their locality. But the government chose it as a suitable place for handling the case. The outbreak of coronavirus (COVID–19) was first reported in Wuhan of China on December 31 last year, and has claimed around 2000 lives so far.

KATHMANDU, Feb 20: All the 175 Nepalis evacuated from China’s Hubei province and quarantined at Kharipati in Bhaktapur since Sunday... Read More...

BHAKTAPUR, Sept 5: A separate isolation center has been set up for police personnel infected with the COVID-19 in Bhaktapur. Read More...