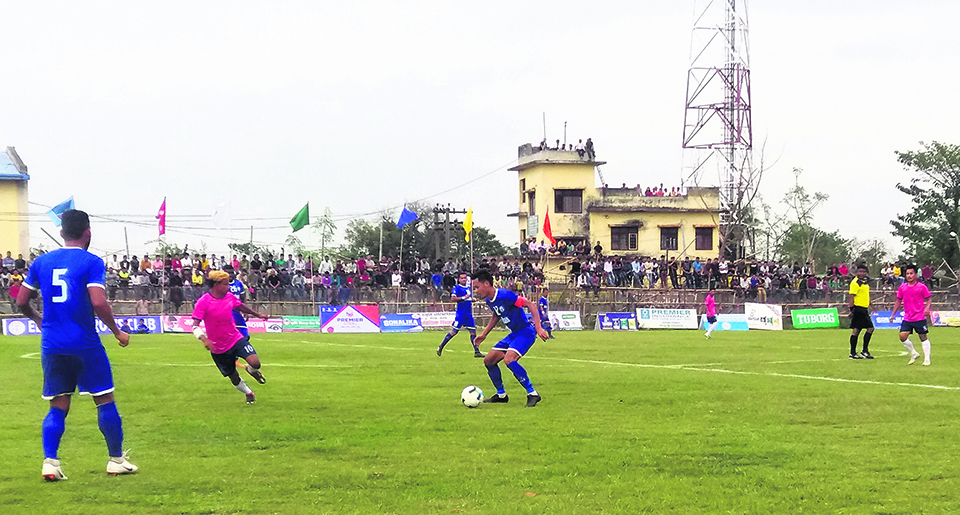 Players of Three Star Club and Eleven Arrows Club Duhabi in action during a quarterfinal match of the Duhabi Gold Cup football tournament in Sunsari on Monday.

Favorites Three Star secured a semi-final clash with departmental team Tribhuvan Army Club on Wednesday after defeating the host team 4-1 in one-sided tie-breaker to
enter the last four of the gold cup.

Both teams finished the 90 minutes on 0-0. Neither the teams was able to break the deadlock in the eight minutes of stoppage time. Duhabi’s team Arrows took most of the advantage of home conditions to deny Three Star an outright win. However, the host team failed to win in spot-kicks.

Ranjit Dhimal, Sunil Bal, Bijay Dhimal and foreign players Mansan Behagi converted their penalty kicks for Three Star whereas Jivan Dhami was the only scorer for the home team. Duhabi’s Roshen Bhujel’s shot was swayed away by Star goalkeeper Alan Neupane whereas Umesh Rai’s strike rebounded after hitting the post.

Duhabi’s goalkeeper Surya Adhikari was announced the player of the match for making crucial saves throughout the match. He received Rs 10,000.

The winner and runner-up of the Duhabi gold cup football tournament are set to receive Rs 600,000 and Rs 300,000 respectively. The football event is organized by Manmohan Memorial Trust in partnership with home team Eleven Arrows Club.

POKHARA, Dec 3: The Aaha RaRa Gold Cup football tournament is to be held at the local Pokhara stadium from... Read More...