ANFA to organize U-18 football tournament and women's league 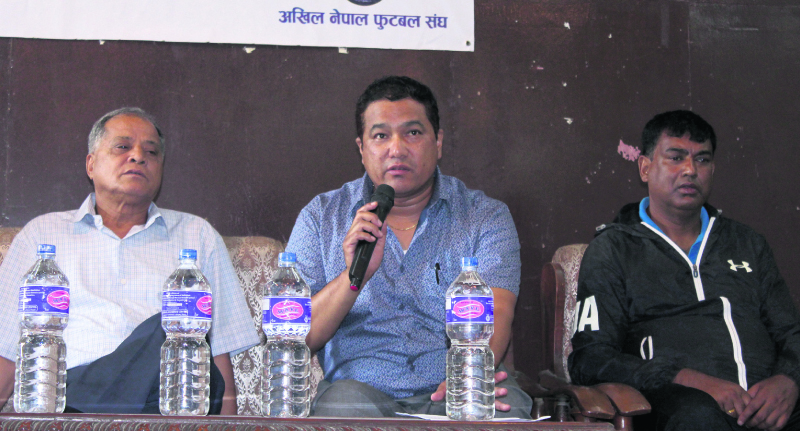 KATHMANDU, May 26: All Nepal Football Association (ANFA) announced on Friday that it will host two tournaments including Lalit Memorial Youth (U-18) Football Tournament and ANFA Women's League Championship.

The U-18 football tournament that will feature 16 youth teams from first tier clubs will begin on Saturday at ANFA Complex, Satdobato while the women's league that will see the participation of 28 districts teams will be held in Syangja and Palpa from May 30.

A total of 16 teams in U-18 tournament will be divided into four groups. Rumpum Jhapa XI, Nepal APF Team, Sarashwoti Youth Club and Chysal Youth Club are drawn in Group A while Tribhuvan Army Club, Friend's Club, Manang Marshayngdi Club and Far-west FC are pitted in Group B.

The ANFA has provided Rs 100,000 as preparation amount to all the participating teams.

The winner of the tournament will take home Rs 300,000 home while the runner-up will be awarded with Rs 150,000. Similarly the best players in each position - goalkeeper, defense, midfield, forward-alongside best coach will be rewarded with Rs 10,000.

This tournament will also serve as the base for selection for the upcoming AFC U-19 Qualifiers.

In the opening day of the tournament, Rumpum Jhapa XI will take on Chyasal in the Group A match while Army will face Far-west FC in the Group B match.

Women's league
Meanwhile the women's league will be played in two different districts including Palpa and Syangja.

In Palpa, Group A consists of Kathmandu, Bhojpur, Kanchanpur and Makwanpur while Group B includes Jhapa, Dang and Mahotari. Similarly Taplejung, Sindhupalchowk, Sindhuli and Saptari are pitted in Group C while Kailali, Udayapur, Chitwan are drawn in Group D.

In both places, winners from each group will advance to the semifinals with Group A winner taking on Group B winner and Group C winner competing with Group D winner.

Eventually the winners from Palpa and Syangja will be competing with each other to lift the league trophy.

A total of 30 players from the league championship will be selected and 10 players each will be sent to the three departmental clubs -Armed Police Force (APF), Tribhuvan Army Club, Nepal Police Club (NPC)-for two months long training. The national women's team head coach Kumar Thapa and Coach Mrigendra Mishra will select those players.

During the training that will be held after the completion of the league, ANFA will pay salary of Rs 5000 to each player and the Nepali football governing body also will provide accommodation to them.

After the completion of the training, ANFA will host President Cup that will feature two teams each from three departmental clubs.

Those 30 players will then represent their respective regions in the upcoming Women's National Championship which will feature a total of eight teams including five regional teams and three departmental sides.

ANFA's President Narendra Shrestha said that the change in domestic women's football system will prevent the dominance of the departmental teams in the upcoming national championship. He also expressed his belief that this change will be fruitful in order to make the national women's team stronger.

KATHMANDU, Dec 30: The 16th Women’s National Football League is all set to start from Sunday under the National Sports Council... Read More...