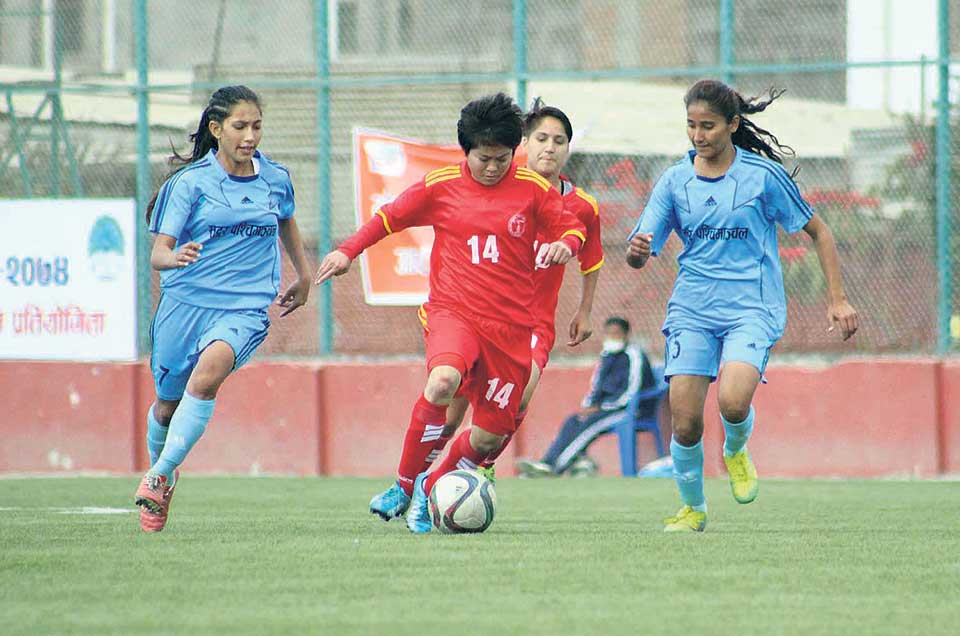 Players of Nepal Police Club (red) and Far-western Region in action during the 16th National Women’s Football League at the ANFA Complex in Satdobato, Lalitpur on Tuesday. Photo Courtesy: ANFA

At the match played at ANFA Complex in Satdobato, Chandra Bhandari scored the first goal for Far-western in the 16th minute, but NPC fought back and secured 2-1 in the second half. NPC’s Niru Thapa equalized for the departmental side in the 57th minute, while Nirmala Upadhaya scored the winner in the 65th minute.

NPC head coach Sanjeev Joshi praised his team’s effort and the coordination among the players in the second half.

“The opponent played better than us in the first half, but our teamwork and coordination were excellent, which helped us get the victory,’’ Joshi said. “They are a very good team and they played very well.’’

However, Far-western’s head coach Dabal Bahadur Thapa said he was happy with his team’s performance.

“I am happy with my team’s performance and I think we are capable to play in the super league,” he said.

In the other match played on the same day, Central Region comfortably beat Eastern Region 4-0 to grab its first win of the championship.

Rashmi Kumari Ghising grabbed her brace with goals in the sixth and 81st minutes of the match, while skipper Menuka Nagarkoti scored from the spot in the 32nd minute and Sabita Rana Magar managed to get a goal in the 61st minute to get a commanding win.

KATHMANDU, Dec 30: The 16th Women’s National Football League is all set to start from Sunday under the National Sports Council... Read More...