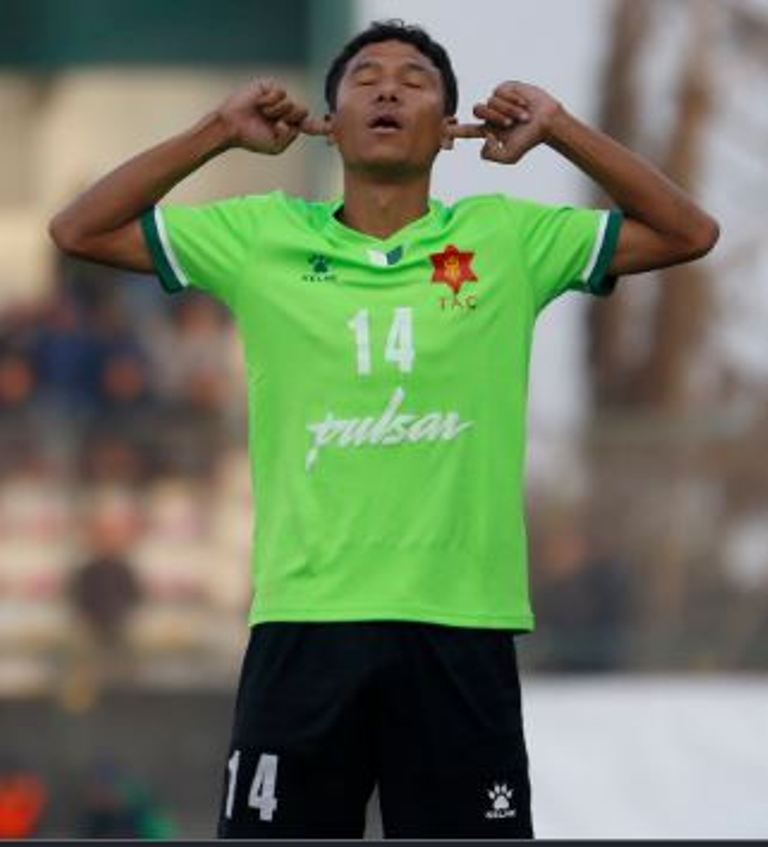 KATHMANDU, Jan 2: Tribhuvan Army Club inflicted the first loss on Three Star Club on the New Year day as two second half goals ensured a 2-0 win for the departmental team to move into the third place in the ongoing Qatar Airways Martyr’s Memorial A-Division League in Lalitpur on Wednesday.

In the pick of the gameweek played at the All Nepal Football Association (ANFA) Complex in Satdobato, second half goals from Nawayug Shrestha and Santosh Tamang imposed the first loss of the season on Three Star as Army registered its third win in four league matches.

It was a special day for Tamang as he was absolved of the ban imposed on him for partying and being drunk late night in Thamel before Nepal played a 2022 FIFA World Cup Qualifiers (AFC) match against Kuwait. Wednesday's match was his first after the incident, and the midfielder scored a goal on his return.

“We were feeling the lack of midfield players who would supply the ball to the forwards. That’s the reason we played Nawayug and Bharat (Khawas) from the midfield,” Neupane said.

“We could not play as expected before. The team is complete with the arrival of Santosh. It was difficult for us at the end of the last season since we played draws against many teams. It will be easier for us now since we got points against Three Star. Nonetheless, we have still many grounds to improve.”

Both the teams failed to score a goal in the first half as they played attacking football early on and absorbed the pressure in the midfield.

Three Star missed the defensive performance and creativity of captain Bikram Lama, who faced a game suspension after reaching the limit of two yellow cards in four games.

Army was dominating throughout the game, creating majority of the chances. Three Star could not do much, but it had a few opportunities that it could not convert.

Shrestha took the lead for Army in the 54th minute as captain Khawas dribbled past Three Star center back Ananta Tamang and gave an aerial pass to Shrestha. Shrestha then hit an acrobatic shot to draw first blood for Army.

Shrestha had a chance two minutes earlier to take the lead, but he could not beat Three Star keeper Gullaume Yves Priso Njanga in a one-versus-one situation. Ananta could not clear the ball, and allowed Shrestha dribble it inside the box. But his shot was brilliantly saved by Njanga.

With the lead, Three Star was already under pressure, and Army doubled its lead in the 79th minute, completely ending the opponent's chances. Santosh scored a beautiful free-kick goal into the top right corner. His celebration showed how concerned he was with the ban, as he put his hands behind two ears while gesturing to the fans. Santosh expressed his grief of missing football for one and a half months.

“I missed football a lot during the ban time. I broke down to have missed out from the team at an important time,” Santosh added, “I was eagerly waiting to be back on the field again when the league started.”

Army could have taken the lead in the first half through captain Khawas, but his poor finishing let the team down.

Three Star’s Mikchhen Tamang hit a shot from inside the penalty box, but it grazed wide. Rupesh KC nearly had a brilliant return from injury as he beat three Army defenders, but a shot from 20 yards out went just over the bar in the 12th minute.

Army’s Santosh had a chance four minutes later, but his cross from near the penalty area was headed out off target by Nawayug.

Army was still on the attacking mode with counter attacking football as Three Star could not handle the threats from the front three of George Prince Karki, captain Khawas and Nawayug.

“Army kept us under the sword throughout the game. We mispassed a lot, and we could not handle their pace. I missed Bikram in the team. Ananta and Bikram had a good partnership since the South Asian Games. When Ananta went to take Bikram’s plce there, we conceded. With that, the confidence has decreased.”

With the win, Army has nine points from four matches with three wins and a loss to holder Manang Marshyangdi Club. Likewise, Three Star is down the sixth place with seven points as it has won two, drawn one and lost one.

In the other game played on the day, the other departmental team Nepal Police Club registered its second win of the season with a 2-1 victory over Sankata Club.

Amit Tamang of Sankata was unfortunate to score an own goal in the 15th minute, but the last season’s runner-up drew level three minutes later.

However, Suman Lama restored Police’s lead in the 33rd minute to win the game.

With the result, Police has seven points from four games with two wins, a draw and a loss. It is in the fifth place. Likewise, Sankata is 10th with a win, two draws and a loss.

The fourth round will end with an important match between Armed Police Force (APF) Club and Saraswati Youth Club as both the teams are yet to win a game this season.

KATHMANDU, Jan 8: Friends Club and Himalayan Sherpa Club shared the spoils of a 0-0 draw as both the teams... Read More...

KATHMANDU, March 1: The All Nepal Football Association (ANFA) has signed different agreements for four years for the football development with... Read More...

Apples worth Rs 500 million exported from Mustang
49 minutes ago