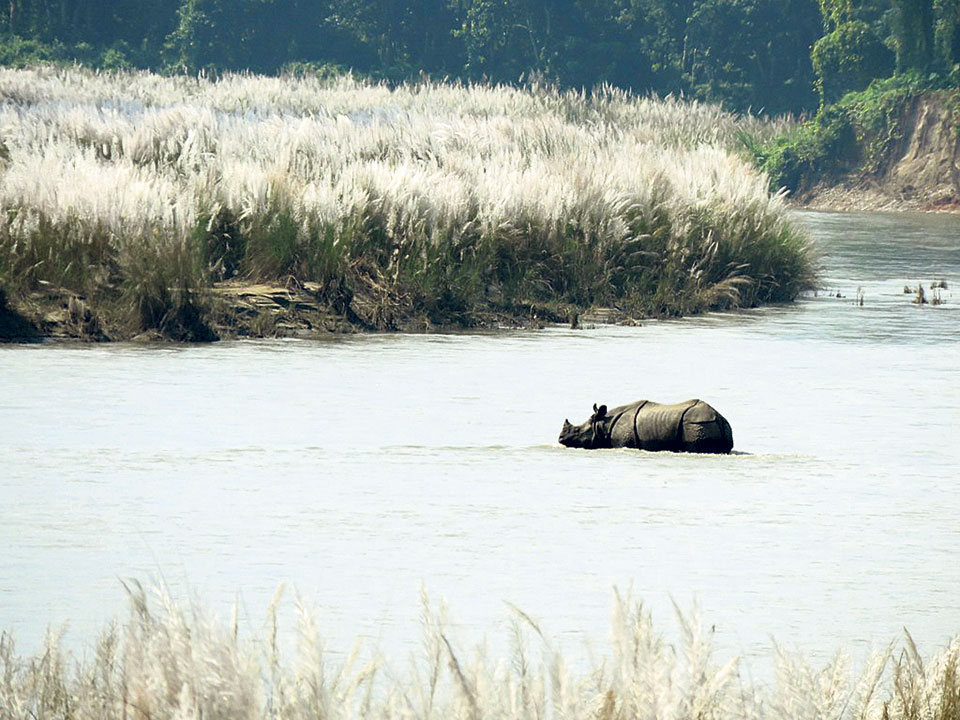 A rhino is seen in the Rapti River that passes through the eastern sector of the Chitwan National Park in this recent picture.

CHITWAN, March 25: On Sunday a female rhino in Chitwan breathed her last. She was spotted dead near a septic tank of a hotel in Jagatpur, Bharatpur Municipality – 23. With this, the number of rhinos to die in Chitwan in the last nine months has reached 41.

According to Gopal Bahadur Ghimire, information officer and assistant conservation officer at the Chitwan National Park (CNP), most of the deaths were natural while some were accidental.

“We have lost 41 rhinos in the last nine months. Though most of these deaths were from natural causes or non-maligned human mistakes, there are areas where our conservation efforts should focus in the days ahead to reduce wildlife fatalities,” he said.

The figures are shocking for a country that earlier drew the attention of the world by celebrating zero poaching years of rhino.

Authorities claim that the animals have died of natural cause. Ghimire stated that the age factor has played a major role in the deaths this year.

“There are many other factors, but the age factor is the most vital,” he said.

This rhino’s habitat was ‘Hariyali Community Forest’. On Saturday, it had entered the hotel area. Reportedly, the cover of the septic tank was fragile and it could not bear the load of the rhino when it walked over it.

“During our investigations, we found that the septic tank’s cover could not hold the weight of the rhino and caved in while it was walking over it. The rhino fell into it and did not survive,” said Ghimire.

According to Ghimire, the tragedy could have been averted if the hotel had covered its septic tank with a more strong cover.

“Even though this is a jungle area which is home to many species of animals, people do not seem to be that sensitive or concerned about their safety. Such negligence costs dearly to the wildlife here,” Ghimire noted.

Humans indeed do not look cautious even in the buffer zones. Prior to this, Rhinos have died after falling in muddy holes as well.

On Sunday, CNP officials took the rhino’s body for post-mortem and informed that the report would come in a few days.

During the last month, three rhinos were found dead and in the month before that eight rhinos had died.

As per the 2015 census, Nepal had 645 rhinos. Those were all from Chitwan National Park and the areas around. Last year, 26 rhinos had died including 14 female rhinos.

“Some rhinos die also during labour pain. This is very tragic, but this has happened,” said Ghimire.
Similarly, rhinos die due to fighting between themselves.  This is also natural in the world of rhinos. Another reason for their death is trapping, intentional or unintentional by humans.

“This is the area where we can make improvements. If efforts are made to raise awareness among the people, vulnerable wild animals could be saved,” Ghimire noted.

Even floods came as a challenge for rhinos last year. Massive floods had made it very difficult for the elephants and rhinos of Chitwan.

“Due to their size, they are sometimes in a difficult position. It is very hard for them to avoid traps - intentional or unintentional. Last year, flooding had affected all animals here, rhinos were severely affected,” Ghimire reminisced.

Similarly, some rhinos have died due to electric shock. Injuries have also taken the life of a few rhinos. “Rhinos have died due to injuries they sustained from other wild animals. Some of them are injured by tigers also. If injured, some get better, but some succumb to the wounds,” Ghimire informed.

Some rhinos also die after they fall ill. ‘Despite good care and medical interventions, some do not recover, they die.’ Rhino calves are also quite vulnerable. They are often targeted by tigers.

“There are many factors behind their death. Though poaching has been largely controlled, rhinos are still vulnerable,” Ghimire said.

The scenario indeed paints a grim picture of the safety of wildlife. This certainly calls for better strategies for wildlife conservation. According to Ghimire, the national park has taken the issue seriously.

“We have been examining the factors that contributed to the deaths of the rhinos. This is a serious matter for us,” he said.