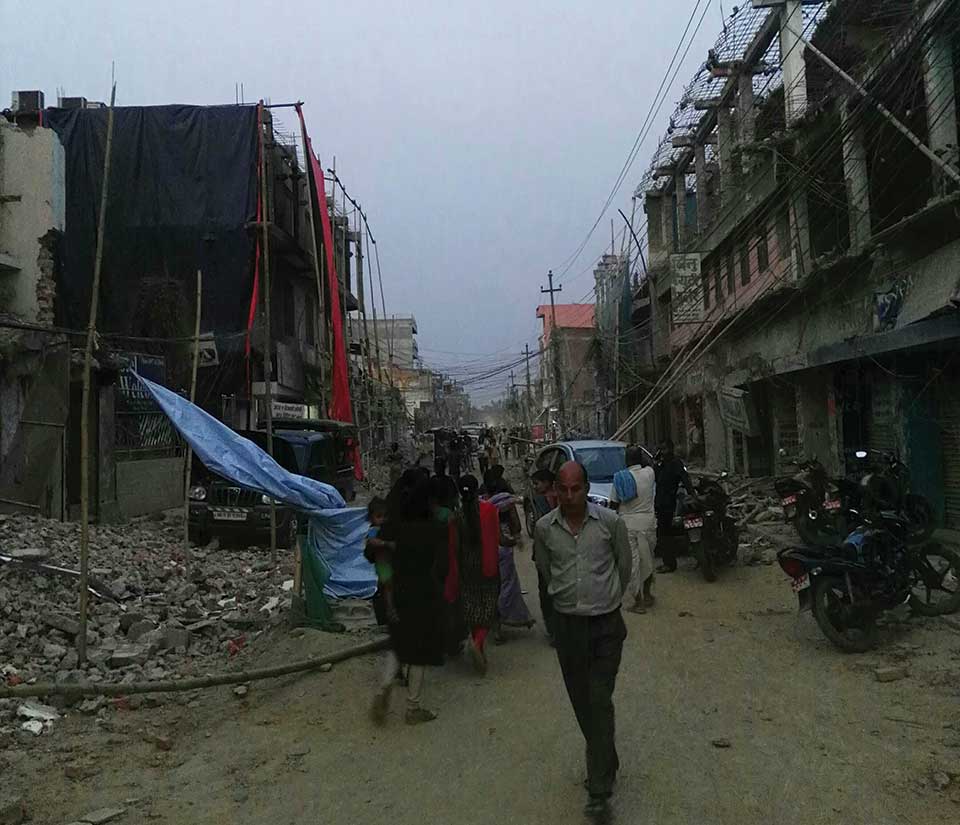 If the level of the civic culture is measured by the way human waste is
handled, none of Nepal’s settlements is fit to be called an urban center

Perhaps there is a reason regime in some of the poorest of poor countries promise to deliver prosperity through infrastructure development on a war footing. The key phrase of the assurance is ‘on war footing’ for that’s what actually happens when the developmental juggernaut begins to roll.  Like many other settlements of Nepal, Janakpur resembles a veritable war zone with security personnel and earthmoving equipment working in tandem to dismantle roadside structures.

Built with Indian assistance at the height of Cold War rivalry in the late-1960s, the Rajarshi Janak Path was once the main thoroughfare of the settlement. It began at the Railway Station and after passing through Bhanu Chowk, Shiva Chowk,  Janak Temple, Dhanush Sagar, Ram Mandir, Gopalji Dharmshala, Bidyapati Chowk, Campus Chowk and Fisheries, terminated finally at the service road towards the airport. An extension that is now being widened and upgraded continued onwards to the international border in Jatahi and then to the Indian national highway network.

Connected to important city nodes through service roads, the Path functioned as the spine of the city. The entire network stands ravaged by the developmental machinery.

All main roads have been dug up to lay stormwater drains. Houses are being torn apart to widen the pavement. And the city life goes on regardless for the development is being delivered to the doorsteps of residents. In Maithili, there is an intoner with which small children are lifted up and brought down to the ground—nav ghar uthe, puran ghar khase—meaning new house comes up and the old one goes down. The development industry works the other way round: The old ones have to make way for the new.

There is a reason protests against the mayhem have been muted in an otherwise politically conscious town. Denied ‘development’ for decades, there is a palpable sense of enthusiasm that something is finally happening in the sleepy settlement.

The massive Gopal Dharmshala was funded by Raibahadur Baldevdas of Calcutta. Soviets set up the Janakpur Cigarette Factory. The highway connecting the settlement with India to the south and East-West Highway in the north as well as the Path in the town was constructed with Indian assistance. Indians also built the airport and the water supply system. The Japanese pitched in to initiate agricultural development facilities.

All that the government of Nepal did by way of investment was to establish huge barracks for the security forces. Since a collection of tax was an important activity, the Nepal Rastra Bank erected what was once the most modern building in town. There is a sense of anticipation in the settlement that their government is also finally doing something; even though what is being done is inadequate, if not outright inappropriate.

West land
Though much derided for lacking originality, clichés have their uses. Iranian intellectual Jalal Al-I Ahmad was first to notice what he called ‘Occidenentosis’, a word he speaks ‘as of tuberculosis’ in the opening line of the eponymous book. Many sociologists prefer to use the term ‘Westoxification’, with emphasis on the suffix that implies toxicity. These expressions are opposed to the concept of westernization, which stands for coming under the influence of cultural, economic and political systems of Europe and USA that was largely brought about by French, American and Russian revolutions.

The process of westoxification is an obsession with symbols rather than the substance of modernism. Development is the shorthand for what the ruling elite want the rest of population to desire. Westernization implies what the French once chanted as ‘liberté, égalité, fraternité, laïcité’ meaning freedom, equality, fraternity, and secularism. The liberal mantra includes principles of rule of—and not by—laws made in a participatory manner that are applied justly by an accountable, elected, responsible and transparent authority.  All that the process of westoxification wants is transform every conscious citizen into amoral consumers.

It’s difficult, if not impossible, to remain untouched by westoxification. In the name of commercial production, attempts to turn every farm into a factory are being made with identical seeds, similar fertilizers and harvest that look alike. Marketing and distribution are being centralized with few companies dominating the scene. Plastic pouches hang from corner stores that bewitch onlookers to buy more. Education is sold from for-profit schools and the illness industry is making a fortune through lucrative investments in healthcare facilities such as machine-based diagnostics and symptomatic treatment techniques.

When production and consumption habits change, settlement patterns have to follow suit. In the feudal concept of power rings, the ruler occupied the central space surrounded by his courtiers and priests. The inner circle housed merchants and the gentry. Outer layer was usually for farmers, artisans, itinerant traders, craftsmen and visitors. Outcastes were consigned to the periphery when not externalized all together.

Commercial settlements grew from river banks or seashores upwards. The tranquility of uptown mansions and the serenity of suburbia as compared to the busyness of downtown are features of trading towns. Industrial settlements gave birth to zoning practices that protected the privacy and privileges of mill owners.

When colonialists began to expand inland and overseas, the discipline of town planning was born. Since travelling from point A to B in minimum time with maximum comfort at a reasonable cost is its main characteristic, radial or cardinal roads are fundamental features of town planning. Emphases are then placed upon utility buildings, physical infrastructures such as water supply, sewer and solid waste disposal systems. Since it all costs money, towns are supposed to be for the affluent. The poor can commute from outlying areas or villages where they can survive on whatever they get.

Modernist desires
Town planning was place-centric; the idea of urban planning was born to put people at the center of all developments. Roads are necessary; but it’s not cars they need to carry but people and goods. More the mansions, the more slums grow to serve them. The city design has then to accommodate all kinds of people. Then there is the matter of not just the built environment but living heritages.

Ponds require as much wooded banks—called bhir in Maithili—as the actual waterbody to survive. Land grab has robbed Janakpur’s once famous ponds of their flesh and skin and many of them survive as fish farms. Apart from wild jungles, there are at least four Maithili words for woods that exist with or near settlements. The first is ban, which means an uncultivated area with tall trees and dense shrubs. Upban refers to cleaner ‘sub-forest’ with trees that bear flowers, fruits and leaves of usable variety. Gachhi was a place where fruit trees have been nurtured for the use of the family or community. Lowest on the rung was gachhuli where one planted trees for future generations. None of these have survived in Janakpur.

Little wonder, no one sings chaitawar (songs lamenting separation during the spring) anymore and calls of cuckoo sound maddening in the middle of constant jackhammer thuds, excavator thunders and motorcycles wheezing past the mêlée.

Roads have recently been dug just to lay storm water drains. Water pipes must be on its way. There is no provision of sewer line, so the sludge will continue to clog surface drains where flies and mosquitoes will breed as usual. No satisfactory arrangement has yet been made to dispose of solid waste. If the level of the civic culture is measured by the way human waste is handled, none of Nepal’s settlements is fit to be called an urban center.
Janaki Temple is within 15-minutes of walking distance from anywhere on the Parikrama Road.

The area could easily be turned into a pedestrian-only zone with permission for electric vehicles to serve the aged, the ill, the child and the new mothers. It’s possible to transform the town plastic-free to make it a real ‘Dham’ where the very earth is sacred. But all that requires a complete rethinking and political will. Meanwhile, it’s fun to watch massive equipments bring down other’s houses. Schadenfreude is intense when one’s unfulfilled desires are falling around, which is what seems to be the reason behind the exhilaration of lumpen bourgeoisie.

Since it’s so unsettling, residents in the capital of Madhya Madhesh don’t want to remember the ruthless crushing of the Third Madhesh Uprising. Howsoever unrealistic, developmental dreams are relatively reassuring.

Core issue of public life in Nepal is still Madhes. The longer PEON hides its face, higher will be the... Read More...

Hearing on case against Home Minister Lamichhane continues
42 minutes ago

Four arrested with illegal drugs in Janakpur
59 minutes ago