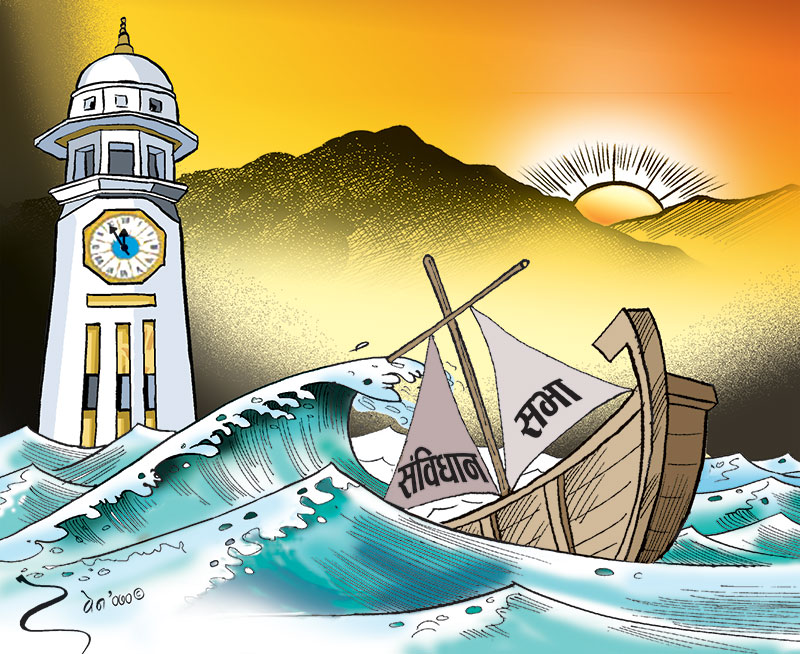 The new draft constitution of Thailand proposes a new phase of political instability by institutionalizing proportional representation
Nepal has just come out of a grueling process of constitution-making through two consecutive Constituent Assemblies, whereas Thailand is on the verge of giving birth to a new constitution through a referendum. But what Nepal is aspiring for, Thailand is bent on abandoning. It is political stability that stands out as the tricky issue in these two ancient Asian countries.

The new draft constitution of Thailand proposes a new phase of political instability. Stability, its military apparently leaders believe, will harm the country by entrenching high-level corruption. By contrast, Nepal is regretting not ushering in a directly elected executive for the sake of stability and order.

Wittingly or unwittingly, Thailand seems to be following Nepal’s road of perpetually unstable government by promoting proportional representation. A coalition government comprising of political parties of diverse hues is, to say the least, short-lived, ineffective, corrupt and ungovernable. So why does Thailand wish to follow this misguided path?

It is the army, which has been playing an active and, most of the times, central role in administering the country. It steps in whenever there is political chaos, starting 1932, when its monarchy ceased to wield power but which to this day continues to command unquestioning loyalty and respect of common Thais. Nepal, for its part, witnessed a rise and fall of monarchy starting 1950, when its power was restored by a popular movement against the Rana rule.

Not that the kings did not try to build the country in their own terms. But traditional institution of centralized power in the palace became an anomaly of the times. Unlike Thailand, Nepal suffers from lack of free access to sea and is mind-locked as well as land-locked. Nepal fell to ultra-leftist communists at a time when the world observed downfall of communism following the rise of Mikhail Gorbachev in the Soviet Union, at a time the communist ideology was discredited around the world.

In the process of political turbulence that took over the country in 2006, monarchy was thrown out, more out of vengeance of a foreign power than because of internal popular wrath. Nepal lost a rallying point so meticulously pronounced during the times of national crisis. Thailand has preserved it assiduously.

It is difficult for Nepalis to understand why Thailand is trying to take the route of unstable administration that has proved to be development bane for Nepal.

Recent British referendum should be a cautionary example for Thais. Even the British people who voted for leaving the European Union later regretted their decision. Are not the Nepalis who voted in the political parties, which turned out to be a self-serving bunch, feeling remorseful at their own doing? Ironically, neither Thailand nor Nepal is in a position to reject a democratic dispensation, although it went against their well-being.

The new Thai draft statute proposes to increase the proportional representation in the parliament but decrease the number chosen by district elections and limit the number of proportional seats that can be awarded to a single party. It is intended to increase the representation of medium-size parties and virtually assure that no party wins a majority or governs without forming a coalition. It is envisaged as an attempt to control and regulate politicians. So how does the Thai army maneuver to control future governments? It is through the upper house called the Senate, which will be filled by military nominees.

They will be eligible to participate in the selection of the prime minister along with the lower elected body. The bottom line is that no party or leader will ever be powerful without the support of the army. Is it not too tantalizing and educative for Nepal Army to carry out a serious study of the Thai system of governance in the wake of the uncertainty of the constitution implementation  and the foreboding thoughts of vacuum post Magh 7, 2074 BS, the constitutional deadline for three sets of elections? Just a thought.

Don't be cynical about love

VENICE, A fairy tale in which a mute cleaner in a government laboratory falls in love with an aquatic creature facing... Read More...

If girls go through different set of challenges then it becomes a different race. Let’s bring this generation to compete... Read More...