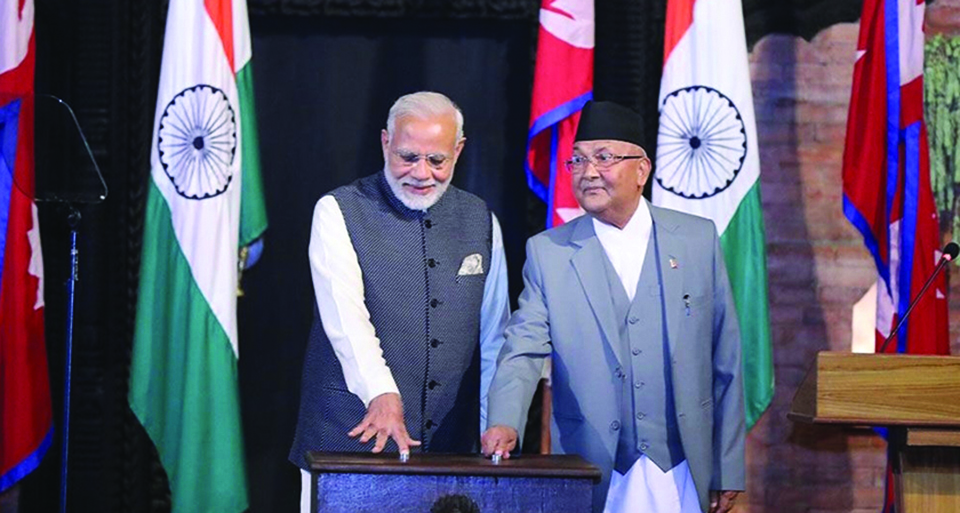 If Modi could scratch Oli’s back, so did Oli on Modi’s back. This is a diplomatic gamble of two powerful personalities of Nepal and India

Indian Prime Minister Narendra Modi came to Nepal on a third visit on May 11 with a new diplomatic gamble. There were more incredulous surprises in this trip than ever heard in our land. Thanks to the network development in international communication, he targeted the Hindu electoral constituency in Karnataka, a central state in India, then voting for its state assembly.

By worshipping and prostrating before Goddess Janaki in Janakpur, God Muktinath in Mustang district and Lord Pashupatinath in Kathmandu, he helped his BJP to emerge as the biggest party in the hustling. He was even censured by the opposition for alleged violation of the election code as it coincided with the silent hours, proceeding the polling day. Modi is facing general election next year and wants to prop up his image by improving India’s relations with its neighbors. The Nepal visit is considered as an outcome of this political strategy.

What is more incredulous is the fact that Prime Minister KP Sharma Oli obliged his Indian guest on this mission to fulfill his objectives. He played as a great host to a religious pilgrim by donning a yellow robe to match his guest’s outfit and spiritual mood of the occasion at the Janaki temple. At the official talks subsequently held in Kathmandu he played the national agenda at a low key note to embarrass his visitor, who had his electoral stakes in India in mind. However, he did not miss to tell his audience in Nepal that he raised all matters of concern to the people of Nepal. The outcome however remained nebulous and far-fetched.

Still more disbelieving is the doubt cast on his nationalistic character. Oli acted as a good host as a quid pro quo to Modi for what he did to catapult Oli to the height of popularity. Modi took the risks of imposing economic blockade on Nepal in 2015 with the intention of, inter alia, promoting Oli. Since Oli as the then Prime Minister resisted the Indian pressure on constitutional issues, he succeeded, as premeditated, in bagging biggest support in Nepal paving the way for his second stint. If Modi could scratch Oli’s back, so did Oli on Modi’s back. This is a diplomatic gamble of two powerful personalities of Nepal and India unfolding as testified by the third Nepal visit.

One may recall the events in Sikkim in the lead up to its merger with India. Before merging with India, Lendup Dorje was immensely helped by India to build up his image as a democrat and liberator. Once he attained his political clout with overwhelming support in the national assembly, he passed the resolution to merge with India.

In our case, it was dubious why the government announced the termination of the direct assistance from the embassies to any Nepali organization. However, 24 hours after such a firm resolution, the new government headed by Oli knelt down by granting an exception to the Indian embassy, which tops the list to extend up to Rs 50 million to any agency, organization or entity in Nepal on its discretion. It was astounding to know that the amount so donated would be included in the official budget of the government. It implies that the Indian embassy in Kathmandu enjoys the role of one of the implementation agencies of the financial outlays of the government.

Equally questionable is the provision of developing waterway connectivity with India, as announced in the joint communiqué issued during Oli’s visit to India in April. First, he had specifically made it clear prior to this visit that he would not enter into any fresh agreement with India, which he did. Second, a waterway is not in the immediate priority for Nepal. Third, a waterway demands regular supply of water in the river, which is possible only after building high dams in the mountains of Nepal. At a time when the Koshi high dam is facing widespread criticism in Nepal, it is difficult to digest how a nationalist leader, as Oli is dubbed, could accept a proposition designed to cover up the real intention underlying it.

The same logic applies to the agreement relating to railway connection up to Kathmandu. Oli had never spelt out its possibility in any of his public utterances before he made a surprise commitment to it. Indian railway is a counter to Chinese railway that he adeptly sold as a dream to the Nepali voters. Not that the Indian railway connection is bad in itself, but it is feared to sideline the fast track Nepal decided to build on its own within a couple of years, not to speak of undermining the much-anticipated Chinese railway connection. What was inconceivable is exposition of our leader who controls the reign of government breaking his own words of promise to the people. These are some of the evidences that stand to uphold Prime Minister Oli acting on a new diplomatic gamble by taking the Nepali people for a ride.

KATHMANDU, July 4: Apart from pledges to make available Rs 1 million in compensation for each of the families of... Read More...

In his written response to SC, Dahal says courts can never be influenced by rallies, slogans and speeches
4 hours ago