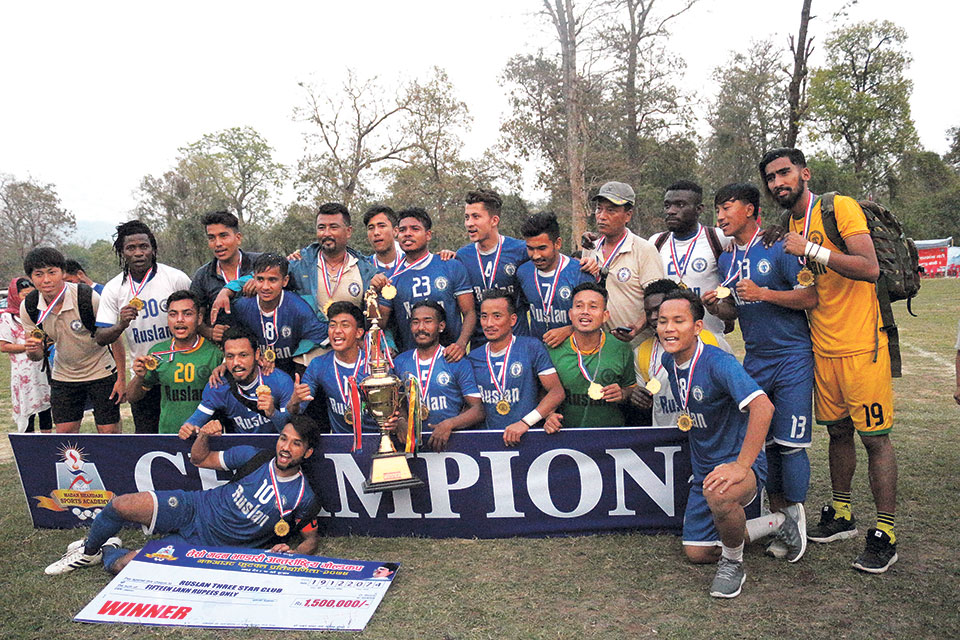 Manang had taken the lead in the second minute of the match, only to see Three Star’s Ananta Tamang score in the 69th minute utilizing a pass from Peter. In an evenly-contested match, African player Ajayi Martin scored the winner in the 82nd minute to give Three Star the win.

Despite playing counter attacking football after conceding the second goal, Manang could not break its opponents’ defense line and couldn’t stop Three Star from lifting its fourth title of the season.

“We participated in nine tournaments, we reached the final in seven and won four of them,’’ Three Star head coach Megh Raj KC said. “The match between two big clubs was really entertaining and my boys really played in a situation when we were a goal down. So, the win came because of that.’’

KC further added that his team had some complaints in playing the final because the organizers neglected the FIFA rule and “made us play just a day after playing the semifinals.”

But, he said the organizers admitted mistakes on their part and requested Three Star to play the final that convinced the club to play on Monday. “Finally we won,’’ he said. With the win, Three Star took home Rs 1.5 million, while the runner-up Manang was rewarded with Rs 750,000. Man-of-the-match Tamang received Rs 10,000.

Manang’s Anjan Bista was named the best player of the tournament and he got Rs 50,000. He also won the highest goal scorer award and received an additional Rs 15,000.

Madan Bhandari Sports Academy’s Binayak Shrestha was named the best goalkeeper. Likewise, Three Star’s Peter, Martin, Nirajan Khadka and KC were prized with the best defender, the best forward, the best midfielder and the best coach awards respectively. The host Madan Bhandari was prized with the fair play award. All the winners got Rs 15,000  The semifinalists of the tournament pursed Rs 50,000.