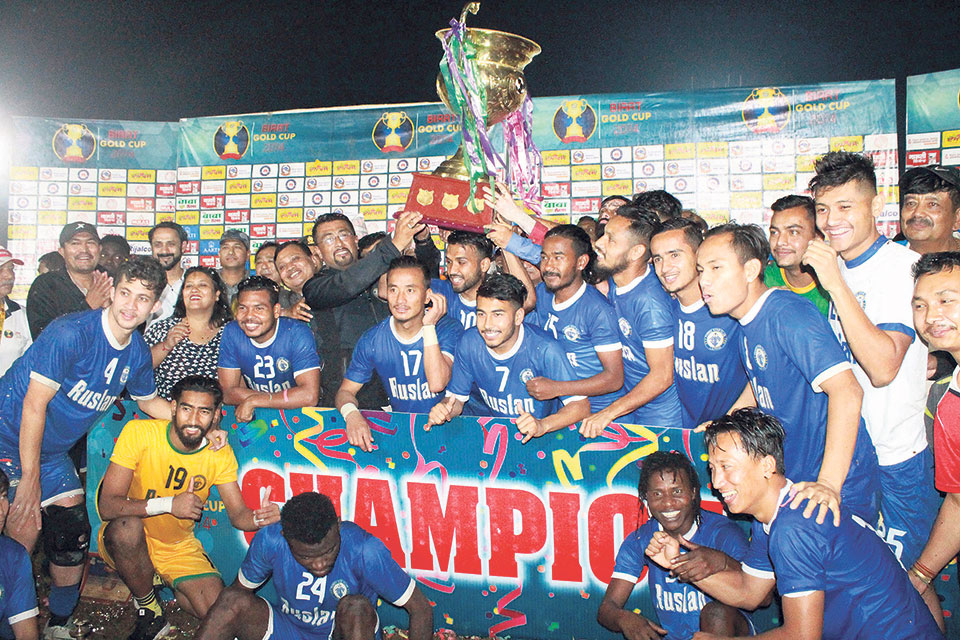 Members of Three Star Club pose with the trophy after winning the Birat Gold Cup football tournament title at the Shahid Stadium in Morang on Monday.

At the Shahid Stadium, the game looked set to go to the extra time, but a goal from Ananta Tamang when he headed the ball into the net from a Sunil Bal corner in the 56th minute helped Three Star get the all-important lead. Bimal Gharti Magar scored a brace in the final 15 minutes of the match. Magar first scored from the spot kick in the 76th minute giving Three Star a 2-0 lead. He got his second in the 89th minute helping Three Star make 3-0 to lift the title.

Both the teams got plenty of good chances in the match among which the first fell to Three Star, but the national team striker could not capitalize it. Army got a chance after two minutes, but a poor free kick from George Prince Karki could not prove fruitful. Karki got another free kick just a minute after that, but that was not useful as well.

Army was pressing Three Star in the opening 15 minutes, but Three Star got a good chance despite that in the 21st minute when a slick passing football from Rupesh KC to Buddha Chemjong saw an Army player get injured when Magar hit the shot.

Army got another chance in the 35th minute, but Tanka Basnet could not utilize it in front of the goal. Five minutes were added at the end of the first half, but that ended without a goal.
Three Star looked a bit more confident in the second half with the possession and passing and they were awarded a corner in the 48th minute. Nirajan Khadka curled the ball, but Ajayi Martins could not head the ball into the frame of the goal. Scorer Tamang got another free kick in the 51st minute, but it was an easy play for Army.

Even after scoring the first goal, Three Star looked hungry for more. Magar’s left footed shot was well saved by Army goalkeeper Bikesh Kuthu in the 69th minute. Kuthu again saved another shot from Martins in the 71st minute.

Three Star was rewarded a penalty in the 76th minute after Martins was fouled inside the box and the penalty was converted by Magar for the second goal. And, with the third goal going in for Three Star, the game was well and truly over for Army.

With the title win, Three Star has clinched its fifth title this season. Earlier, they won the Itahari Gold Cup, the Budha Subba Gold Cup, the Tilotama Gold Cup and the Madan Bhandari Gold Cup.
Three Star took home Rs 1.27 million with the win, while the runner-up Army was prized with Rs 551,000.

Three Star’s Tamang was named the most valuable player of the tournament and was rewarded with a motorbike. Magar, who scored four goals in the tournament, also got the highest goal scorer award, while Nepal Police Club received the fair play award.

Revenue mobilization off the mark: Finance Minister Poudel
15 minutes ago

NC-proposed candidate must be made new President: Sharma
34 minutes ago

Why was the University Bill introduced, leaving aside the Education Bill?
54 minutes ago