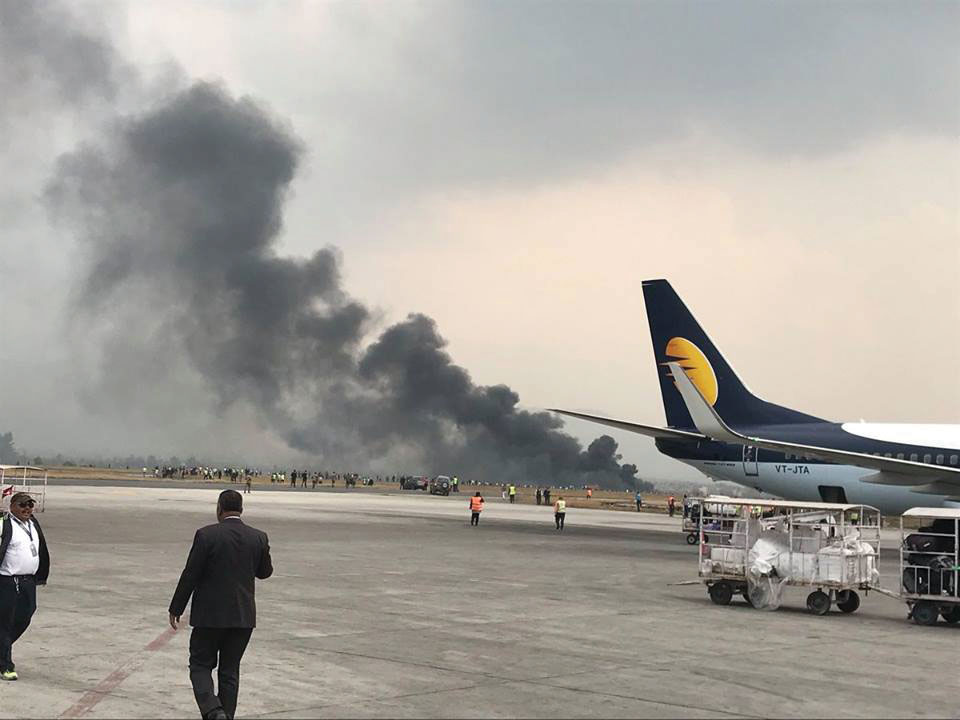 Why was aircraft not told firmly to make a missed approach rather than letting it hold dangerously at very low altitude?

Following an inordinately long exposure on confusion related to 02/20 runway classification, readers are in all probability, familiar with its essence. Most may still wonder why wind directions are expressed in three digits, not in twos. I had my own share of embarrassment for implying tailwind was good for landings on 02. All big aircraft land from 02 here even under unfavourable wind condition due to TIA’s various operational compulsions. Harping blindly about theoretical suitability of RWY20, for the ill fated flight (BS211) that day, as if the ATCs did not know this, is ridiculous.
It is established that misunderstandings can, at times, lead to unsavoury outcomes. As such, it gets extremely hazardous because of the inherent dynamics of flying and traffic in the vicinity. For this piece, I have dug out interesting runway related facts from elsewhere and some basic dos and don’ts on manner related to air-ground communication.

Runway confusion
Runways can be crisscrossing and even be parallel. Singapore will have third parallel runways (left, right and centre) by 2020. It has two now. Parallel runways come with an additional alphabet tagged so as to distinguish one from the other. Clinging on to the practiced norm, most of us laughed at off-the-cuff suggestion to change runway numbering here.

It was surprising to learn that Europe and Australia have adopted ways to do away with confusing numbers. In all, there are 18 pairs of runway numbering starting from 01/19 to 18/36. But among pairs only two are considered confusing. The first set is obviously 02/20 the other being 13/31. But why do runways continue to be marked with such numbers? Kathmandu is not alone in that respect. Changi (Singapore) has three 02/20s while JFK airport (New York) has a parallel set with 13/31 while LaGuardia (New York) has two runways at right angles (4/22 and 13/31). It had gone unnoticed that the US has done away with the preceding zero since very long: 4/22 there would be 04/22 elsewhere.

Contrary to our belief the magnetic north is not stable as it shifts a bit each year. These annual changes are small, but Brussels airport notation was changed in September 2013 when it reached a point when 01/19 became more scientific than 02/20. This issue is more prevalent in countries at higher latitudes than tropics.

Talking about confusion, use of certain words or ways numbers are said or commands articulated in air-ground (A/G) communication are extremely important. The fault, either in delivery or in read back, may not be as noticeable for non professionals. The following extract from pilot’s own write up should make it amply clear. “I was given the clearance “descend now FL240” once and I read back “descend now 240”.

Immediately I was asked by an alert ATC to confirm Flight Level 240 again, which at the time I was convinced I already had. But my read back could have sounded like “descend to 40” instead of “240” implying a mighty big deviation that would have created a horrendous confusion if not timely caught. I used to fly with an older man from old school who said that “the words TO and FOR should never be used in communicating between A/G.

ATCs also have their share of using unwarranted shortcuts. In ATC’s own words, “I once cleared an aircraft “turn left three-one-zero” against the correct: “turn left heading three-one-zero.” The pilot read back: “Roger, three-one-zero” . . . and started a climb to FL310 (meaning 31,000 ft). There’s no substitute for proper phraseology as “shortcuts” can be dangerous.

TIA tragedy
What happened at TIA on 12 March with regard to flight BS211 was extremely tragic as misunderstanding was left un-tackled. Experts have suspected it as a problem of the mind processing what it expects to hear rather than what it is actually hearing. Captain Abid Sultan had long experience flying in and out of Kathmandu and would have used 02 most of the time for landings. To assume he took it as ‘20’ “subconsciously” is bit unpalatable. Hopefully, the accident investigating team will make thorough examinations of all audio, video and material evidences and come up with impartial and far reaching recommendations.

It is the captain’s responsibility to see that passengers are delivered safely to the ground but the role of ATC is considerably greater for being in control of many flights and souls there. They need to deal not just strictly but quickly with any kind of dithering. ATC tried to be accommodating than play by the book on that occasion. Why was aircraft not told firmly to make a missed approach rather than letting it hold dangerously at very low altitude?

I sense this lack of assertiveness will have a more serious consequence given EASA’s (European Aviation Safety Agency) continuing safety concern with all things related to Nepal aviation. This certainly does not bode well, the prospect of getting out of the infamous safety tag looks even grimmer after this accident. As for the runway number, I feel we should simply drop the zero off “02” as they do in the US. Yes, it looks little odd, but this should, at the very least, help defang the inherent confusion.

Experts stress on providing clean cooking solution for all

KATHMANDU, Nov 4: Experts have underlined the need of increasing the use of clean and sustainable energy while reducing the... Read More...

At War With a Virus
1 day ago

Lockdown leaves some dairy farmers without fodder
23 hours ago

Govt struggling with recovery strategy amid looming uncertainties
1 hour ago

Australia's tour of Bangladesh postponed due to coronavirus
14 hours ago

IN PICS: Rhododendron forest remains silent amid COVID-19 lockdown in Panchthar
15 hours ago