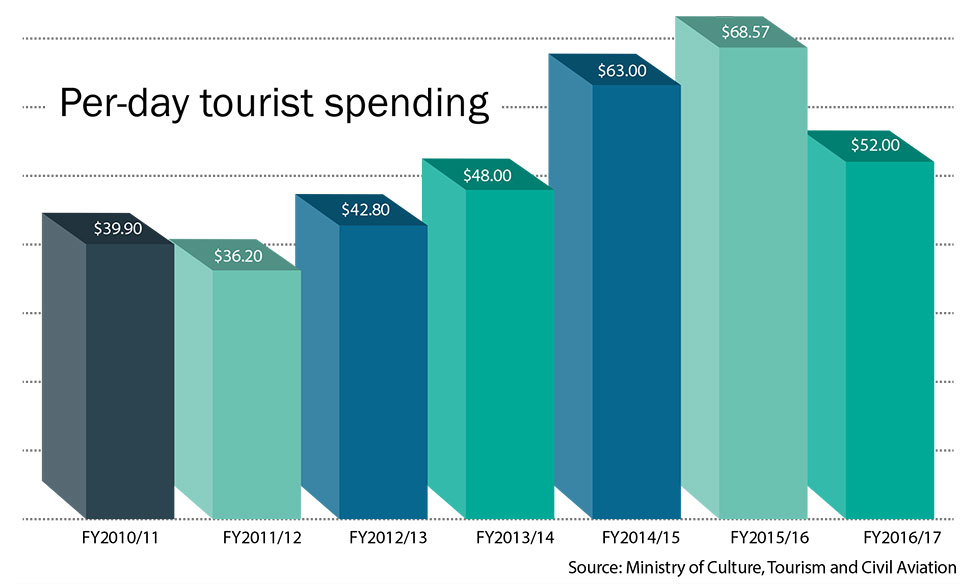 Say focus should be on increasing tourist spending not footfalls

KATHMANDU, Mar 12: Both the government and the private sector are putting high emphasis on increasing tourist footfalls to Nepal in recent years. Though the number of tourists is increasing, their spending has not increased as desired.

The year 2017 is considered a successful year for the tourism industry as the country received a record tourist arrival during the year. Nepal welcomed 940,218 foreign tourists in 2017. But tourism entrepreneurs say that the country has infrastructure to host five million tourists annually.

Unhealthy competition among tourism entrepreneurs and relatively less focus on high-end market are the reasons behind low per day spending of tourists, stakeholders say.
According to Hotel Association Nepal (HAN), the major indicator of per day tourist spending is taxable services which are directly linked to the country's economy.  “It is a bitter fact that we are not receiving spendthrift tourists much. Most of the tourists that we are getting are backpackers who spend very less,” Binayak Shah, general secretary of HAN, said. According to Shah, lack of promotion and strategies on high-end marketing is hindering efforts to bring high spending tourists.

“There are tourists who love to loosen their purse strings. But we are failing to attract them in big numbers. We do not have many options for them, Shah said, emphasizing the need to launch digital marketing campaign to tap the high-end market to bring more spendthrift tourists. “We are finally getting stability after many years of unstable political situation.  Hopefully, it will give a shot in the arm for the tourism sector.”

Sunil Shakya, president of Pacific Asia Travel Association (PATA) Nepal Chapter, said that tourist spending is not rising due to cut-throat competition among hotels. "We have more supply and less demand. This gives tourists many options, and they will certainly choose the cheapest one," Shakya told Republica.

Hotel rooms, which used to cost $200 per night few years ago, is now available for around $60, he added. “Nepal is counted among the cheapest countries for tourists in the world. It is not good for our industry,” he said, stressing the need to regulate the prices.

KATHMANDU, Jan 16: Ministry of State for Industry, Kanchan Chandra Bade, has said that the government was committed to support women... Read More...