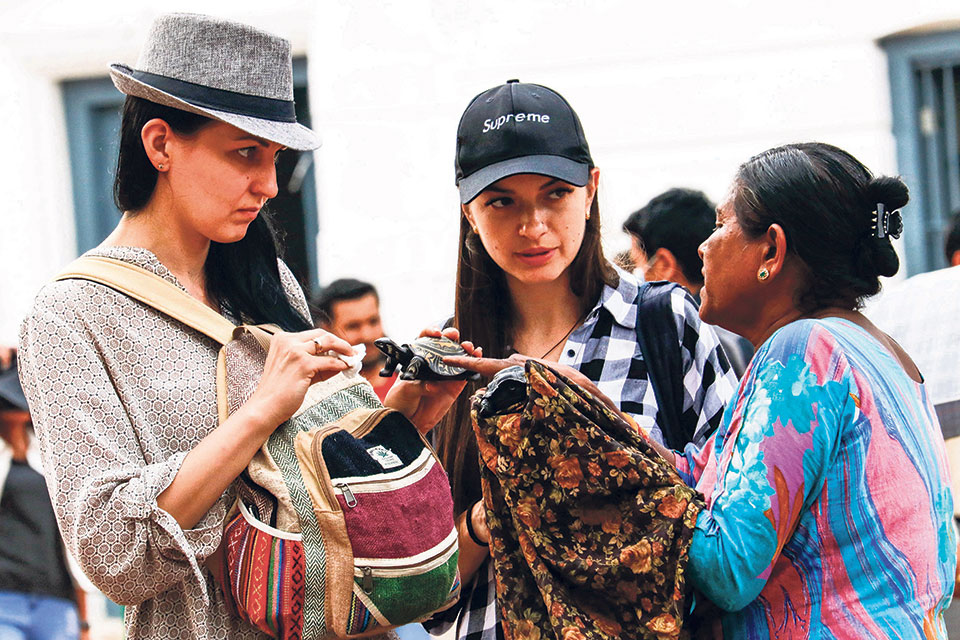 KATHMANDU, Aug 18: Tourist arrivals in 2018 has continued to break the old records of the country. Recording a remarkable growth of 18 percent in the first seven month of 2018, tourist arrival reached 593,299, according to a report compiled by Nepal Tourism Board (NTB). The number was 502,544 in the corresponding period of 2017.

Even the figure of the first half of 2018 -- 520,014 -- is higher than the first seven months of 2017.
While 153,379 tourists from countries of South Asian Association for Regional Cooperation (SAARC) visited Nepal till July this year, 164,117 arrived from other Asian countries.

A total of 114,757 Indian tourists, the largest market of Nepal, arrived in Nepal till July this year. Likewise, 84,502 tourists arrived in the country till July from the second largest market, China. Likewise, the country welcomed 50,773 from the United States of America and 20,347 from Sri Lanka during the period.
Tourist arrivals from India grew by 80.4 percent in July in comparison to the same month of 2017, while the number of Chinese tourists grew by 125.4 percent in that month. The numbers from India and China were 18,385 and 13,123, respectively.

Likewise, 6,957 tourists from the US visited Nepal in July, whereas 1,457 Sri Lankan tourists visited Nepal. Although the lack of infrastructure has been taken as a major barrier for tourists to choose Nepal as a travel destination, number of tourists is growing.

NTB has stated that the increasing focus of both the board and other travel-trade agencies to conduct travel-trade activities, destination promotion, travel marts, sales missions, business to business (B2B), and business to consumers (B2C) promotions are the major reasons behind the rapid growth of tourists in 2018.
Despite the growth in numbers, Nepal is yet to receive high-end tourists as per the tourism entrepreneurs. The average length of tourist's stay in Nepal is 12 days, while the average daily expense per visitor per day is US$ 54 only.

Tourism entrepreneurs say that due to lapses in policymaking, the country has been unable to attract high-end tourists. "Our major problem is the tedious government process in almost every development project. They are so slow and lengthy. This is pulling back the entire tourism industry," said Amar Man Shakya, president of Hotel Association Nepal.

"Nepal has so many things to sell to high-end tourists. But poor government management has resulted in poor infrastructure. This has been a major barrier to attract high-end tourist," Shakya added.

"There is no point being happy for the growth in 2018, because the real tourists who buy our products are still waiting for the country to improve," he told Republica. "It might be hard to achieve the target of Visit Nepal Year 2020 if the pace of building infrastructure remains as slow as it is now. Currently, the hotels around the country have a capacity of providing accommodation to around 2.4 million tourists."
On the other hand, fewer trekkers have arrived in the country this monsoon season compared to the monsoon past year.

"This year we have received fewer trekker compared with previous years," Navaraj Dahal, president of Trekking Agencies' Association of Nepal (TAAN) said. "Infrastructure has not been improved. It is not helpful for tourism."

"Indeed it is good news that tourist arrival is going up every passing month this year, but the result is still not satisfying," he said, adding: “To some extent, tourism campaigns and promotional activities have accelerated the tourist arrival. But it is also true that we are serving less than our capacity."

Tourist arrival up by 12.5 % in first six months this year

KATHMANDU, June 21: The Department of Immigration says a total of 68,825 international tourists visited Nepal in May 2018, with... Read More...