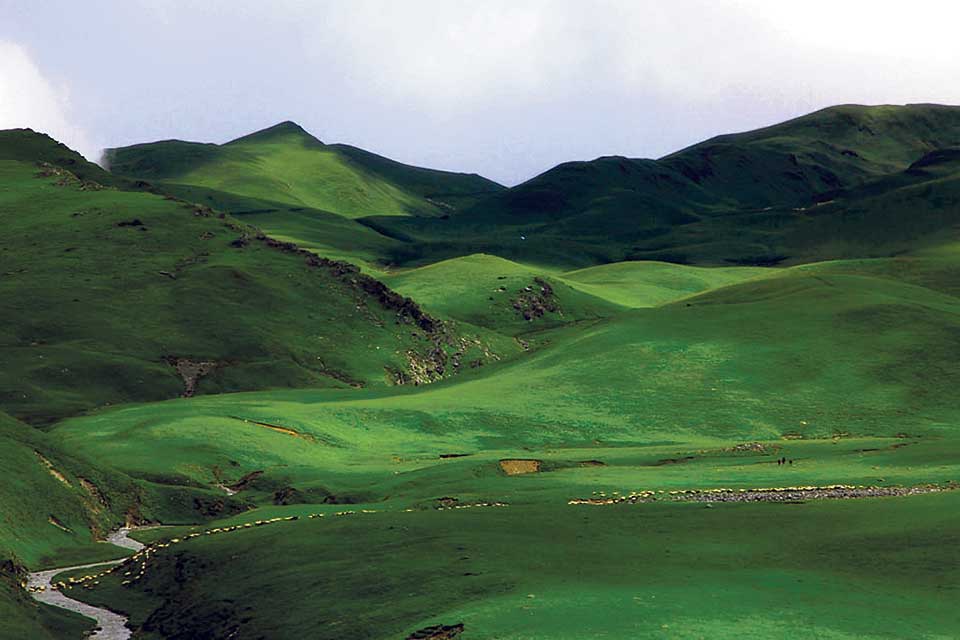 This undated photo provided by Trekking Agencies’ Association of Nepal shows sheep being herded down a trail to Badi Malika in Bajura. Badi Malika was one of the 97 locations selected by the Ministry of Culture, Tourism, and Civil Aviation for development and promotion as a new destination for tourists. Photo: Trekking Agencies’ Association of Nepal Handout/Republica

KATHMANDU, Nov 2: The government has come up with a list of 97 tourist destinations in the country as part of its efforts to diversify tourism market within the country.

The new destinations identified through the minister-level decision by Ministry of Culture, Tourism and Civil Aviation was made public on Thursday.

The move to develop new tourist destinations coincides with the preparation to celebrate Visit Nepal Year 2020 with a target to bring over 2 million international tourists.

“The identification of new tourist spots will help to diversify our destination and tourism market, while involve local units for development of tourism market,” Ghanashyam Upadhyay, a joint secretary at the ministry, told Republica.

Through the budget of the current fiscal year, the government has announced a program to identify, develop and promote at least one hundred new tourist destinations across the country in partnership with provincial and local governments for tourism promotion.

According to Upadhyay, the ministry had received proposals from 619 destinations for designating them as tourism destinations. “We looked into various factors including tourism prospect, consulted study reports prepared by Nepal Tourism Board and sought views of experts to determine whether the tourism destination should be listed,” added Upadhyay, explaining the process of identifying 97 destinations.

These new tourism destinations will also receive budgets from the ministry to develop necessary infrastructure. The ministry has earmarked Rs 500 million in the budget for the purpose. Each destination will receive an average of Rs 5 million to build infrastructure, he added.

According to ministry officials, destinations which do not have master plan for tourism development will have to prepare master plan first.

“We know that the fund that we are giving is inadequate. But local governments can allocate more funds and also look for other resources,” added Upadhyay. The initiative of the ministry comes in the wake of complaints from provincial and local governments that many prospective tourist destinations have not got proper attention and promotion.

Can the contemporary ‘nearest' and ‘dearest' envoys, appointed under political game- ‘divide and rule’- present themselves ‘head to head', ‘neck... Read More...