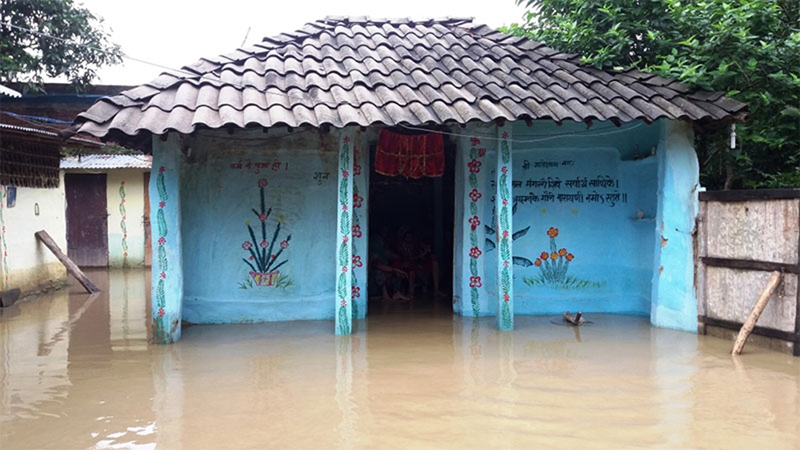 Some big thinker has said the Third World War will be over water (Was it Huntington?). Well, the world is already seeing increasing instances of conflict-like situations over water, whether it’s in the Nile, Mekong, Brahmaputra, Koshi, Karnali, Mahakali, Gandak, Arun, etc, in the wake of acute water shortage resulting from climate change and overuse of the precious resource on the part of mightier countries. Close to Tibet—a principal source of major river systems like the Koshi, Karnali, Indus and the Brahmaputra—countries are seething in anger against each other over water. The situation gets tense, especially during the rainy season when rivers turn into agents of destruction. Here are some of the highlights of the mini-war, from our backyard.

Your constituency, Sire?
There was a time when our rivers knew no boundaries. But contemporary reality is different. With Big Brother down south unilaterally building water regulating infrastructure along the border, including a chain dam, high-elevation roads, embankments and barrages in blatant violation of international practices, rivers originating in Nepal and Tibet are inundating huge swathes of our flatlands, while controlling floods, providing water for irrigation and drinking purposes, for fisheries and for other industrial purposes in Big Brother’s territories.

What’s more, these superstructures are clearly part of the Big Brother’s plan on interbasin transfer of water from ‘water-surplus areas’ to ‘water-deficient’ areas. The Chure, the source of seasonal rivers, is becoming increasingly fragile, thanks to deforestation, illegal mining and supply of construction materials like boulders and sand for construction of water-regulating structures close to and beyond the border.
In this context, our focus should be on reclaiming our water sovereignty in light of the fact that the controversial Koshi Agreement, the Gandak Agreement and the Mahakali Treaty (Agreement) have limited it severely. But our government is unaware of this dire situation, it appears. That’s why it is bent on expediting the export-oriented, high dam-based Arun III project, which is likely to bring environmental catastrophe to Eastern Nepal and deny it much-needed water for irrigation, and serve the populations in Bihar.

As in previous years, with its key firmly in Big Brother’s hands, the Koshi Barrage created havoc in Nepali territories, as it did in neighboring Indian territories. This time, we read remarks that the Koshi caused such havoc because down south in Kunauli, India was building some structure to channel the river. During talks with locals in course of his trip to parts of the East about two months ago, yours truly had also heard about such a structure. While visiting the Koshi Barrage for about two hours and interacting with local people, yours truly found how the monstrous structure had inundated huge swathes of Nepali territories for the benefit of Bihar.

As flood fury worsened this rainy season, there was even talk of opening all of its 56 floodgates and draining floodwaters. At one point, the Big Brother’s representative in Nepal even said India was ‘positive’ about opening the floodgates.

Then and there, a government minister spiked the idea, pointing that this move will create havoc across the southern border. This has given rise to numerous questions. Questions like: Is this minister our very own minister or some anonymous, self-appointed spokesperson for the Ministry of Micromanagement? If he indeed represents our country, why doesn’t he speak about protecting our territories from the nature’s fury, compounded by big brotherly designs to protect its farms and settlements? Why doesn’t he talk about seeking compensation for an unfair agreement that the Big Brother had forced a tyrannical regime to sign? Why doesn’t he talk about the near invasion of Nepali territories close to the barrage?

Is it because the self-appointed spokesperson for the Ministry of Micromanagement thinks the Big Brother is incapable of defending its interest in its ‘backyard’?

Against nascent federalism
As if exploiting the Koshi to the hilt by building a barrage in Nepal and permanently inundating huge swathes of its territories were not enough, the Big Brother is planning to build a high-dam based Arun III project in eastern hills. Apparently, the project will be part of the river-linking project that will transfer water from water-surplus areas to water-deficit areas, giving agriculture, fisheries and other aspects of life a boost. But what do we get from such a grand project? Next to nothing.

On the other hand, the costs are prohibitively high. The project will displace thousands of people and deny our southern plains water for irrigation, drinking, navigation and fisheries. A federal Nepal is likely to see increasing conflicts between states over vital natural resources like rivers and forests. Our water crisis will aggravate further. With our lifelines in foreign hands, how will our federal states survive and prosper? Our political leadership should explain this to the people.

This low cunning
Closer home, when a territorial dispute between two giants and a small neighbor was at its peak, our Big Brother’s ‘free media’ reported that its Bigger Brother had built a huge dam (installed capacity 38,000 MW) to generate hydroelectricity from one of the tributaries of Yarlung Tsangpo (known as Brahmaputra in parts of South Asia), causing flooding and deaths in Assam. Reports further pointed that the Bigger Brother, unlike in previous years, had not provided the Big Brother with hydrological data related to the river, arguing further that, in the event of a war, the Bigger Brother could use this dam as a water bomb against the Big Brother.

We are indeed familiar with similar low cunning on the part of our Big Brother. Every year, our rivers create havoc on our flatlands with increasing ferocity after hitting upon demonic water-regulating structures built unilaterally by the world’s largest demon-cracy along no-man’s land in blatant violation of international norms and practices to obstruct the natural flow of rivers, causing loss of lives, loss of property worth trillions of rupees and displacing hundreds of thousands of people. South Asia will indeed be more liveable if the Big Bro practices what it preaches.

Unequal ties
In the wake of the flood fury, the Bigger Brother offered us aid. Then came the turn of the Big Brother. The monsoon havoc resulting from superstructures close to the no-man’s land had caused loss of life and damaged fisheries, physical infrastructure, private property and standing crops worth trillions of rupees. Our government did not have the courage to seek compensation for this loss, but the Big Brother had the audacity to offer us 25 crore bucks for the monumental loss!

Our democratic regime ate the humble pie and accepted the amount without any shame.
The 25 crore aid episode is a glaring example of how unequal our ties with the Big Brother are. It shows while we make contributions worth trillions of rupees (have we ever bothered to calculate the cost of regulated water that flows across the border?), we get next to nothing in return. We are a proud nation. If we can’t make a living at home, we head abroad and work hard to make a living but we don’t beg and we don’t need your 25 crores. Big Brother, you can distribute this money among farmers that are committing suicide due to crop failure and other disadvantaged sections of your society.

Living so far from God and so close to an inconsiderate Big Brother, who doesn’t believe in sovereign equality, we pray: Please give us the strength to live with our heads held high even during the most difficult times.

With the leftist in the government for five years, there may not be a better time to improve bilateral ties... Read More...