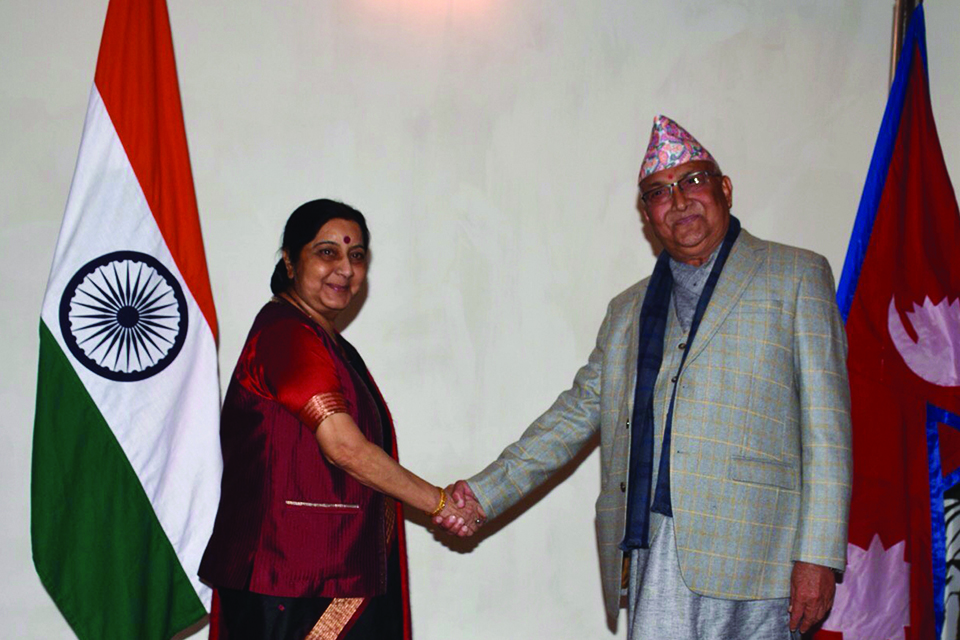 With the leftist in the government for five years, there may not be a better time to improve bilateral ties with China.

Few months ago, I had flown back home via Delhi. The immigration officer at Delhi airport greeted me: “Morning, how are you, SIR?” I had barely handed him my passport, when he asserted, kitne din thehera TU? (Domineering version of how long was your stay?). His change in tone and disposition was reminiscent of my early schooling days in India where I had to constantly fight off bullies. I had had to resist claims not just from Indian students, but alarmingly from Indian teachers that Nepal was virtually an Indian adjunct.

Some might think I’m reading too much into one official’s assertion, but I’m not. India’s ‘big-brother’ attitude has gotten coarser since my schooling days to hitherto, ascending through false consciousness on Indian bureaucracy and culture. September 19, 2015 provides perhaps the bitterest instance of the big-brother approach in modern-day Nepal-India relationship. Prime Minister Narendra Modi had sent his envoy to Kathmandu to express dissatisfaction over Nepal’s constitution. The Indian PM recently sent his External Affairs Minister in order to apparently improve ties between the two countries. It’s imperative to understand that India’s ‘double-think’ act of repudiating one time and cajoling the other has played out numerous times before. Hence, too much mustn’t be made of the Minister’s visit.

The post Second World War period witnessed ‘economics’ supersede ‘wars’ and become the engine of hegemony. Land-grabbing, acquiring large-scale land by foreign investors, is one of the insidious mechanisms employed by governments and corporate giants to hegemonize. The latest Land Matrix data indicate that Indian companies have globally acquired more than three million hectares through long-term lease or ownership with Africa accounting for almost 80 percent. India has been following in the footsteps of the UK, the US and Germany, whose history is tainted by brutality of colonialism.

While India has only begun to exercise its influence elsewhere, it has long maintained a nearly absolute domination in South Asia. It wouldn’t be too wrong to argue that India’s foreign policy towards its regional counterparts is still influenced by colonial attitude and institutions. As far as Nepal is concerned, the 1950s marked the dawning of India’s big-brother attitude—a sense of self-righteousness and pride pervaded India owing to its contribution towards Nepal’s democracy movement.

The Orwellian concept of big-brother was conceived to embody a totalitarian state in the famous novel. Would it be erroneous to portray India as a totalitarian state? Especially when it has encroached some 70,000 hectares of Nepal’s territory? Of late, there were claims that India had trespassed territory in Birgunj and Kanchanpur while erecting new border pillars. It’s surprising that the Indian Minister wasn’t quizzed on it. Rather, her arrival added to the already divisive socio-political culture of Nepal.

Nepal maybe more divided now than ever, but so are most countries—politics, religion, and economics among others can be faulted. Since the emergence of Nepal as a nation-state under the tutelage of Prithvi Narayan Shah, the ‘Khas’ have used political power to exclude others from socio-economic rights. Almost a quarter-century later and promulgation of ‘People’s Constitution’, the country remains divided into two—those who supported the constitution and those who opposed it or (loosely) the Madhesis and Pahadis.

When KP Oli met with the Indian Minister, series of insults were directed at him by the opposition. Nepali Congress’s spokesperson likened him to a ‘Chameleon’, as in who changes his opinions, demeanor, or appearance as per the situation. Wasn’t the NC spokesperson one of the ‘seven brothers’ of the new wave of Nepali Congress that was very critical of the party’s leadership and also would allegedly bring much-needed reform?

And did he not simply pucker up to his party president, when offered the spokesperson post? The plot of Indian Minister’s visit was dubbed as strengthening ties and aiding development, but perhaps she returned back seeing some of the sub-plots unfold.
It’s pitiful that the parties can’t internally unite in a concerted effort to resist an external force. However, resisting the southern neighbor is akin to a double edge-sword for Nepal. The last time we resisted, we paid a heavy price. The embargo didn’t birth the Madhesi versus Pahadi perception, though it added fuel to the fire. With the leftist in the government for five years, there may not be a better time to improve bilateral ties with China.

The development endeavors the Indian Minister promised is surely going to be accompanied by numerous unequal treaties like the one of 1950. The more we depend on India, the more we are exposing ourselves to be held ransom by them. Prior to the embargo in 1989, Nepal was one of the most thriving economies in Asia. After the blockade, Nepal’s growth declined rapidly and found itself in the league of world’s poorest nations. The 2015 embargo, which was the fourth since the first in 1960, battered Nepal’s economy prompting negative growth in more than 33 years.

There are valuable lessons to be learned. First, given India’s regional power, it will go as far as violating international laws to reprimand Nepal and therefore there is no guarantee that India won’t impose the blockade again. Second, Nepal is all alone when it comes to mitigating the consequences of the blockades. Chinese President Xi Jinping condemned India’s action by stating bigger nations shouldn’t bully smaller ones during his address to the UN. Many suggest that we should look towards the northern neighbor to quantify our economy with some even advocating ‘pegging’ Nepali Rupee to Yuan. That is not the solution. Rather, our policies should target balanced ties with both the neighbors. Nonetheless, China’s development can serve as a model for us.

Nepal’s first Special Economic Zone (SEZ) in Bhairahawa is in dire condition. The government plans to open 14 more SEZs. While SEZs have been most successful in attracting foreign capital, especially in China, Nepal may not yet be ready for SEZ, when one considers it took 11 years and comfortably more than half a billion to construct. Wouldn’t it be appropriate for Nepal to come up with a blueprint for economic reform with agricultural policy as a centerpiece? The same policy that engineered the post-Mao economic boom in the 1980s China, which enabled it to set up special economic zones; even as far as declaring an entire province of Hainan to be an SEZ?

One of my best childhood days was when my parents decided to school me in Kathmandu. My voice was finally heard. But what about the voices of millions of Nepali working in India who are heckled every day and the families in Chhapkaiya, Birgung whose 50 bighas land were encroached? That may only be eight hectares, but for a family surviving on less than US $ 2 a day, and with less than two hectares land, that’s their livelihood, just like the families in Africa.

Nepal is a sovereign country and we are sovereign people because we have land. The land may be small, but it’s home to around 30 million Nepalis. Our land is our mother in that it gives us life, and rests us when we die. We need to work towards preserving our mother and small measures like helping the families in Chhapkaiya can be a start.

Is this government minister our very own minister or some anonymous, self-appointed spokesperson for the Ministry of Micromanagement? ... Read More...