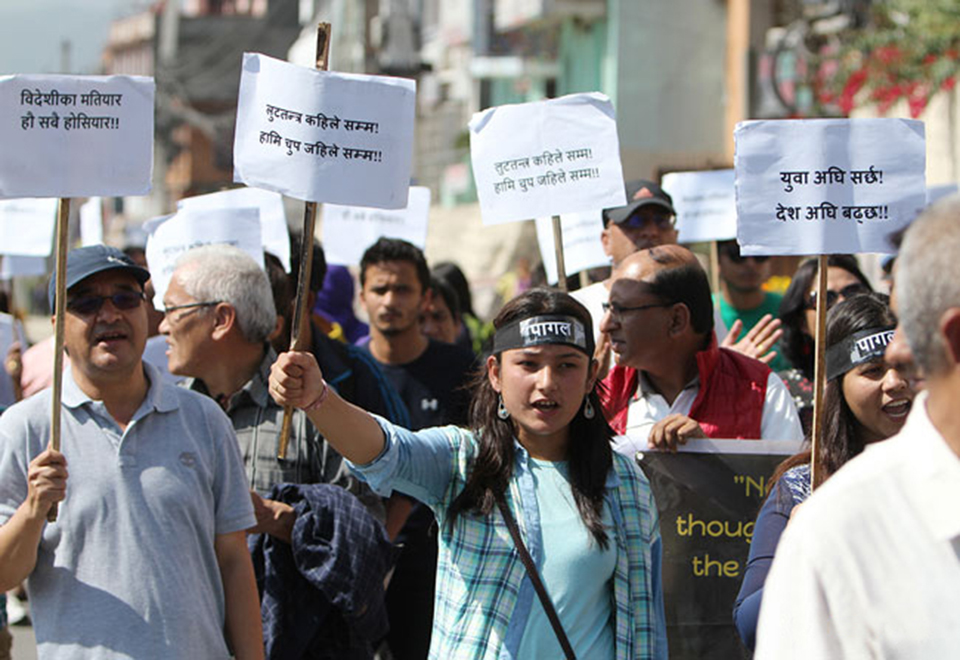 We need another non-violent revolution to establish rule of law and make corrupt politicians accountable for their dirty actions.

I was 10 when I first participated in a struggle for democracy. The wave of democratic movement of 1990 was powerful enough to ignite the collective imagination, of children to elderly, women to adults. I still remember as if it was yesterday that I chanted, “We want democracy”, “Go down, panchayat”, “Autocracy, bye bye, democracy wow wow”. The word “democracy” was instilled in our imagination as the silver bullet to overcome all our social evils.
But the political leaders later started using the new system to enrich themselves and their near and dear ones. Their excesses have now crossed all limits and time has come for us, the young generation, to launch a new revolution to put an end to loottantra and mafiatntra for good.

I used to talk to my friends about what would happen when democracy came to Nepal: Transformation of our society, economy, infrastructure and more, would be the collective answer. I was also curious about what would happen to my own status, childhood friends, my family, village, school, health post and roads in the democratic age. I often asked my father about the changes that we would have under democracy.

My father, a school teacher, used to tell me, “We will have freedom of speech, everyone will be equal before the law, there will be less hardship and more opportunity for everyone, the status of health and education will be greatly improved, we will have good roads, railways and cable cars”. My father gave me an evergreen example: Nepal would soon be like Switzerland. I believe anyone of my generation can relate to the way my father informed me about democracy.

In the night of April 8, 1990, at 11pm, the then King Birendra Bir Bikram Shah addressed the nation and proclaimed multi-party democracy in Nepal. There was no mobile phone and television in our villages at the time. I think there were no more than two/three radios in my village of nearly 60 households. However, the news spread rapidly. No villager slept that night. A victory rally was organized the following day. Thousands reached district headquarters to celebrate the dawn of democracy. In a few days, I heard speeches of Congress and Communist leaders that promised to make Nepal another Switzerland or Singapore.

In the course of past 25 years, all Nepali citizens have been witness to what happened to their country and its people. Following the 1990 peaceful revolution, democracy turned into a dirty game in less than a decade. Public frustrations mounted. The Maoists capitalized on this and started a new movement. They engaged the country in war for a decade and kept inspiring larger community who saw no hope in democracy.

Like the democratic wave of 1990, the Maoists were successful at raising issues of inclusion, equality, equity and prosperity across the country. However, their public trust also started eroding after only a couple of years following the first Constituent Assembly election of 2008. Despite the bloody war and enormous public sacrifice, the Maoists failed the country and its people.

If we minutely observe the social psychology of the country, we are in a most difficult time in our history. Definitely, in every aspect, we are better than the panchyat era but that comparison is wrong and does nothing to tackle our present-day challenges.

Every day Nepali society is deviating from the ethos of hard work. This is the single biggest threat to our prosperity and stability. In the past 25 years, our dependence on foreign aid has increased rapidly, in every field, from food to energy, health to education, employment to entertainment. Such dependency has long-term damaging impact in our social psychology. The country is seduced by the idea of “impossibility”, resulting in the culture of mass migration. We do not need experts to explain the fate of country like Nepal where cynicism imprisons social psychology and young workers, both skilled and unskilled, are encouraged to migrate in search of better opportunities. I often wonder if we, as a society, are headed on the path of death.

In terms of doing wrong and harming the society, we can observe fundamental similarity, though the agencies are different, between pre- and post-1990 Nepal. In pre-1990 Nepal, Ranas and Shahs were accountable for stunted collective growth of our people and the society. A handful of families had ruined the country. But in post-1990 Nepal, we are collectively headed in the wrong direction under the banners of people’s representatives.

It’s clear that after such a long struggle, party leaders have failed to internalize the notion of equality before law. They have surrendered their political ideologies to mafias. How long can we view such morally corrupt leaders, who have transformed this place into a shadow of mafia and loottantra, as legitimate leaders of Nepal?

After nearly three decades of struggle for democratic republican Nepal, I feel we need another peaceful and non-violent revolution to establish rule of law, making corrupt politicians accountable for their actions. The new generation must come forward to lead this revolution, which is the only way for our generation to emerge from this vicious trap of corruption and mafiatantra.

The author is a social rights activist

JHAPA, Aug 20: Manohari Neupane and his wife Kamala had a narrow escape from serious accident on Friday noon as... Read More...