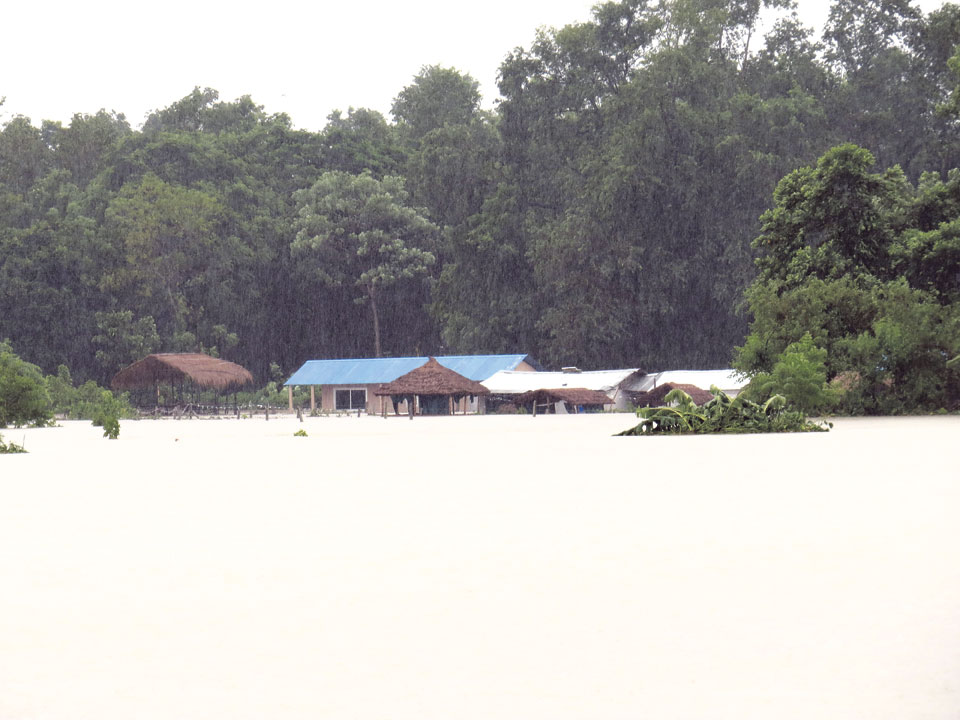 CHITWAN, August 13: While floods and landslides have claimed dozens of life and displaced hundreds of people across the country, Sauraha, a prime tourist hub has also been unaffected equally. Swollen Rapti and Budhi rivers have inundated areas near their banks and floods have entered settlements. There are 110 tourist hotels and dozens of restaurant in Sauraha and all of these have been flooded to varied extent.

“There is water all around. Flood has entered the hotels and restaurants. Except for one or two of facilities in the area, all are affected,” said Suman Ghimire, president of Regional Hotel Association, Sauraha. He added that the situation is very chaotic.

Chitwan has been receiving incessant rainfall since Friday night and flood entered the Sauraha area on Saturday night. “It must be around 11 pm yesterday night when flood entered here. There is hardly any house or building left unaffected by it,” said Jeetu Tamang, a nature guide in Sauraha. According to him, riverside cottage and pubs have been washed away by the flood.

“We could not do anything to save the pubs and cottages in front of the forceful floods. It washed the pubs and all the belongings inside,” Tamang narrated. Along with the flood swept away some motorbikes and bicycles, he said.

Rapti River flows on the southern side and the Budhi River on northern side. Both of these rivers are priced assets of the area in other times. But in monsoon, they always threaten the very town. According to Tamang, the rivers affect to varied degrees every monsoon. “As the place is surrounded by two big rivers on two sides, this place is always vulnerable to the very rivers that also make it a great leisure destination,” he said.

Tamang said, this year, the floods were forceful and claimed that he has not seen such floods for a long while now. “On Friday and Saturday, rainfall was much heavier than expected. As long as I remember, this had not happened for several years,” he noted.

Actual loss of property and assets remains yet to accessed, said Damodar Regmi, secretary of the hotel association. Once the water level gets down and things go normal, the loss will be appraised, he added. “The flood has incurred huge damages here. None of the houses here are dry.”

In the chaos that followed the floods, tourists in the area have been taken to safe place using elephants. The floods damaged the bridge over Rapti River at Chitrasari area disconnecting Sauraha from Ratnagar. Vehicular movement along the route came to a grinding halt, forcing entrepreneurs to transport tourists using elephants, Regmi said.

“Due to the flood, tourists were stuck in Sauraha. They were forced to stay in submerged hotels and restaurants. Later, we took them to safe locations by using elephants,” Regmi said. “It was a very challenging task but we somehow did it successfully,” he added.

“As the roads are fully inundated we had to transport tourists on tractors and carts till Chitrasari. To cross the river, we used elephants,” he elaborated adding that it took the whole of Sunday to rescue around 600 tourists that were in the area.

None of the tourists, he added, were in a harmful situation. They were in safe conditions though the hotels serving them were affected. “Though the area was flooded, they were safe. But we could not take risk and we did all that was possible to ensure their safety.”

The flood has further added to hotel entrepreneurs' woes. The town that has been a popular destination among domestic and foreign tourists has been suffering from 'low tourist flow', this monsoon, has been further affected by the floods.

Prior to this, earthquake in 2015 and the Indian economic blockade later affected tourism in Chitwan among other regions of country. Later on poor road condition of the Naryanghat-Mugling road has been severely affecting flow of the tourist to the town.

KATHMANDU, July 22: A farm that is a major supplier of cut flower to the capital city has been badly damaged... Read More...