In memory of the man and Yami Chhen which had him 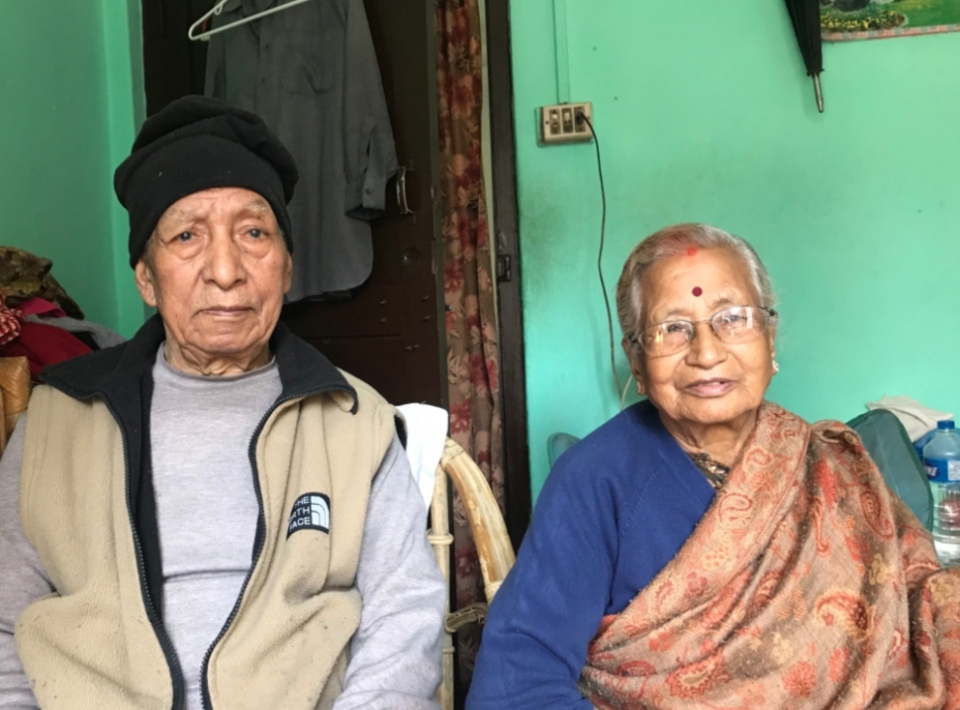 Yami Chhen, the historic house that stood as a symbol of inclusion, was destroyed in 2015 earthquakes. Machama Maharjan, the living memory of that inclusive spirit, passed away last week.

Machama Maharjan passed away quietly under the supervision of 82 years old Ram Maya Pode (known by Haku in our house) who must have been among the oldest Newar couples living together in Kathmandu without marriage. He was 90.

Machama was only 12 years old when my mother, Hira Devi Yami, decided to bring him in our spacious seven-ropani compound with five-story mansion-like building in Bhurunkhel where we the seven children were brought up. Machama had lost his father and his mother had abandoned him. He not only helped in farming in our spacious compound but also cooked food for us. At the time of his arrival, my mother was being helped by Purna Maya Pode, grandmother of Haku Pode. Haku then was four years old and used to accompany her in our house.

This was in 1951 when my father Dharma Ratna Yami became Deputy Minister under the Prime Minister Matrika Prasad Koirala. Known by ‘Yami Chhen’ this house had hosted eminent persons like Dr B R Ambedkar, the chief architect of the constitution of India and the Buddhist crusader for Dalits’ rights, and Rahul Sankrityayan, also called the father of Indian Travelogue and a Buddhist scholar, who had mentioned the house as a place where a practical battle was fought against caste hierarchy and untouchability.

Yami was the second Newar to become the minister after Ganeshman Singh. He had called Newar guests to a feast in celebration of being a minister and they were served by his Pode helper. This created a big uproar in the feast and half of invitees left the feast halfwaywithout  eating anything. Remaining half ate but they later went to ‘clean’ in river to ‘purify’ themselves.

My parents decided to hatch chicken at the topmost floor—the most revered floor in traditional Newar belief system and which is thus supposed to house a kitchen—of our house facing the main road that joined Asan and Bhagwanpau in Swayambhu. This again brought roars of objection from orthodox Newars as poultry work was looked upon as untouchable by the so-called high caste Newars such as the Tuladhars. These Newars used to call our father Wen, (weird) and they used to call us wein ya macha (children of weird man).

Later on Haku became regular in helping in kitchen work—cleaning the house, utensils and fetching water etc. Haku often had to face the ire of our orthodox relatives who would often ask uncomfortable questions like ‘who fetched this water?’ and ‘who washed this utensil?’ Some of them would look at her with disdain and rewash the utensils she had already washed only to humiliate her. But she would laugh at them because my parents treated her as one of us.

Machama and Haku started to live together when they became adult in a room given to Machama on the ground floor. Allowing the two unmarried helpers—one Maharjan and other Pode (Dalit)—to live together without nuptial tie was indeed unusual in those days.

Not only that we the six daughters were never made to feel that one day we would be married and leave the big mansion house. We were not initiated to any ‘Ehee’ marriage or bel marriage during our pre-adolescent ages. Similarly we were never initiated to ‘gufa’ where pre-menstrual daughter is kept in dark room before getting her married to the sun on the 12th day of entering ‘gufa’. Nor our only brother underwent ‘Ketapuja’ initiation ceremony before a boy enters adulthood. In fact, they never allowed us to be under the spell of god.

I remember when I as a child I offered alms to the stone god on the way to Swayambhu hill watching others do so, my father scolded me not to do. He said I rather give the money to beggars who will make better use than the money given to the god.  My parents were indeed unique. They were much ahead of their time. They were both the product of anti-Rana Movement during which they had been arrested several times.

My father would boast that he would get his daughters married to four different directions to different castes and communities. Almost the same happened to come true. My eldest sister, a medical doctor, married a Hindu high caste Newar Rajbahndari (we belonged to Tuladhar, a Buddhist and a business caste). Similarly my second eldest sister Timila Yami, an electronic engineer, got married to Magar Thapa hailing from Kaski district. My immediate sister Dr Kayo Yami, a PhD in microbiology married a Brahmin hailing from Biratnagar. Myself, an architect, married a Brahmin from Gorkha, the western Nepal.

The other two sisters who became campus chiefs of Padma Kanya Campus and Thapathali Engineering Campus had arranged marriage within our caste.

When Ambedkar came to stay in our house in 1956, he must have noticed that he was being served by 26 years old Machama Maharjan considered of inferior caste by high caste Newars and by 18 years old Haku Pode, a Dalit of lower rank within Dalits!

Similarly, Rahul Sanskrityayan who visited our house several times in route to Tibet must have been impressed by the working relations between the two helpers who must have served him too. Rahul was in fact so impressed by our father’s life that he wrote a booklet Dharmaratna Yami: Aaj ke Nepalka Sipahi published in 1954 in Hindi language. In the book Dharmaratna Yami: Smritigranth many Nepali politicians that my father knew remembered Machama as a reliable mature man who was sent by my mother to deliver cauliflowers and other green vegetables to the needy politicians.

Today, Yami Chhen, the historic house is no more in Bhurankhel as it was completely destroyed by 2015 earthquakes. Since then Machama had moved in Haku’s house in Fasikeba. It was in this second ‘home’ that he quietly passed away, looked after by Haku his companion and her cousins. Thank you Haku and her family who looked after him selflessly.

We are proud to say that they were responsible for bringing us up in the manner which made us who we are now: Engineers, doctors, Phds etc. When my brother married, one of our relatives in fact introduced Machama to the new bride as ‘sapa maduma maju’ (a mother-in-law without a hair bun)! They inculcated in us the importance of inclusive values in our life. After losing my mother at the age of 10 and father at the age of 16 they were the ones who played the role of parents for us in that big house with big family.

Sad thing for me today is Machama is no more. Yami  Chhen, the inclusive house, is no more.

Haku lives as a living memory of the inclusive spirit of the house.

Memories of my country

One specific work of art, which won the National prize in the installation category, was titled “Memories of my country”.... Read More...