How amazing would it be if we could communicate through brain signals and interpret complex thoughts within? Although a farfetched idea, it actually has been made possible with the invention of β-AT (Beta Assistive Toolkit) that detects the brain waves of patients with locked-in syndrome, cerebral palsy and paralysis with impaired hearing and vision.

A high-school graduate from St. Xavier’s College, Yugesh Pandey and A-level student, Ankit Shah conducted research into a system that would potentially serve people with severe motor neuron diseases who are unable to express their thoughts verbally. They have come up with self-designed software called β-AT that reads the brain waves of patients and reports the patients requests through the ‘β-AT Caretaker’s Notifier App’ to their caretakers. Under constant supervision of Professor Basant Pant, they pioneered the concept of introducing β-AT for the first time in Nepal.

Having known each other since their school days, Yugesh and Ankit grew up experimenting in the field of science and technology. Their path headed in a progressive way after they achieved frequent success in experiments and exhibitions. Participating in various exhibitions, winning inter-college and national competitions further strengthened their motivation.

Their journey of struggle started when they initially generated the concept for their project in 2014. It took them two more years to plan, brainstorm and organize the project. With a well-developed outline of the project in 2017, they started gaining hands-on experience on it. After extensive research at NAST (Nepal Academy of Science and Technology), the team of two finally came up with the β-AT system.

Despite a long period of hard work, a few requirements had to be fulfilled in order to turn the concept into a reality. The authenticity and validation of the device was scrutinized. Moreover, by conducting presentations for the project, the team managed to get ethical approval from NHRC (National Health Research Council) giving them authority to conduct clinical trials on paralyzed and patients of cerebral palsy.

The developers grew hopeless at times as it took them four months to get approval from each source. For them, implementing the idea was tougher than developing the idea. “There aren’t any platforms for youth research and inventors to flourish. It is tough for an individual to prove one’s worth and potential,” says Pandey. Adding to that, Shah says, “The discouraging fact is that we are politically influenced in every manner which is a major hindrance to our work.”

Although the journey was tough, they did not give up on their dreams, proved their united attempt and willingness to embark on a journey no matter the number of hardships it invited. 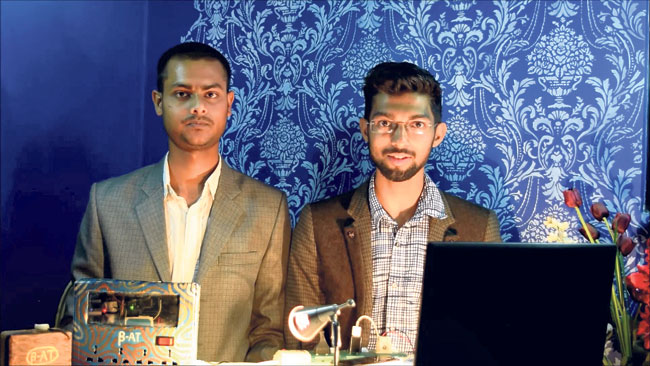