Honey hunting; A tale of a lifetime

I got a call from locals as an invitation to document wild honeybees (Apis Dorsata Laborasia) hunting, the largest in the world. I had heard the honey collected in the Himalayan cliffs carried a lot of nutritional, medicinal, aphrodisiacal and hallucinogenic properties. So I wanted to see that adventure and capture some moments through my lens. Next morning, I trekked into the rugged terrains of Lamjung to a village called Tajee that lies in the lap of mountains. On the third day of leaving my home, at dawn, I hiked into the deep jungles with local friends.

A team of 8-9 men from Gurung community was gearing up for the most anticipated day of their year, The Hunting Day. They were in the middle of the jungle settling in a camp under trees for last four days – cutting busses and tress, making a ladder on the river, breaking landmass, fixing natural ropes cutting tree vines, carrying braided bamboo rope for climbing and doing all preparation that needed to be done.

Some men were preparing food at the bank of showering local river “Dordhi", while some were already up on the cliff to fix ropes. They shared their food with me and after succulent "Dal Bhat" we headed towards the cliff. In the thirty-minute walk, every step I took was a battle between life and death. If I slipped, there was only thin possibility that they would find my bones back.

As soon as I reached the place, hovering aggressive wild honeybees welcomed us. I was to sit as a statue to avoid the bees as even my small gesture would provoke them.  But the hunters were running to and fro as if it was their playground and those bees seemed to have a mystical connection with them.

Within no time, hunting began. With bare hands and foot, clad in just T-shirt and pajamas without any protection, they started their task where a single mistake would cost lives. "If I slip, I will break myself like an egg smashed on the concrete floor," Daley Gurung, one of the hunters, said to me.

There were astounding coordination and task division in the group. Young fellas were busy creating smoke burning from green leaves to distract bees and make them docile while the experienced ones were using their years of expertise to handle the risky and tough tasks.

“We destroyed their house, took all their food and killed the children. It's pretty normal to get few stung on the body. Let’s image if this happened to us, we would use entire force, call the police to defend our property and children, wouldn’t we? They let us do whatever we want. It’s their gratefulness and mercy towards us.” Man Bahadur Gurung, 60, one of the veteran honey hunters said this with a smile on his face. He learned this skill from his elders when he was 15, and this year marked his 45th hunt.

All day, my family picture was swirling on my head, as survival was the only thing I could think. I was just below the hunting place next to smoke sitting on the hanging cliff, taking photographs with cloth mask on my face. I was forbidden to test honey reminding the potential damage it can cause because of its hallucinogenic property, as I was to descend back that deadliest cliff. Countless bees came to my face/body and did catwalk. If I move, they will sting. At times, I was to stop my heartbeat. But still then, I was stung profusely on the face and body. I counted until 30 stings. My eyes were glued to the work of the audacious hunters who risked their lives to carry out their tradition and made living out it. My face was burning so bad as if someone had rubbed spicy chilly all over it. I had to deepen my head inside chilling water to heal it for sometimes.

With some honey in the backpack, I was marching toward human settlements talking with the hunters. I was deeply saddened to know that after all this ordeal, they would earn less than $50 per person selling all the honey. But on the brighter side, I felt so lucky to have survived the torment and witnessed a totally different adventure of life. I wanted to cry out loud in the middle of the dense forest and inform everyone that I made back safe with profound joy, a lot of memories, good photos to share, and some honey for my mom. I felt the immense joy of being alive.

Kafle is a travel blogger/photographer associated with www.bestmadhoney.com and is an undergraduate student at Institute of Agriculture and Animal Science, Lamjung. 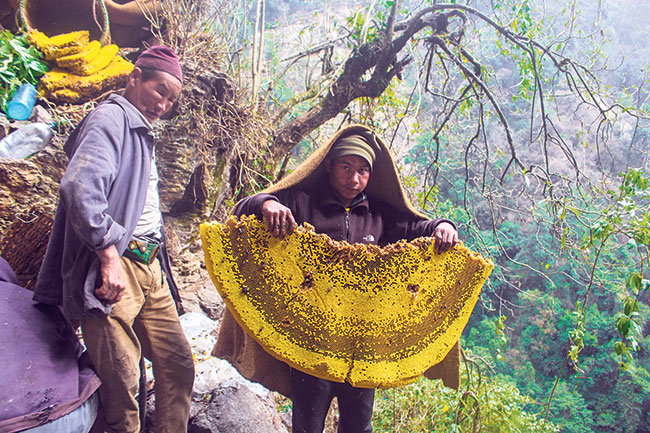