KATHMANDU, Oct 12: The arrival of Chinese President Xi Jinping in Nepal is likely to affect air movement in Tribhuvan International Airport (TIA) as the domestic and international flights will be halted for two hours on Saturday.

President Xi is scheduled to land at 4:30 pm for which the TIA has directed the airlines to postpone their commercial flights between 2:55 pm to 5:25 pm on Saturday and 11:20  am to 1:50 pm on Sunday. The airport will remain shut for two and a half hours each on Saturday and Sunday. 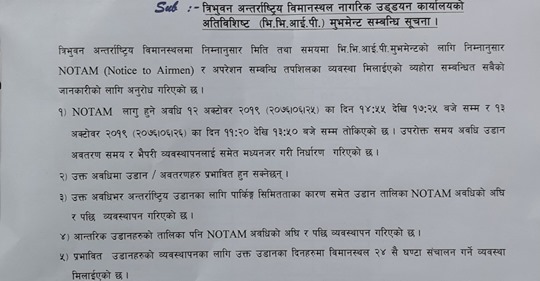 The TIA, issuing a Notice to Airmen (NOTAM) on Friday, said that the flights will be affected between the stated periods. According to the officials of TIA, only 3 aircraft parking out of 9 spots will be available. The domestic flights will operate before and after arrival and departure of VVIP, according to the TIA.

The Chinese president’s departure from Nepal is scheduled at 1:00 pm on Sunday, for which the airport will remain shut for commercial flights for two and a half hour. However, the airport has announced to remain open for 24 hours to adjust the affected international flights on both days. The operation is expected to be normal from Sunday after Xi’s departure from Kathmandu.

As a sole international airport, the TIA’s rescheduling of commercial flights hampers passengers commuting through air on every arrival of VIP or VVIP to the country.

President Xi is directly flying to Kathmandu from Chennai at 1:30 pm where he and Indian Prime Minister Narendra Modi are scheduled to hold second informal meeting. The meeting is said to be a continuation of Wuhan Summit held in China in April last year.

Xi is paying a state visit to Nepal in response to the friendly invitation of his counterpart President Bidya Devi Bhandari. During his stay in Kathmandu on October 12 and 13, Xi will meet with Bhandari and hold delegation-level official talks with Prime Minister Khadga Prasad Oli.

According to the Ministry of Foreign Affairs, following the talks, both leaders will witness the signing of bilateral agreements and memorandums of understanding. Bhandari will host a banquet in honor of the Chinese president and his delegation at Soaltee Hotel.

The visit of President Xi is considered a historic event as such high-level visit is taking place after 23 years. Jiang Jemin, the then Chinese president had paid a visit to Nepal in 1996 at the invitation of late King Birendra.