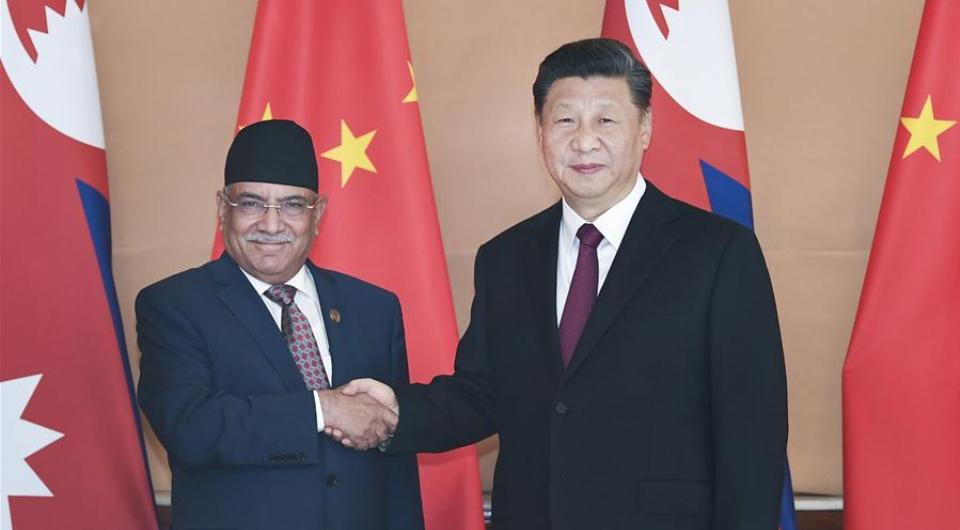 Addressing a tea reception hosted by the NCP in the capital on the occassion of Dashain, Tihar and Chhath festivals, Co-chairman Dahal called for forging trilateral partnership between China, Nepal and India.

"I had taken up the matter of forging trilateral partnership between three countries during my talks with top leadership of China and India a couple of years ago. I believe that the recent visit of Chinese President Xi to Nepal has laid a foundation to materialize this idea," he said.

Co-chairman Dahal said that President Xi's visit is a watershed moment in the bilateral ties between Nepal and China.

"Xi's visit to Nepal has multiple dimensions and one of them is about laying the foundation for forging a trilateral partnership between China, Nepal and India," he said.

The visit of Chinese visit has added a new avenue in Nepal's foreign policy; Dahal said adding that the agreements reached between the two sides will be beneficial in the long run.

"Chinese President Xi's commitment to helping Nepal to realize its dream to transform itself from landlocked country to land-linked country suggests that our bilateral cooperation has entered a new era," Dahal said adding that the idea of forging trilateral partnership between China, Nepal and India contributes to Nepal's desire to achieve socialism.

Dahal said that recent talks between Chinese President Xi and Indian Prime Minister Narendra Modi over the prospect of having "two plus one" format for dialogue is a welcome news at a time when Nepal is pushing forward the concept of trilateral partnership between China, Nepal and India.

According to Indian and Chinese media reports, China and India have held talks over the possibility of forging “China-India Plus” cooperation in South Asia to promote free trade, infrastructure development and regional cooperation initiatives like the BCIM cooperation, harmonize policies and development strategies of all countries, strengthen cooperation in the fields of energy conservation, poverty alleviation, environmental protection and climate change, and achieve common prosperity. The issue was also taken up during a recent informal meeting between Chinese President Xi and Modi in Chennai, India, it is learned.